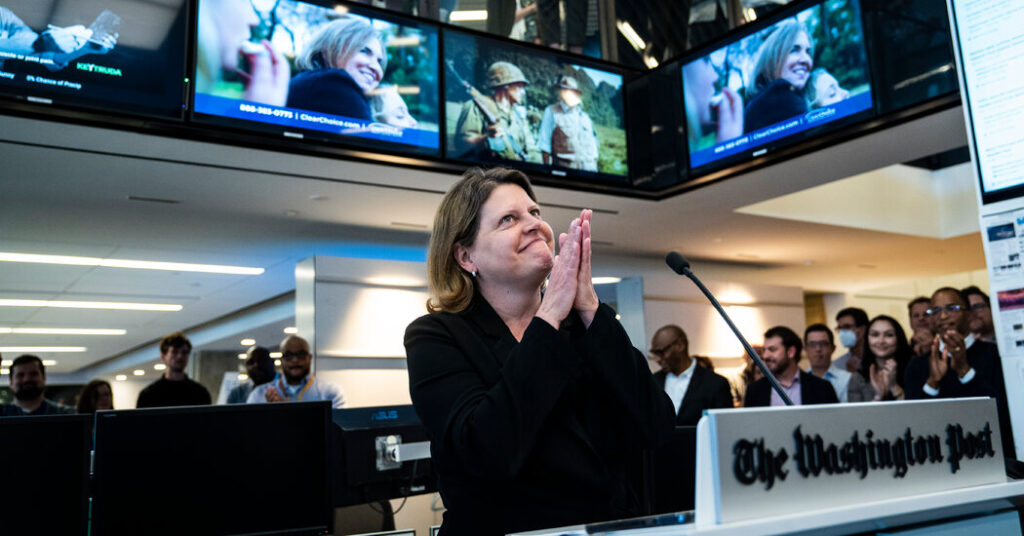 
When Sally Buzbee joined The Washington Post a year ago this month, she took over a newsroom that had nearly doubled to more than 1,000 journalists under the ownership of Jeff Bezos, who bought it in 2013. Its coverage regularly won Pulitzer Prizes.

The newspaper has continued growing in the months since. It has opened breaking news hubs in Seoul and London to become more of a 24-hour global operation. It expanded coverage of technology, climate and personal health. Its reporting won the Pulitzer Prize for public service this year.

But Ms. Buzbee is now on the defensive, yet to completely win over the newsroom and facing internal strife that has eclipsed some of her bold plans.

Internal frustration with Ms. Buzbee has spilled into public view. Much of it resulted from two social media storms — one that led to a reporter getting fired, and another that led to accusations that a feature editor’s promotion was unfairly rescinded. Many journalists at the newspaper say the problems resulted from an outdated policy on how employees should conduct themselves online, and a star system that has led to uneven enforcement of that policy. Ms. Buzbee released a draft of a new social media policy on Wednesday.

Some in the newsroom also feel that Ms. Buzbee has not made a priority of meeting with the rank-and-file to address those frustrations. Other workers have chafed over her return-to-office requirements, and tensions have flared between the national and metro reporting teams.

In a contentious meeting last week, some staff members told Ms. Buzbee that she had not yet earned their trust, according to several people among dozens in attendance. Margaret Sullivan, the newspaper’s media columnist, told Ms. Buzbee in that meeting that rescinding the feature editor’s promotion would unfairly damage his career. Many others spoke up with a similar sentiment.

In another meeting with Ms. Buzbee, on Tuesday, one editor relayed concerns from his staff that being promoted to an editor role seemed an unappetizing prospect at The Post. Ms. Buzbee responded with an impassioned speech about how an editor’s job was to help people do great work and advance in their careers, according to a person at the meeting.

The sentiment about Ms. Buzbee, and details about the meetings, were conveyed in interviews by more than two dozen current and former Post staff members. They spoke on the condition of anonymity to describe the newsroom’s inner workings.

Many of the people noted that some of the concerns predate Ms. Buzbee’s arrival. They also said that her arrival during the pandemic, with most people working remotely, has made her job more difficult. Ms. Buzbee has won many friends in The Washington Post newsroom, they said. Numerous influential reporters tweeted in unison last week in support of the newspaper’s direction.

Fred Ryan, The Post’s publisher, expressed support for Ms. Buzbee, saying in a statement that “Sally has exceeded all expectations in her first year.”

But the recent tumult has distracted Ms. Buzbee and a newsroom that has stood out as one of the few to successfully navigate the treacherous economics of modern media.

Cameron Barr, The Post’s senior managing editor, said in an interview that a lack of clarity around the company’s social media policies was partly to blame for the recent tumult.

“Social media in this context is really a proxy for newsroom culture,” Mr. Barr said. “We have work to do to shore up a sense of trust and civility within our newsroom,” he added.

He disputed characterizations of Ms. Buzbee as unavailable to people who are not stars. “She is very accessible,” he said. “She is very enthusiastic about what we do.”

Ms. Buzbee, 57, joined The Post in June 2021, becoming the first female executive editor in its 145-year history. She had spent her career at The Associated Press, most recently serving as executive editor. She replaced Martin Baron, who remade the newsroom over eight years to much acclaim, including 10 Pulitzer Prizes.

Ms. Buzbee resembles Mr. Baron in her approach to stories and has strong news judgment, according to numerous reporters who have worked closely with her. The reporters praised how she handled complicated stories.

Ms. Buzbee has a different management style from Mr. Baron, though. While he was widely regarded as a top-down leader, Ms. Buzbee is known as someone who listens to everyone in the room before making decisions. She holds more meetings with senior editors and reporters than Mr. Baron did, people at The Post say.

Ms. Buzbee has told all newsroom employees that they must work in the office at least three days a week. She has highlighted the benefits of collaborating in person rather than punishing anyone for not coming in.

That return-to-office plan has upset some employees. At least two people who left the newspaper recently said — one publicly, on Twitter, and another in an interview — that the policy had been a major factor in their decision to depart. Some have been reluctant to follow the policy, leading Ms. Buzbee to urge managers to remind their employees to come into the office.

There has also been friction between the metro and national reporting desks. In a meeting last year, the metro staff raised concerns to Ms. Buzbee that they had not been adequately involved in a project reconstructing the events of the Jan. 6 Capitol riot, according to multiple people there.

The project, assigned before Ms. Buzbee joined, was run by the national desk. That frustrated some reporters on the metro desk, who had extensively covered the event as it unfolded. Ms. Buzbee agreed that the metro reporters should have played a bigger role in the project, which ran after she took over.

The Post ultimately submitted many stories from the metro staff, as well as the reconstruction project, in the package about Jan. 6 that won the Pulitzer for public service. A Post spokeswoman said the metro entries had been included before the meeting with Ms. Buzbee was requested.

Ms. Buzbee inherited a policy about how Post journalists should behave online that reporters and editors had repeatedly said was too vague and unevenly enforced. Mr. Baron faced similar tensions under his tenure, including a clash with a star reporter, Wesley Lowery. Mr. Baron threatened to fire Mr. Lowery for violations of The Post’s social media policy, including expressing political views and criticizing competitors, according to a copy of a disciplinary letter.

A memo prepared by the national staff in 2020 recommended that the policy be overhauled to redefine the newsroom’s purpose on social media, acknowledge the abuse journalists receive online and create a more transparent enforcement process.

Ms. Buzbee told people that she planned to hire standards editors who would update that policy. The person Ms. Buzbee promoted to oversee the standards team in March hadn’t yet filled those positions when the internal frustrations recently erupted on Twitter.

Much of the infighting began after David Weigel, a politics reporter, retweeted a sexist and homophobic joke. In response, Felicia Sonmez, another political reporter at The Post, tweeted: “Fantastic to work at a news outlet where retweets like this are allowed!”

Mr. Weigel quickly deleted his tweet and apologized. Several days later, with several staff members fighting about his actions online, Ms. Buzbee suspended him for a month. In emails, she implored Post journalists to be collegial. After an employee replied to everyone in support of Ms. Sonmez, The Post cut off the ability for staff members to reply-all in a newsroom-wide email, according to a person with knowledge of the decision.

But Ms. Sonmez, who had accused The Post of a hostile work environment in a lawsuit that a judge dismissed in March, never stopped tweeting. She said the newspaper unevenly punished journalists for what they wrote on Twitter, and critiqued her co-workers publicly.

Mr. Ryan and Ms. Buzbee agreed that the only option was to fire her, according to a person with knowledge of the discussion. They met with top editors to talk through the decision. Some suggested other options, including a suspension. Eventually, there was broad agreement that Ms. Sonmez had to go, the person said.

Ms. Buzbee planned to fire Ms. Sonmez the next evening, June 9, the person said. But after Ms. Sonmez tweeted early the next morning, the timeline moved up a few hours. The termination letter sent by The Post accused her of “insubordination, maligning your co-workers online and violating The Post’s standards on workplace collegiality and inclusivity.”

Less than an hour later, Ms. Buzbee met with the features department to quell another social media flare-up.

Taylor Lorenz, a technology reporter lured to The Post from The New York Times this year, had tweeted that a miscommunication with her editor led to an inaccurate line in an article. The tweets were discussed and agreed on by Ms. Lorenz and multiple editors before she posted, said three people with knowledge of the discussions. The tweets prompted an outcry from critics on Twitter who accused her of passing the buck.

Before Ms. Lorenz’s tweet, Ms. Buzbee had offered the well-respected editor, David Malitz, a promotion to run the features department, according to one person with knowledge of the offer. He had agreed to take it. But several days later, Ms. Buzbee pulled the offer.

In the meeting with the features group, Ms. Buzbee fielded angry questions about Mr. Malitz’s treatment. She said he was “in no way reprimanded or punished for any errors,” according to a copy of notes taken at the meeting, but would not say what was behind her decision. She said she couldn’t talk about personnel issues.

It was at that meeting that Ms. Sullivan, The Post’s media columnist, accused Ms. Buzbee of damaging Mr. Malitz’s career, and other staff members said that she hadn’t earned their trust. Some told Ms. Buzbee that their doubts stemmed from rarely hearing from her until that meeting.

On Tuesday, Ms. Buzbee met with dozens of editors in person and over video conference, fielding questions about the recent upheaval. One editor relayed the concerns from employees who were wary of becoming editors at The Post after recent events.

Ms. Buzbee said in the meeting that she was optimistic about the future of the newspaper. She also told editors that it was their collective responsibility to protect the staff, the readers and the newspaper’s credibility.

On Wednesday evening, newsroom employees were emailed a draft of updated social media guidelines and told that senior editors would hold “listening sessions” this week to get feedback on the revisions.

The draft says that no employee is required to post or engage on social media platforms; journalists must not harm the integrity or reputation of the newsroom; and journalists are “allowed and encouraged to bring their full identity and lived experiences to their social accounts.”

The draft guidelines also note that The Post considers it as a priority to protect its journalists from online harassment and attacks.