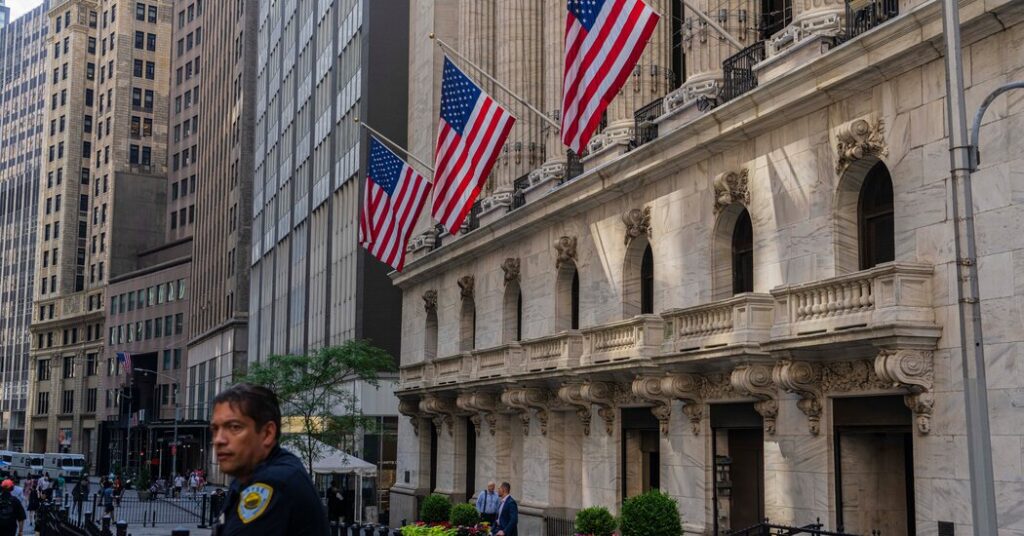 Investors Pin Hopes on Rosy Outcome for Inflation and Growth


Stocks have roared back from their low in June, as investors bet that inflation has peaked, even as the Federal Reserve signals that its campaign to cool the economy by raising interest rates isn’t over.

Higher interest rates are typically seen as bad for share prices, as they increase costs for companies. A chorus of Fed officials have insisted recently that the central bank will need to push interest rates even higher to slow stubbornly high inflation. And yet the S&P 500 has been on an upward march, registering gains for the past three weeks and rising more than 12 percent from its low on June 16.

Rather than worry that a hot economy could embolden the Fed to raise rates more aggressively, investors appear to be choosing to focus on receding recession worries, particularly because many expect the pace of inflation to start to slow.

A big test of this thinking will come on Wednesday, with the release of the latest Consumer Price Index data. The widely watched report is expected to show that overall inflation moderated in July, according to a survey of economists by Bloomberg, rising 8.7 percent compared with last year, down from a pace of 9.1 percent in June.

In recent weeks, a better-than-expected round of quarterly earnings reports from companies has helped buoy investors. Then, on Friday, fresh data showed that corporate America continued to hire new employees at a robust pace last month, a sign that the economy was proving resilient to higher interest rates. But it could also be seen as a sign that the Fed needs to do more to cool the economy and bring down prices, raising the risk that higher rates could tip the economy into a recession.

A Guide for Investors

The decline of the stock and bond markets this year has been painful. And it remains difficult to predict what is in store for the future.

“I think the ‘peak inflation’ argument has become so ingrained in the market’s psyche that the jobs report was interpreted more as being anti-recession,” said David Donabedian, the chief investment officer of CIBC Private Wealth Management.

Although investor expectations for where the Fed’s main interest rate will be at the end of the year have ticked higher this month, investors are still forecasting that the Fed will not only stop raising rates next year, but it will need to cut them somewhat. That’s a shift from where expectations were in June, when investors were more closely aligned with the Fed’s own forecasts that rate increases would continue through 2023.

The Fed may cut rates next year, in the optimistic case, if it turns out that inflation was tamed without tanking the economy and that tighter policy was no longer necessary. A survey of households released on Monday by the Federal Reserve Bank of New York showed a sharp decline in consumers’ inflation expectations, supporting the view that an inflationary spiral is not taking hold.

But Mr. Donabedian cautioned that investors may be overly optimistic even if inflation falls from current levels. If the headline inflation rate declines to 8.7 percent, that is well above the Fed’s policy target of 2 percent.

With such optimism driving stock prices, any shock that shows inflation accelerating could quickly drag financial markets lower. As a result, Alan McKnight, the chief investment officer at Regions Bank, said he was “less sanguine” than the financial markets appear.

August is typically a quiet month for stocks, with transaction volumes declining as traders step away from their desks for summer vacations, making prices more susceptible to sharp movements. The volume of trades in a $375 billion exchange-traded fund that tracks the S&P 500, which trades under the ticker SPY, fell to its lowest level since November last month.

The mix of these trading patterns has made interpreting the trends in financial markets — already grappling with rising inflation, rising interest rates and rising recession worries — even harder.

“It’s been an extraordinary economic environment for many reasons, right?” said Ben Snider, a market strategist at Goldman Sachs. “So it’s hard to say something is unusual or usual because everything has been unusual recently.”

The S&P 500 has inched lower in recent days, but the declines have been modest in relation to gains last month, suggesting that investors may be bracing for Wednesday’s inflation numbers before making their next meaningful move. The index fell 0.4 percent on Tuesday.