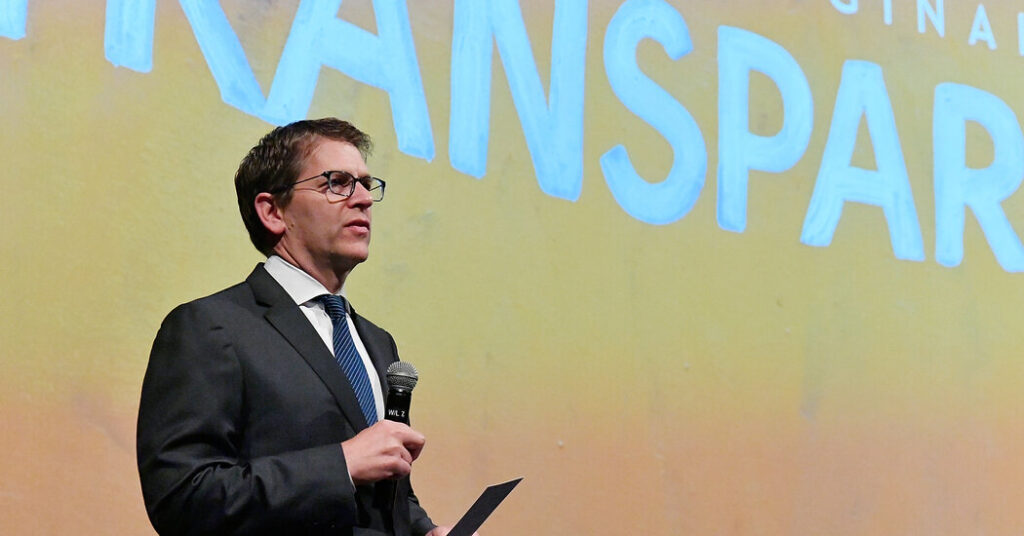 
SEATTLE — Jay Carney, who was press secretary for President Barack Obama, is leaving the top policy and public communications job at Amazon to join Airbnb.

Airbnb said in a blog post on Friday that Mr. Carney would become its global head of policy and communications.

Mr. Carney, a former journalist at Time magazine, joined Amazon in 2015 as its first senior vice president of global affairs, combining public relations and government lobbying as the company faced growing scrutiny. He fiercely protected Amazon’s image and that of his boss, Jeff Bezos, one of the richest men in the world.

Mr. Carney’s departure is one of several changes atop Amazon a year into the tenure of Andy Jassy, who succeeded Mr. Bezos as chief executive. Mr. Jassy, who previously built and ran Amazon’s cloud computing business, is known for his attention and interest in details and has dug into parts of the company that are newly under his control.

Dave Clark, the architect of Amazon’s logistics expansion, announced last month that he was leaving before a successor was named. John Felton, a transportation executive, replaced Mr. Clark as the chief executive of Amazon’s retail and operations business. Two of the company’s most senior Black executives, who were Mr. Felton’s peers, also departed.

Mr. Jassy announced Mr. Carney’s departure in an email to his senior leadership team, praising him for “his many significant accomplishments on behalf of Amazon’s customers and employees, for helping us build a strong set of capabilities in public policy and P.R..” The New York Times obtained the email.

“Everything about my time at Amazon has exceeded my expectations,” Mr. Carney said in an email to his team on Friday, which was also obtained by The Times. He did not provide a comment when contacted on Thursday.

Amazon faces more regulatory threats from governments around the world now than at any time in its history. The Federal Trade Commission, led by an Amazon critic, Lina Khan, is conducting a broad investigation into whether the company’s practices broke antitrust law. Lawmakers may also vote this year on legislation that would stop Amazon from favoring its own products, like batteries and trash bags, over those sold by competitors in its online marketplace.

Amazon’s public relations specialists and lobbyists have promoted the company as a signature employer and boon to local economies where it operates. In 2018, the company announced a minimum wage of $15 an hour, drawing praise from its frequent critic, Senator Bernie Sanders, independent of Vermont.

But Mr. Carney’s team got a black eye during Amazon’s search for a second headquarters, when in 2018 it underestimated the progressive backlash it would face in potentially building a major presence in New York. Amazon reversed course and chose another location.

Mr. Carney’s team also faced criticism after an official Amazon Twitter account dismissed a congressman’s concern last year that workers had to urinate in bottles while on the job. The company apologized.

More recently, Mr. Carney’s team has mounted a vigorous response to the antitrust legislation, which Amazon has said would make it difficult to offer its signature fast shipping of its Prime subscription service. The company spent roughly $9.1 million on federal lobbying in 2015. Last year, it spent $19.3 million.

Drew Herdener, who heads public relations under Mr. Carney, was promoted to senior vice president on Thursday, according to four people with knowledge of the internal announcement. The communications team has grown from 10 people to “several hundred,” Mr. Herdener said in an interview last fall, adding that Amazon had hired 200 communications professionals in the previous year alone.

As the company searches for a new head of global affairs, Mr. Herdener will report directly to Mr. Jassy, and the policy teams will report to David Zapolsky, the general counsel, according to the email.

Airbnb has been looking for its own head of policy and communications after Chris Lehane, a former aide to former President Bill Clinton, left for a cryptocurrency venture capital fund earlier this year.