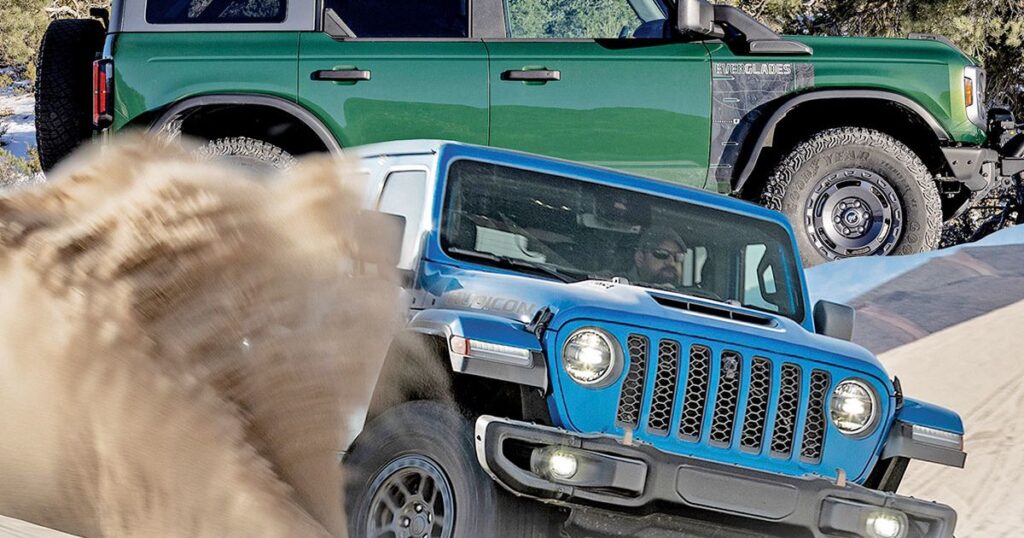 
Karl Brauer, executive analyst at iSeeCars.com, said he thinks Ford and Jeep both have to be satisfied with how their off-road rivalry is playing out so far.

The Bronco is “turning more people into adventure-seeking off-road enthusiasts,” Brauer said, “rather than taking some kind of fixed number of those and stealing them from Jeep.”

S&P Global said almost half of Bronco purchasers already have a Ford in the garage. The study found that Bronco customers tend to be slightly younger than Wrangler buyers, have marginally higher incomes and more often are men.

Anderson said the Wrangler has a cultlike following that is difficult to break into even if buyers like some of the Bronco’s technology. At this stage, he wouldn’t call it a sales race between the Bronco and Wrangler as much as it is a production battle, with Ford trying to fulfill a backlog of orders amid the ongoing microchip shortage.

“There was so much market anticipation and hype for the vehicle,” said Fernando Varela, owner of two Ford stores in Palestine and Kilgore, Texas. “What we’re doing is fulfilling orders for people that have placed orders for the last two years. They’re really not staying in inventory very long.”

Orders for the 2022 Bronco have closed. Anderson said he wouldn’t be surprised if Ford ends up selling out two or three years’ worth of Broncos before dealers are able to keep them in stock.

“I think the overall market is just going to grow” in the off-road department, Anderson said. “That’s where the Bronco’s going to step in and not necessarily gain market share from Jeep, but gain part of the new market share. That’s how they’re going to survive.”