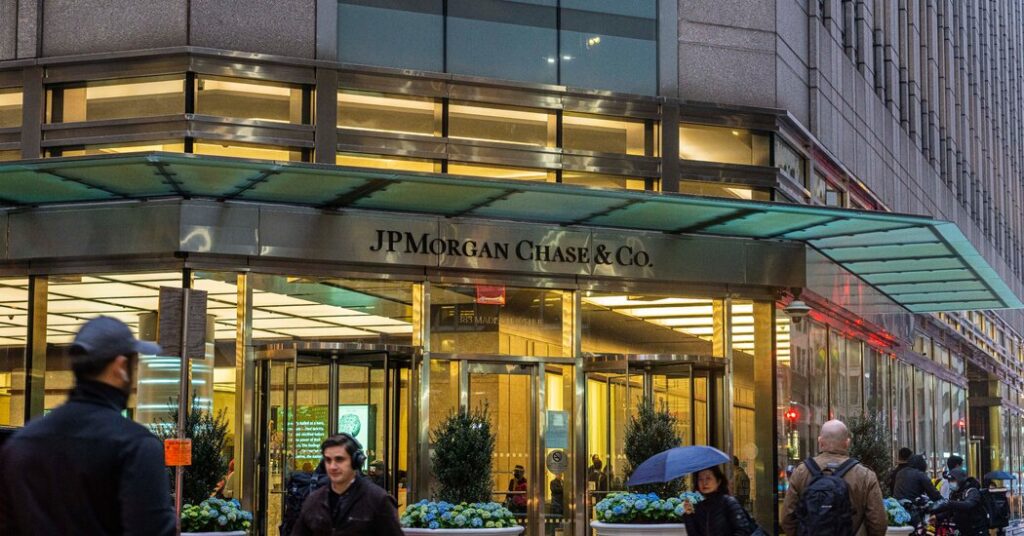 
JPMorgan Chase on Thursday reported a smaller profit for the second quarter than for the same period last year, set aside more money to cover potential loan losses and said it was suspending share buybacks. Those actions may be seen as preparation for a downturn, but executives at the nation’s largest bank said there were few — if any — signs that the U.S. economy was entering a recession.

Retail banking customers are still spending money on things they want but don’t need, like travel and restaurants. The businesses JPMorgan lends to are making more use of some credit lines.

“We’ve looked a lot very carefully into our actual data,” Jeremy Barnum, the bank’s chief financial officer, said on a call with reporters. “There is essentially no evidence of actual weakness.”

JPMorgan’s earnings were weighed down by sinking stock prices, slower investment banking activity and a softer market for home loans. It is feeling the effects of interest rate increases the Federal Reserve is making to combat steep inflation, which has roiled financial markets. Jamie Dimon, JPMorgan’s chief executive, said bankers were preparing for a potentially rocky year ahead.

“We are dealing with two conflicting factors, operating on different timetables,” Mr. Dimon said in a news release. “The uncertainty about how high rates have to go and the never-before-seen quantitative tightening and their effects on global liquidity, combined with the war in Ukraine and its harmful effect on global energy and food prices are very likely to have negative consequences on the global economy sometime down the road.”

JPMorgan earned $8.6 billion between April and June, 28 percent lower than the same period last year, but slightly higher than its first-quarter profit of $8.3 billion. It set aside new reserves in large part for potential losses on its loans in its consumer business, reporting a provision for losses totaling $1.1 billion. The bank’s latest earnings missed analyst expectations, hitting its stock, which fell about 5 percent at the open of trading.

But the bank is still issuing new credit cards, and card usage was 15 percent higher than last year. Spending on travel and dining was 34 percent higher.

For Wall Street, the fees the bank earned providing investment banking services, like advising companies on mergers and underwriting initial public offerings, fell sharply. They were 54 percent lower than the same period last year, contributing to a 26 percent drop in profits for its Wall Street business overall. But the quick and dramatic swings in the prices of stocks, bonds and other financial products caused the bank’s revenue to rise 15 percent from last year in its trading businesses, which thrive during times of volatility.

The Fed has been raising interest rates and stopped its program for buying bonds to stabilize the markets during the pandemic, causing big changes in the markets. Other banks are feeling the effects of this, too.

Profits at Morgan Stanley, which reported earnings on Thursday, also missed analyst expectations. The investment bank and investment firm’s earnings fell nearly 30 percent in the second quarter from the same period a year ago, to $2.4 billion. The recent market turmoil halted deals and caused fees from stock and bond offerings to plunge.

JPMorgan also announced that it was suspending buybacks of its stock — a way of distributing extra cash to shareholders — to more quickly build reserves of capital to meet reconfigured requirements set by regulators. Mr. Dimon told reporters that without the new regulatory requirements, the bank would “probably” still be buying back stock.