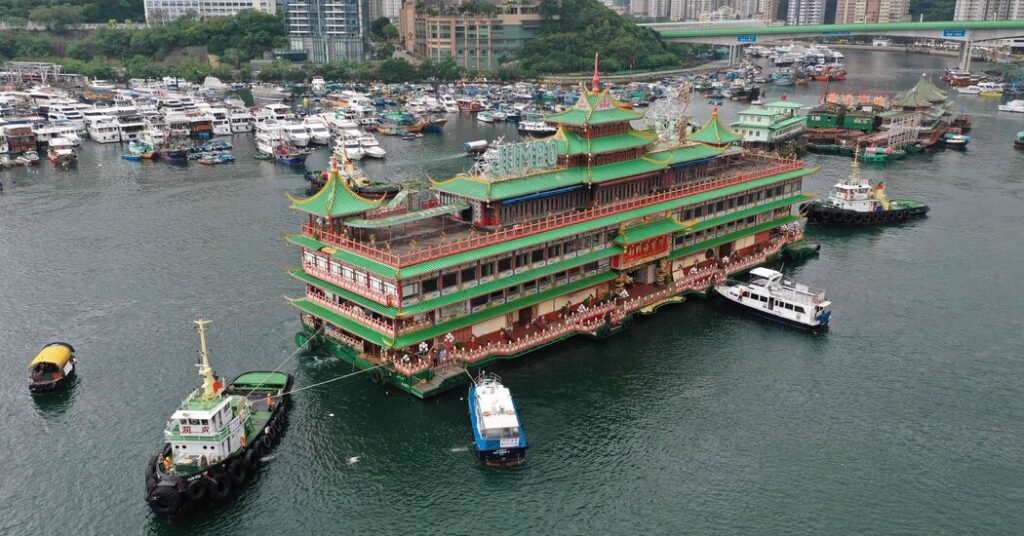 
When tugboats towed Jumbo Floating Restaurant away from Hong Kong last week, the giant vessel’s owner sent the public its “best wishes for a brighter future.”

That future now lies at the bottom of the South China Sea.

The 260-foot, three-story eatery capsized and sank as it was being towed through deep water over the weekend, its owner, Aberdeen Restaurant Enterprises, said on Monday. No one was injured, it said.

Jumbo’s loss reverberated across Hong Kong, a Chinese territory where the neon-lit colossus — built in the style of an imperial palace — had sat in the same harbor for nearly half a century. Generations of Hong Kongers celebrated weddings and cut business deals there over Cantonese fare like crispy pork belly and wok-baked mud crab. For many people in the former British colony, the restaurant symbolized a period of local history more optimistic than the present.

Jumbo’s demise comes at a time of immense upheaval in Hong Kong, one that began when anti-government protests convulsed the city for months in 2019. That prompted the Chinese government in 2020 to impose a powerful national security law on the territory that has since eroded what was left of its democratic institutions.

The turmoil continued through the pandemic, as border closures and social distancing measures wiped out thousands of mom-and-pop shops and threatened some of the city’s best-known businesses, including the popular Star Ferry.

At a time when the Star Ferry and other visual icons of Hong Kong are under threat, “it seems as if its most visible symbols are all disappearing one by one,” said Louisa Lim, the author of the book “Indelible City: Dispossession and Defiance in Hong Kong.”

“That, combined with the massive political changes brought in by the national security legislation, leave Hong Kongers questioning what will be left of their city,” she added.

Jumbo was opened by the Macau casino tycoon Stanley Ho in 1976 and was for years part of a complex called Jumbo Kingdom that included a smaller floating restaurant, Tai Pak. The larger vessel’s opening was delayed by a 1971 fire that killed 34 people and injured dozens of others, according to The South China Morning Post.

A number of celebrities visited Jumbo Kingdom over the years, including the actor Tom Cruise, the businessman Richard Branson and Queen Elizabeth II of Britain. Jumbo Floating Restaurant also featured in the 1974 James Bond film “The Man with the Golden Gun” and several local blockbusters.

In “Contagion,” a 2011 thriller about a global pandemic, a pivotal scene was shot at the restaurant: Gwyneth Paltrow’s character becomes the pandemic’s first victim by contracting a deadly virus from a chef.

Even as giant residential towers sprang up around Jumbo, its garish neon sign and imperial-style architecture still dominated the skyline around Aberdeen Harbor, on the southwest side of Hong Kong Island. And it was still a place where Hong Kongers went to make memories; Ms. Lim, the writer, wrote on Twitter last week that going there had been an annual ritual for her family.

By 2020, though, Jumbo had lost millions of dollars, and Hong Kong’s pandemic restrictions on dining and tourism forced the business to close. Aberdeen Restaurant Enterprises said at the time that it could not afford to keep up with maintenance and inspection costs, and it offered to donate Jumbo to a local theme park at no cost.

Later that year, Hong Kong’s chief executive, Carrie Lam, said that the government would cooperate with the theme park and local nonprofit organizations in “the rebirth of the floating restaurant.” But the plan fizzled, and Ms. Lam said last month that the government would not invest taxpayer money in the restaurant, which had accumulated losses of nearly $13 million over nearly a decade.

Jumbo was towed away from Hong Kong on June 14. Aberdeen Restaurant Enterprises declined at the time to say where it was going, though the company had previously said that the boat would be moved out of the city for maintenance and storage.

In a statement, the company said that Jumbo “began to tip” on Sunday as it was passing by the Paracel Islands, a chain of disputed islands in the South China Sea where China, Vietnam and Taiwan lay territorial claims. It said the accident occurred in an area where the water depth is over 1,000 meters, or 3,280 feet, “making it extremely difficult to carry out salvage works.”

Discontent among the population. The Chinese government’s censorship and surveillance, which the pandemic has aggravated, are pushing a small but growing group of Chinese to look for an exit. Younger Chinese in particular are embracing the view that they might need to flee the country in the pursuit of a safer and brighter future abroad.

A new trick for internet censors. To control the country’s internet, China’s censors have relied for years on practices like on deleting posts, suspending accounts and blocking keywords. Now they have turned to displaying users’ locations on social media, fueling pitched online battles that link Chinese citizens’ locations with their national loyalty.

An uncertain harvest. Chinese officials are issuing warnings that, after heavy rainfalls last autumn, a disappointing winter wheat harvest in June could drive food prices — already high because of the war in Ukraine and bad weather in Asia and the United States — further up, compounding hunger in the world’s poorest countries.

Stephen Ng, a spokesman for Aberdeen Restaurant Enterprises, declined to comment on speculation online that the boat might have been scuttled for insurance purposes. There was no immediate evidence to suggest foul play.

Not everyone liked Jumbo. Ho-fung Hung, a sociology professor at Johns Hopkins University who has studied Hong Kong politics, called it “self-orientalizing” and said it was not worth getting nostalgic over.

But for some residents, losing Jumbo was part of a pattern in which things they love about their hometown have vanished since the 2019 protests. A few social media users described the sinking this week as a “nail in the coffin” for the city. Others called it a “burial at sea.”

One popular illustration making the rounds on social media showed Jumbo sinking to the bottom of the sea as fish swim by.

In the illustration by Ah To — the nom de plume of a political cartoonist who recently emigrated from Hong Kong, citing the “great mental stress” he would suffer if he stayed — there are two statues on the seafloor. One shows a blindfolded woman holding a scale of justice that lies askance. The other is a woman who holds a torch and resembles the Goddess of Democracy, a protest symbol that was removed from a Hong Kong university campus last year.