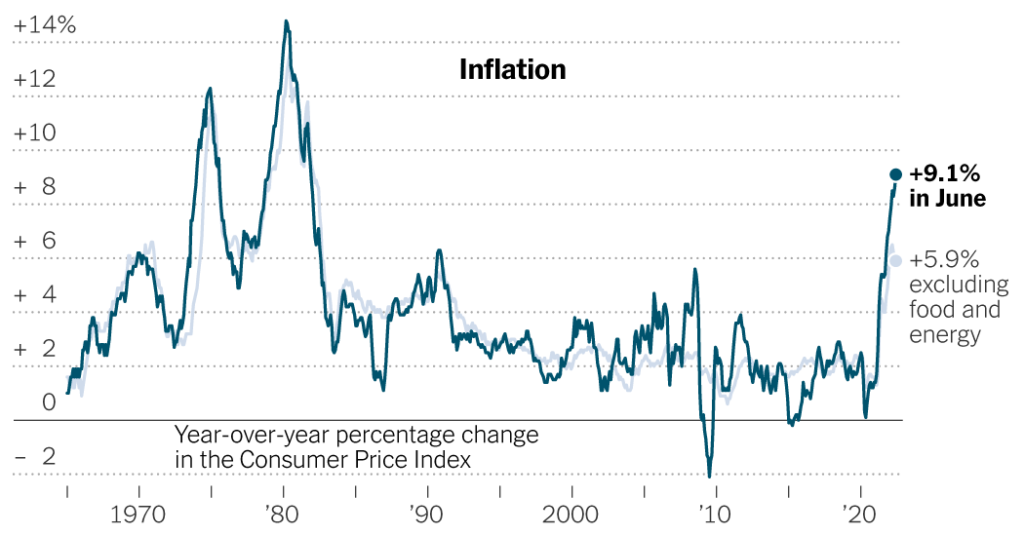 Prices in June climbed 9.1 percent from a year earlier, the fastest pace since 1981, as soaring gas prices, rising rents and swelling grocery bills made everyday life more expensive for American households. The pickup in prices was broad and faster than expected, spelling trouble for the Federal Reserve.

The inflation index, including food and gas, could slow down in July’s data because prices at the pump have moderated in recent weeks. The national average cost of a gallon of unleaded gas peaked at about $5 last month. This week, it was around $4.65.

But gas prices are volatile and could shoot up again. The report contained unwelcome news beyond the headline number. A core inflation index that strips out food and fuel prices — giving a sense of underlying inflation trends — remains high and came in faster than economists expected. The core index climbed 5.9 percent the year through June, barely a slowdown from 6 percent in the previous report. The core measure actually climbed 0.7 percent from May to June, more than the previous monthly increase and bad news for central bankers.

The question is whether that deceleration will last, and the answer is unclear. The global economy has been buffeted by a series of shocks that have not ceased since the coronavirus pandemic began. Factory shutdowns and shipping shortages have roiled supply chains, worker shortages are making it harder for airlines to fly at capacity and hotels to rent out rooms, and Russia’s invasion of Ukraine has disrupted oil and gas supplies. Economists have spent more than a year struggling to predict how and when inflation will settle back down.

“We now understand better how little we understand about inflation,” Jerome H. Powell, the Fed chair, said on a recent panel in Sintra, Portugal.

The Fed, which is tasked with keeping prices stable and guiding the economy toward full employment, is no longer waiting for normalcy to return. Central bankers are worried that as inflation remains high and stubborn, consumers and businesses could get used to it.

If people begin to ask for higher wages in anticipation of price increases — negotiating cost-of-living adjustments of 6 or 7 percent, for example, instead of the typical 2 to 3 percent — companies could try to pass their swelling labor costs along to customers by raising prices. That could perpetuate rapid inflation, making it much trickier for the Fed to stamp out.

Given the threat, the central bank has been escalating its assault on inflation. The Fed first lifted interest rates from near zero in March, by a quarter point, to try to make money expensive to borrow and slow consumer demand. In May, it raised rates half a point, and last month, it increased them by 0.75 percentage points.

Many central bankers have been clear that they want to make another 0.75-point increase in July, and that they hope to raise rates into the neighborhood of 3.5 percent by the end of the year. They could achieve that by raising rates half a point in September and a quarter point in both November and December.

The question is whether the data will allow the Fed to slow down.

There are some hopeful signs. Retail prices could slow further as stores like Target try to sell off bloated inventories. And gas prices could keep dropping, said Patrick De Haan at GasBuddy, especially if there is any de-escalation in Ukraine.

That said, the gas outlook is clouded by the possibility that hurricane season could upend supply.

“It could reverse — I don’t want to say that the coast is clear just yet,” Mr. De Haan said.

Geopolitics pose another possible wild card: White House officials have fretted that a new round of European penalties aimed at curbing the flow of Russian oil by year-end could send global energy prices up again, and are trying to offset that risk.

And other upward pressures on inflation persist. Rents make up a big chunk of household budgets and are climbing quickly, for instance.

Economists at Goldman Sachs expect monthly readings of core C.P.I. — the gauge that catches underlying inflation pressure — “to remain strong in late summer” and to pick back up in the early fall before slowing toward the end of the year.