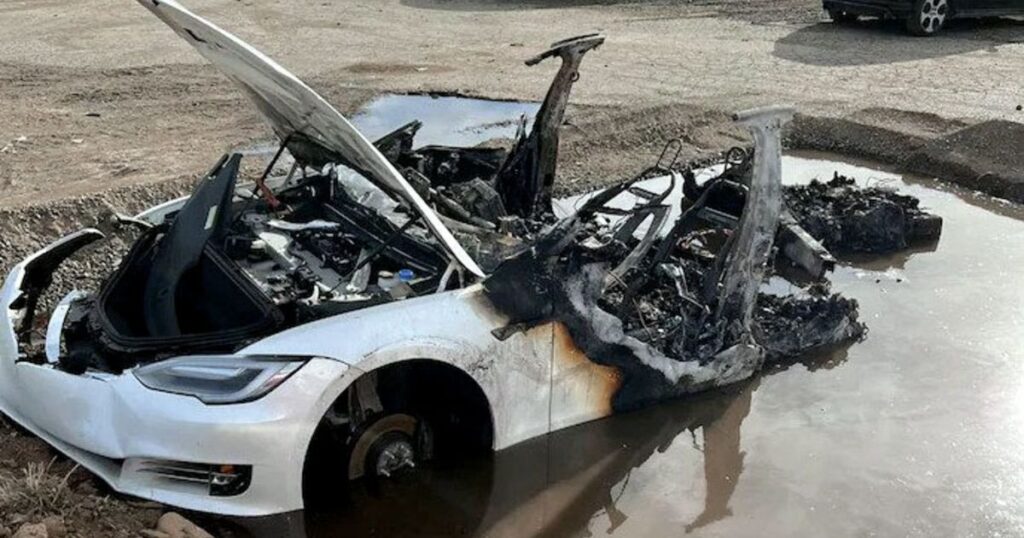 
A Tesla Model S that had been totaled in a crash suddenly ignited after sitting in a California junkyard for three weeks, and firefighters struggled to put out the 3,000-degree flames for more than an hour.

Firefighters thought they had extinguished the blaze multiple times, only for the battery pack to rekindle, even after junkyard workers helped turn the car on its side to allow for spraying the battery directly, The Washington Post reported last week. Finally, crews used a tractor to dig a water-filled pit and submerge the car.

A spokesman for the Sacramento Metropolitan Fire District said the effort required 4,500 gallons of water — about the same amount used to put out a typical building fire — and that officials didn’t know why the car “spontaneously caught fire.”

It was the first time the department had battled a burning Tesla, though such occurrences are expected to be more common as electric vehicle sales increase.

“This is a whole new animal for the fire service,” the spokesman, Capt. Parker Wilbourn, told the newspaper. “We’re still trying to wrap our heads around the EV fires.”

Tesla’s Model S guide for first responders specifically warns against submerging a vehicle in water to extinguish a battery fire. It says such a blaze often rekindles, can require 3,000 to 8,000 gallons of water “applied directly to the battery” and might take up to 24 hours to fully cool.