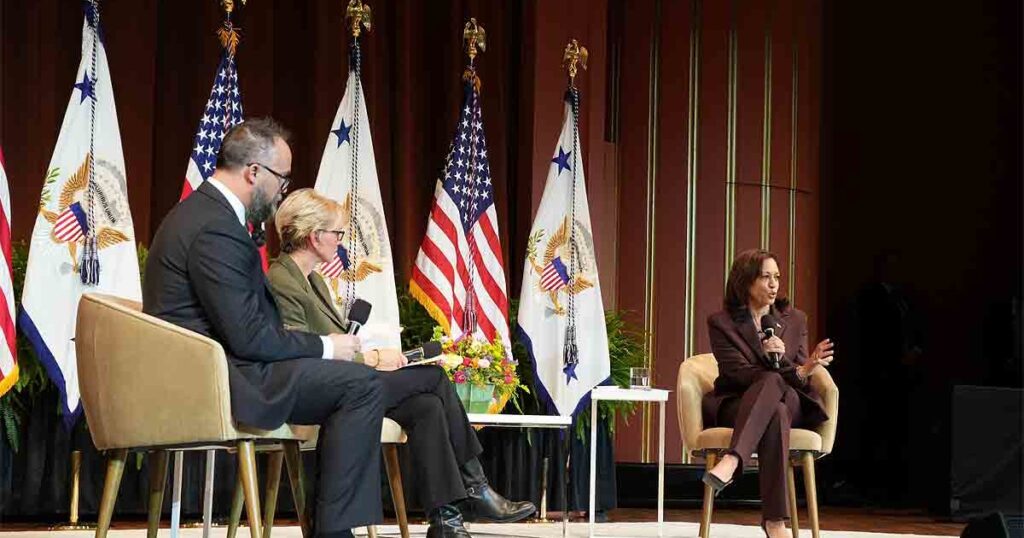 “The great thing about it is we are making [the school buses] right here,” Harris said. Alongside this production, she said, is “the creation of jobs.”

Electric school buses have become a notable part of the EV conversation as over 250 school districts across the nation have committed to test electric buses, and manufacturers have invested in the bolstering of production, such as the Lion Electric EV bus and truck production plant set to be built in Joliet, Ill.

The Inflation Reduction Act made waves in the automotive industry by offering tax credits up to $7,500 for EVs, with vehicle qualification requirements encouraging assembly and mineral sourcing in the U.S. or its free-trade partners. Granholm said these tax credits help lower costs for American families, something she believes will become an integral part of the transition to EVs.

More broadly, Granholm lauded recent increases in EV battery manufacturing and suppliers based in Michigan — representing billions in investments and thousands of new jobs, she also noted — pushing the state to lead the “clean energy revolution in transportation.”

These increases helped spur projects such as Gotion Inc.’s planned EV battery plant near Big Rapids, Mich., and a partnership between Lear Corp. and General Motors expected to create an $80 million EV parts plant, among others.

Sen. Debbie Stabenow, D-Mich., and Rep Debbie Dingell, D-Mich., also attended. Stabenow, who drove her  electric Chevy Volt to the event, promoted a policy emphasis of looking beyond innovation to production. She said the nation has a need for U.S.-made clean energy products and infrastructure, including EV charging stations and electric buses, “because it matters where it is made.”

Dingell said she believes Michigan is “at the heart” of the climate issue because of its involvement in the transportation industry, which is responsible for 30 percent of carbon emissions, she noted.

Looking forward to the future of EV production, though, Dingell emphasized that “the roots of the solutions are going to run deep from Michigan and the Midwest, the heartland of this country.”