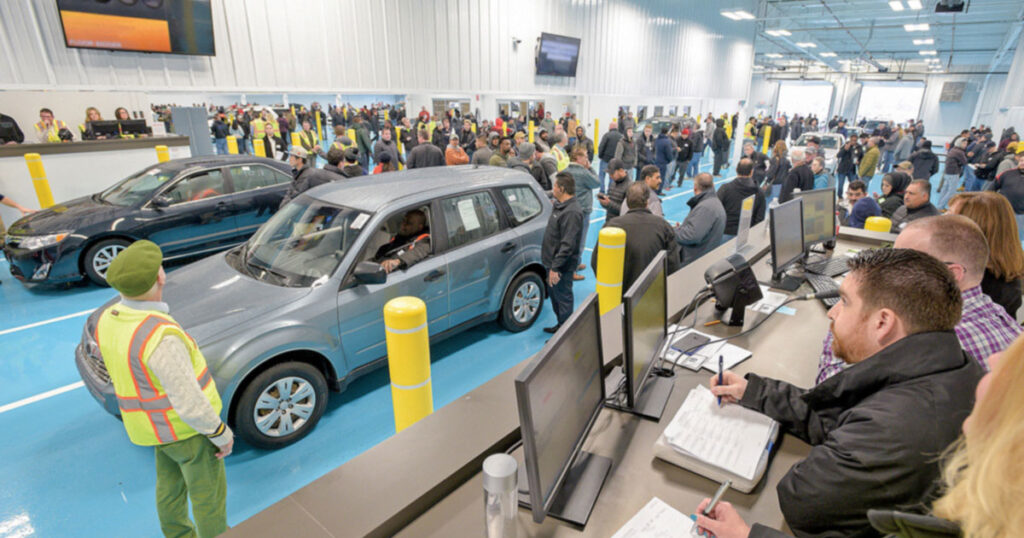 
KAR Global, the wholesale auctions provider, plans to move 300 positions in the U.S. and Canada to a global shared services organization, something it deemed a cost-savings maneuver.

“We have recently agreed to terms with two offshore firms to provide resources to support our back-office functions for KAR Global,” CFO Eric Loughmiller said during Wednesday’s earnings call. “This will impact over 300 positions in the U.S. and Canada.”

Loughmiller said affected employees have been notified and that severance packages will be paid out when the roles are migrated to the shared services organization.

“We expect to begin the migration of these roles over the next three quarters,” Loughmiller said.

The fact that KAR’s marketplaces are now digital and “generally not tied to a specific location” will allow the company to move a number of support functions offshore “without impacting the customer experience,” Loughmiller said.

He said the program is expected to generate $10 million (all figures in USD) in annual savings from the company’s current cost structure — something the company expects to see in 2023, when it moves to the offshore model. The impact of the initiative is not included in KAR’s realized savings in selling, general and administrative expenses for 2022, Loughmiller said.

The company also announced Loughmiller will retire at the end of 2022.

The wholesale auctions provider is conducting a national search for Loughmiller’s replacement and aims to fill the role before he retires, KAR CEO Peter Kelly told investors and analysts Wednesday on the company’s third-quarter earnings call.

KAR reported higher year-over-year revenue, more profits per each vehicle sold and a net profit from its continuing operations in the quarter that ended Sept. 30, though Kelly noted continued wariness about reduced conversion rates at auctions.

KAR reported a $500,000 net profit from continuing operations, which include its digital and hybrid wholesaling units such as BacklotCars, Openlane, Carwave and TradeRev. That’s compared with a $26.9 million net loss one year ago.

KAR’s total revenue in the quarter, not including ADESA U.S. operations, was $393 million, up 13 per cent from the same period a year ago.

Meanwhile, the company’s marketplace segment sold 314,000 total vehicles in the quarter, leaner than the 357,000 sold in the same period a year ago. Gross profit per vehicle sold rose to $320 in the third quarter, up 14 per cent. Auction fees per vehicle sold also grew to $283, up 12 per cent.

Conversion rates were lower in the third quarter than they were a year ago because used-vehicle values are in decline and buyers are less willing to pay the higher prices sought by many sellers, Kelly said.

The company saw a small bump in conversion rates in August, but for the most part, they’ve remained below 2021 rates, Kelly said.

Conversion rates vary by channel, he added. If a channel had a 60 per cent conversion rate in 2021, it’s down to roughly 50 per cent this year, he estimated.

Kelly said he expects used-vehicle values to continue declining through at least the fourth quarter. A softening in used-vehicle pricing could be a long-term positive for the business because it will allow more vehicles to flow back into the wholesale channel, he said.

“In the near term, however, a declining market is often characterized by lower conversion rates, and this can be a near-term headwind to the business,” Kelly added.

He told investors and analysts that an industrywide lack of wholesale used-vehicle supply remained evident in the third quarter.

The latest quarter was the second-lowest quarter for physical auction volumes since the pandemic began, he said.

As used-vehicle prices continue to decline and interest rates increase, that tends to increase risks in the finance business, Kelly said.

“While we do anticipate some level of increased risk as we enter 2023, we do not expect it to return to pre-COVID levels,” he said.

Q3 revenue from continuing operations: $393 million, up 13 per cent from the year-earlier period.

Q3 net income from continuing operations: Net profit of $500,000, compared with net loss of $26.9 million in the year-earlier period.