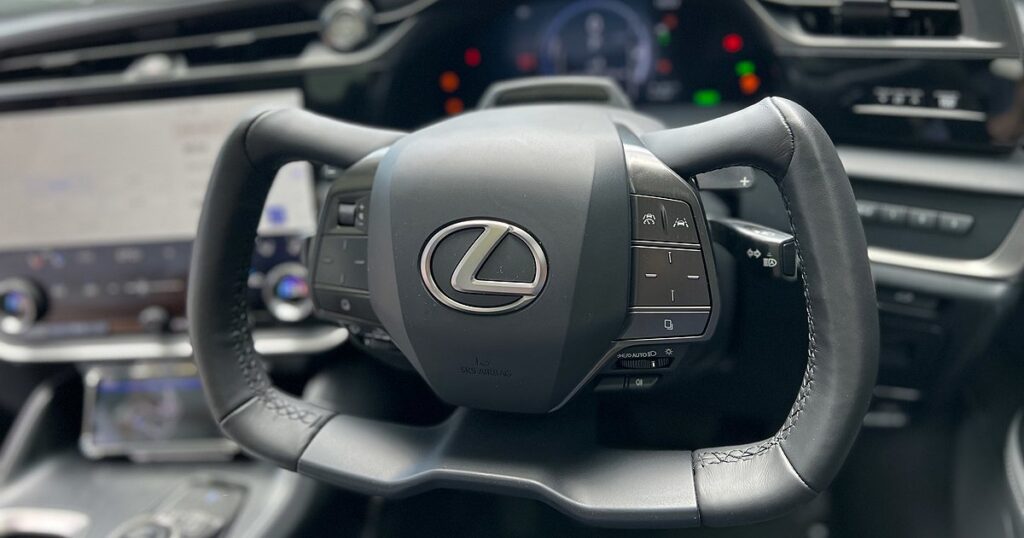 But the Japanese premium brand plans to advance the technology by combining jet-age looks with an advanced, ultraprecise steer-by-wire system in the upcoming RZ all-electric crossover.

The high-tech setup also one-ups the yoke steering system deployed by Tesla by resolving one of that system’s confounding issues. Tesla’s butterfly design, reminiscent of an airplane control or Formula One wheel, earned lackluster reviews when it debuted in the Model S and Model X because drivers must awkwardly spin it all the way around. But since the yoke has a flat top and bottom, there is no easy handhold.

Tesla also dropped the wheel’s turn indicator stem and moved that function to buttons on the face of the yoke. That meant that the buttons can confusingly end up on the opposite side of the steering control when the wheel is upside down.

Lexus tackled these issues by adopting a steer-by-wire setup with a variable steering ratio.

Its solution was to completely break the mechanical connection between the steering wheel touching the driver’s hand and the front wheels touching the road. Steering motion from the driver is sent electronically and controlled by software that adjusts input.

The setup allows the Lexus yoke to deliver a steering angle of 150 degrees between the right and left lock positions. The driver doesn’t have to rotate the yoke all the way or change grips while doing maneuvers such as U-turns or garage parking.

For that reason, Lexus calls it the One Motion Grip.

And because the Lexus yoke movement is only side to side, not a full 360 degrees, it can keep the familiar turn signal and wiper stems where people are used to them. Those controls turn with the yoke, but Lexus shortened their stems so they don’t bump into the driver’s legs.

Its rollout plans contrast with those for the bZ4X, the mass-market sibling nameplate from the Toyota brand. The bZ4X also options a yoke steer-by-wire setup, but Toyota is so far noncommittal about bringing the system to North America. It says only that its version will first be deployed in China.

Lexus won’t say exactly when it will deploy the yoke in any market.

Engineers say they are still fine-tuning the system. The RZ makes its global debut this autumn, and the yoke should be offered some time after the standard round wheel has been on the market.

Lexus said it expects that eventually about a quarter of RZ customers will opt for the yoke. Given the added cost of the system’s electronics, it will likely be offered in higher grades only.

PrevPreviousEight Measures That Reflect a Slowing U.S. Economy
NextTwitter Is Ready for a Potential Legal Battle With Elon MuskNext