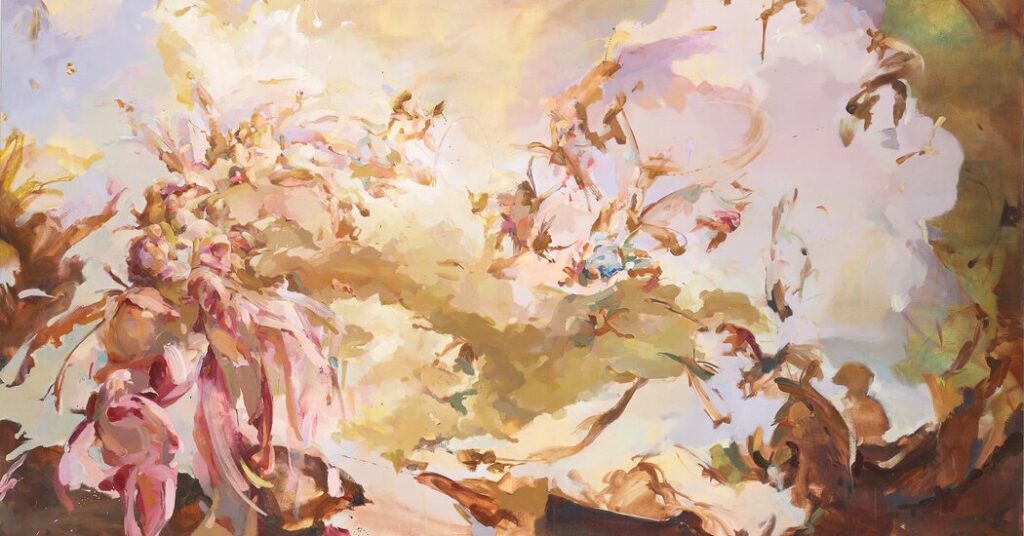 London Modern and Contemporary Auctions: A Market Minus the Froth


This week, while some of the world’s top tennis players were in action at Wimbledon, and war continued to rage in Ukraine, Christie’s, Sotheby’s and Phillips held their traditional summer week of marquee modern and contemporary art auctions in the British capital.

Headline auction prices quelled, for the moment, talk that London is losing ground to Paris as a hub for high-end art auctions: A sum of 30.1 million pounds with fees, or about $36.9 million, was paid twice in the same sale for two different Claude Monet paintings, and about $52.8 million purchased a Francis Bacon portrait of Lucian Freud. Last year, in the aftermath of Britain’s departure from the European Union, France’s share of global auction sales rose to 9 percent, while Britain’s shrank to 13 percent, according to the latest annual Art Basel & UBS Global Art Market Report.

“Collectors travel all around the world to see and buy great art,” said Offer Waterman, a London-based dealer in modern and contemporary British art. “It doesn’t matter where they are. The notion of hubs isn’t really relevant.”

In addition, in the pandemic era of virtual and hybrid livestream auctions, no one has to travel anywhere any more to view and buy art.

On Thursday at Phillips, for instance, at the last major auction of the contemporary art world’s summer season, just one of the 31 sold lots that raised a total of $21.3 million went to a buyer present in the room. All the other successful buyers were bidding either on telephones or online. The star lot of the evening, “Moi aussi je déborde,” a typical rococo-inspired canvas from 2017, in rose pink, by the young British market sensation Flora Yukhnovich sold to an online bidder in Canada for $2.1 million, some seven times the low estimate.

“Everybody’s scratching their heads about these artists,” the New York-based art adviser Kim Heirston said in an interview at Phillips, referring to the works by a select group of female painters in their 20s and 30s currently driving intense demand at contemporary art auctions.

Heirston noted that it took more than 60 years for works by the admired Color Field painter Helen Frankenthaler to break through the $1 million barrier at auction. “Now it takes a nanosecond,” Heirston said.

Seemingly wherever in the world a top-end auction of contemporary art is held, it has to be kick-started with pieces by the same must-have names. After a slew of record prices in New York in May, some of the heat seems to have been taken out of the auction market for paintings by emerging artists, at least here in London. Works by Anna Weyant (who is dating the megadealer Larry Gagosian), Shara Hughes and Christina Quarles all soared to seven-figure highs in New York, but here the bidding was more measured.

On Wednesday, Sotheby’s sold the pick of the paintings by Weyant, with $567,995 being given for the 2020 canvas, “Buffet.” In the same auction, Quarles’s multilayered 2017 painting, “We Woke in Mourning Jus Tha Same,” took $644,751. The previous day, Christie’s offered the most highly valued of the landscapes by the Brooklyn-based Hughes, “At Full Tilt,” from 2017, which reached $896,692. These were substantive enough prices, but bids weren’t being frantically screamed out as they were in May.

“London is always a little less frothy, and a little less good,” said Heirston, referring to the overall quality of the works on offer at these June auctions.

Both Christie’s and Sotheby’s have abandoned their traditional separate formats of Impressionist & modern and contemporary sales, offering instead marathon mash-ups of 20th- and 21st-century material. Christie’s started on Tuesday afternoon with an $11.9 million single-owner auction of 20 works by Marc Chagall from the artist’s estate, followed by a mixed-owner sale of 86 lots, which combined livestream auctions first in London, then Paris, and took more than three hours. The 61-lot first session raised $222 million, followed by a further $16.2 million from the 25 lots in Paris, underlining how London continues to be Europe’s locus for selling international trophy art.

The Christie’s sale was led by two desirable, museum-quality Monet series paintings. The 1904 canvas “Waterloo Bridge, effet de brune,” and “Nymphéas, temps gris” from 1907, both sold, much as estimated, to the same telephone bidder for $36.9 million each.

This level of blue-chip art now rarely creates a surprise in the salesroom, but the Christie’s sale also included the painting “Main Street Pool Hall,” circa 1976, by Ernie Barnes, whose similarly dated canvas “The Sugar Shack” created a sensation in New York in May when it sold for a record $15.3 million. That result had a knock-on effect in London when Barnes’s characterful depiction of a pool hall sold in the room to New York-based Citi Private Bank Art Advisory & Finance for $1.8 million, some 18 times the low estimate.

The following evening, Sotheby’s sold a 49-lot selection of modern and contemporary works, bolstered by 33 British artworks offered to celebrate Queen Elizabeth II’s Platinum Jubilee. The British entries included Francis Bacon’s little-known 1964 “Study for Portrait of Lucian Freud,” estimated to sell for about $50 million. Bacon was an uneven painter, and though this large gold-framed canvas had not been seen in public for more than 50 years, its ungainly composition attracted just one telephone bid above the guarantee and it was knocked down for $52.8 million. The bid was taken by Mark Poltimore, deputy chairman of Sotheby’s Europe, who often represents Russian clients.

Competition was similarly muted for Andy Warhol’s rare large-scale 1986 “Fright Wig” self-portrait, which sold to a single bid from its guarantor, as has increasingly become the case with high-value lots. This took $15.5 million in a Sotheby’s sale that raised $181.8 million from the evening.

In recent years, thanks to third-party guarantors ensuring minimum prices, unsold lots have virtually disappeared from marquee auctions. But here at Sotheby’s, David Hockney’s monumental Yorkshire landscape, “Woldgate Woods II, 16 & 17 May, 2006,” failed to sell against a hefty low estimate of $12 million. A Banksy valued at $5 million was also left unsold.

“I feel there was a turn,” said Christine Bourron, chief executive of Pi-eX, a London based firm that analyzes art auctions. Guarantors’ reluctance to finance high-value lots was a “warning sign,” Bourron said, adding, “Reality is starting to hit them; there’s a little less demand.”

The $2.8 billion that Sotheby’s, Christie’s and Phillips turned over in May was always going to be a hard act to follow, but the $453 million achieved here puts the relative strength of London’s position as an international auction center into international perspective. Back in 2015, in the days of separate “Imps & Mods” and “contemps” sales, Sotheby’s and Christie’s evening auctions in London raised $747 million, according to Pi-eX.

“London is suffering from post-Covid, Brexit and the international economic situation,” Bourron said.

Is this just a London problem? Or is there a wider international art market problem? We should find out at New York’s marquee auctions in the fall.

PrevPreviousWill There Be Enough Monkeypox Vaccine?
NextTikTok tells Republican senators how it plans to keep American data away from China.Next