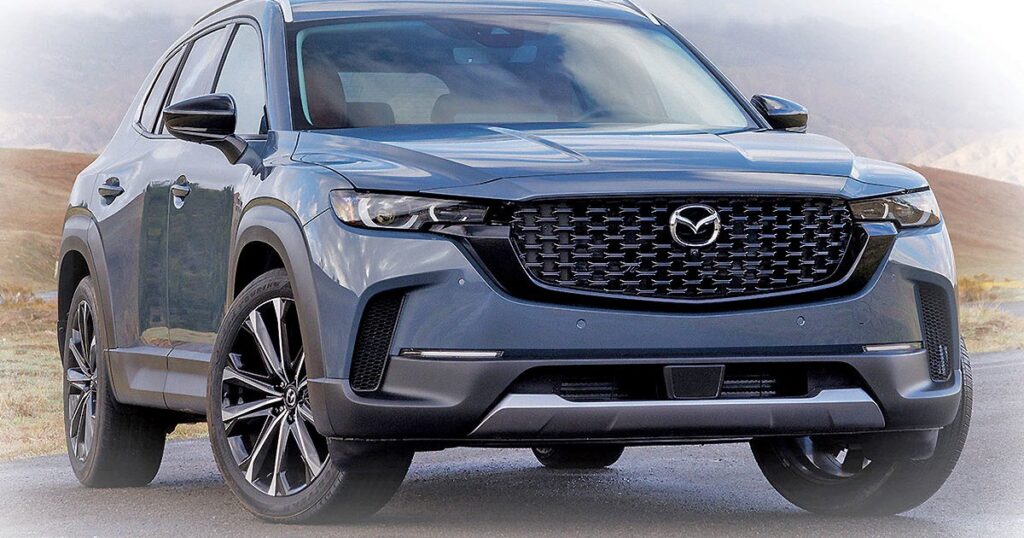 
If the MX moniker becomes Mazda’s electrified designation, then at some point the CX-30 and MX-30 could merge into one vehicle. Same goes for the potential MX-50 and its gasoline-powered CX-50 equivalent. The niche MX-5 roadster may also be destined for electrification.

What’s for sure is that Mazda will keep adding zeroes to its nameplates. The CX-90 will replace the CX-9, and it’s suspected that the CX-50 will eventually take the CX-5’s high-volume spot. The Mazda-Toyota plant in Alabama where it’s built has capacity of 150,000, which is just shy of CX-5 annual sales.

Mazda is on a unique path, but the automaker is good for the industry landscape, and consumers buy their cars. It lacks big volume, but the objective is building the right car and staying profitable. The vehicles are stylish, fun to drive and the interiors are well appointed. If Mazda stays its course and makes the leap to luxury, its unconventional approach to electrification could make sense in hindsight.

MX-50: It’s possible Mazda will debut an electric compact crossover in 2025 that would also offer CX-50 sizing and a version with a rotary engine range extender, like what is expected on the next iteration of the MX-30.

MX-30: One of the shortest-range EVs on the market, offering only 100 miles on a full charge, the 2022 MX-30 is sold out in California, the only state where it’s offered. So far it’s unclear whether the electric compact crossover will come back in its current form for the 2023 model year, but it’s unlikely the name will go away. A version with a rotary engine range extender is expected in the first half of 2023.

CX-9: After adding the Touring Plus model and making all-wheel drive standard on the CX-9 for 2022, Mazda shuffled the lineup again for 2023. The Touring trim is the entry point for the three-row crossover, and prices were raised across the board. While the CX-9 helped the brand enter the competitive midsize crossover segment when it debuted for 2007, and the current generation brought the Skyactiv-G 2.5 Turbo engine and the top Signature trim for the brand, Mazda will replace it in the lineup with the forthcoming CX-90. That means 2023 could be its final model year. Sales will likely continue into 2025.

CX-90: The all-new three-row CX-90 will arrive at the end of 2023, likely as a 2024 model. Though it’s unclear exactly when, it will replace the CX-9 in the lineup. It will be built on Mazda’s new rear-wheel-drive large-crossover platform and offer an inline six-cylinder engine and optional plug-in hybrid that uses a four-cylinder engine. The six-cylinder could have some form of mild hybrid that will boost efficiency a few mpgs. Mazda says the CX-90 will have expanded passenger and cargo space — the CX-9’s third row is one of the smallest in the class.

CX-70: The all-new CX-70 five-seater is expected to arrive late in 2023 as a 2024 model. Like the upcoming CX-90, it will use Mazda’s new rear-wheel-drive large crossover platform and offer an inline six-cylinder engine with possible mild hybrid and optional plug-in hybrid with a four-cylinder engine.

CX-50: The athletic CX-50 compact crossover debuted this year for 2023 and is built at the Mazda Toyota Manufacturing plant in Huntsville, Ala. It offers two 2.5-liter four-cylinder engines — one turbocharged – paired with a six-speed automatic transmission and standard all-wheel drive. Mazda increased pricing by $750 across the lineup in early August. The base 2.5 S now starts at $28,875.

There are 10 packages, including the more adventurous Meridian Edition Mazda announced last month. It’s equipped with the turbo engine, 18-inch wheels with all-terrain Falken tires, distinct exterior features and exclusive colors. It can tow up to 3,500 pounds like the other turbo models; the standard model hauls 2,000 pounds.

A hybrid powertrain could come in mid-2023, likely the Toyota system that could go into the Mazda3 and CX-30 with which it shares a platform. It will like undergo a midcycle freshening in 2026 and a redesign in 2029.

CX-5: Mazda said its top-selling CX-5 will sell alongside the CX-50, but it’s likely to share the same fate as the CX-3 subcompact crossover, which was discontinued soon after the CX-30 debuted. The 2023 CX-5 carries over and goes on sale this fall. It’s expected that Mazda will drop the CX-5 at the end of 2023 or early 2024.

CX-30: The subcompact crossover debuted for 2020 and is now Mazda’s second-best seller behind the CX-5. For 2022, Mazda made all-wheel drive standard and added the Carbon Edition with on-trend muted gray paint, red exterior and black wheels. The CX-30 will likely carry over for the 2023 model as a freshening is expected in late 2023 for the 2024 model. A redesign should come in 2026. A hybrid system from Toyota could be added to the CX-30 down the road.

Mazda3: Mazda’s compact car lineup, which includes a sedan or hatchback, has a new entry point for 2023. The base 2.0-liter engine was dropped in late 2022, leaving the 2.5-liter engine as the standard powertrain. Buy-in comes with a $1,500 price bump, but the 191-hp 2.5-liter engine is up 5 hp and fuel efficiency is improved. A freshen for the Mazda3 is expected in the second half of 2023 as is a redesign in late 2025 that could come with a new mild hybrid setup. It’s also possible that the Toyota hybrid system could go into the Mazda3 as it uses a variation of the front-wheel drive platform shared by the CX-30 and CX-50.