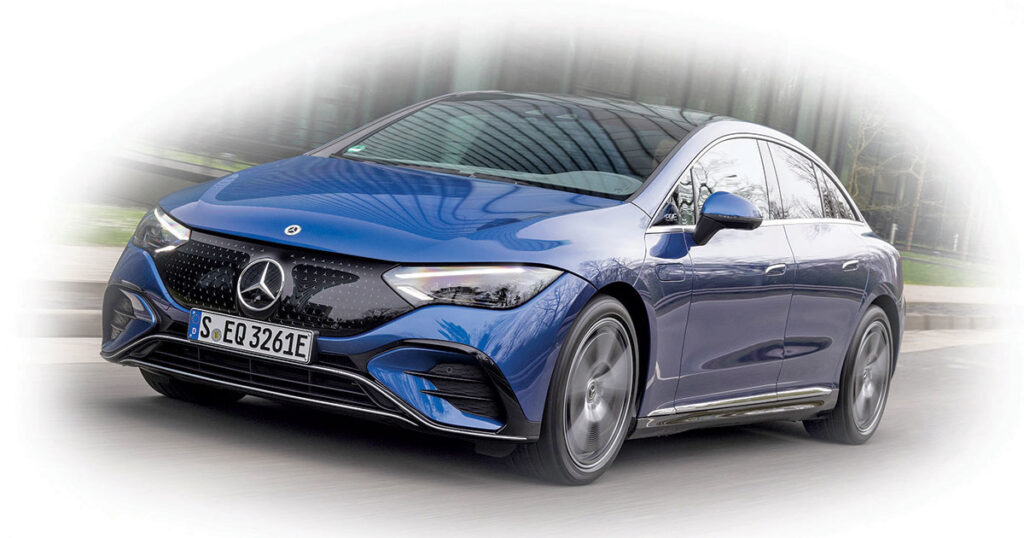 
EQS sedan: The large battery-powered sedan, which went on sale in fall 2021, is at the vanguard of a wave of EVs that Mercedes will deliver to the U.S. The 2022 EQS sedan is built on the EVA2 platform. It is available in rwd and awd and powered by a 107.8-kWh battery that delivers up to 350 miles of range, based on EPA estimates.

The AMG EQS arrived in late spring and is the first AMG production model based on the Mercedes EQ architecture. The performance sedan, newly developed and refined by AMG for all performance-related areas, features a boost function that provides up to 751 hp.

EQE sedan: The battery-electric midsize sedan is expected later in 2022 and will be based on the EVA2 platform. The EQE is powered by a 90.6-kWh battery that delivers a range of up to 410 miles, based on the Worldwide Harmonized Light Vehicle Test Procedure used in Europe.

Mercedes will also introduce a high-performance version of the electric sedan under the AMG brand, the AMG EQE, with up to 677 hp. It will have dual electric motors, awd and rear-wheel steering, and AMG performance and trim enhancements. Mercedes has not said when it would be available.

EQC sedan: A battery-powered version of the C-Class sedan is possible in 2026.

G-Class: The Mercedes-AMG G 63 4×4 Squared, a limited edition hardcore off-road variant of the iconic SUV, arrives this year. The G-Class should see an engine upgrade in 2024, and an all-electric version arrives around mid-decade.

Mercedes offered a hint of the battery-powered model when it revealed the Concept EQG last fall, referred to as near production. The concept retains the ladder frame chassis of the G-Class combustion engine model but packages batteries within the platform. Four electric motors are positioned near each wheel to allow individual control.

GLS: Mercedes’ top-of-the-line SUV receives a light freshening in third quarter of 2023 that will update the grille and introduce minor changes to the headlight and taillight design. A redesign should arrive in 2026.

The GLE should receive a minor face-lift next year, which could deliver a tweaked fascia and updated infotainment system. A redesign should come in 2026.

GLC: The new-generation compact crossover will launch in the U.S. in the first half of 2023, followed by the next-gen GLC coupe in the second half. An AMG version of the GLC coupe arrives in 2024.

The GLC shares much of its underpinnings with the latest C-Class sedan. The redesigned crossover will offer only four-cylinder combustion engines, dropping six- and eight-cylinder powerplants.

The GLC is powered by a 2.0-liter four-cylinder combined with a 48-volt mild-hybrid system that includes a starter-generator integrated into the transmission.

GLB: The GLB seven-seat small crossover was introduced in the U.S. in late 2019 and will receive a freshening in the fourth quarter of 2023.

GLA: The entry-level crossover’s long-term prospects are in question as Mercedes-Benz focuses on “fewer and more upscale portfolio positions” in the compact segment. But for now, expect a midcycle freshening in the second half of 2023.

The GLA could receive fresh headlight and taillight designs, a tweaked grille and different air intakes based on spy shots of the updated model undergoing testing in Germany.

Sprinter: The next generation of the gasoline-powered Sprinter won’t arrive until 2027.

Metris: The minivan received a face-lift for the 2021 model year that included design updates and new features in infotainment and driver-assistance systems. An all-electric replacement is expected around mid-decade.

Mercedes-AMG One: The production version of the Mercedes-AMG One hypercar packs a Formula One-inspired hybrid drivetrain and produces 1,049 hp from a 1.6-liter engine paired with four electric motors. The vehicle was first shown as the Project One concept at the 2017 Frankfurt auto show. Mercedes has reportedly sold all 275 units planned for production for $2.7 million each.

After years of delays, customers will finally receive their cars — except those in the U.S. Mercedes noted the AMG One will not be street legal stateside. “To preserve the unique character of its F1 powertrain, we have concluded that meeting U.S. road standards would significantly compromise its performance and its overall driving character,” the automaker said in a statement.

A redesigned two-door coupe version, powered by a 2.0-liter four-cylinder or 4.0-liter V-8, arrives in the first half of 2024. Electrified versions will also be introduced. Production of the AMG GT roadster ended in January.

S-Class: The S-Class should see a freshening in the first quarter of 2024. The Maybach S-Class was redesigned last summer.

Mercedes-AMG SL: The famed roadster received a redesign this year. Engineered by AMG, it is available exclusively as a Mercedes-AMG model. It is powered by an AMG-tuned 4.0-liter twin-turbo V-8 and rides on an all-new sports car platform known internally as the Modular Sports Architecture. The other big change comes in the seating configuration — now 2+2, a first for the SL.

E-Class: The midsize sedan will be redesigned in the third quarter of 2023, bringing an all-new design and the latest version of the MBUX infotainment system. Mercedes will drop the coupe and convertible body styles.

The four- and six-cylinder engine models will receive a 48-volt mild-hybrid system. In the future, Mercedes might add a plug-in hybrid variant to the lineup that could offer about 50 miles of battery-powered driving range.

CLS: Mercedes’ midsize four-door coupe is at the end of its third generation. The model will be dropped in late 2023.

C-Class: The workhorse of the Mercedes sedan lineup received a redesign this year. It ditched its six- and eight-cylinder engines, offering only a 2.0-liter inline four-cylinder with a fuel-saving integrated starter-generator and 48-volt mild-hybrid technology. Meanwhile, a redesigned AMG C-Class sedan boasting a new engine featuring Formula One technology arrives by year end.

CLE: The new nameplate replaces the C-Class and E-Class coupes. The base CLE arrives at U.S. dealerships in the first half of 2024 and should be powered by a 2.0-liter, four-cylinder mild-hybrid engine. An AMG version is also expected 2024.

The four-passenger CLE will be built on Mercedes-Benz’s MRA-2 platform. A convertible variant should also arrive in 2024.

CLA: The small sedan should see minor updates as part of a normal model year change in the second half of 2023.

A-Class: Mercedes’ short-lived entry-level vehicle became a casualty of waning consumer appetitive for small sedans and the brand’s new direction to go upmarket. Mercedes will jettison the A-Class in the U.S. after the 2022 model year.