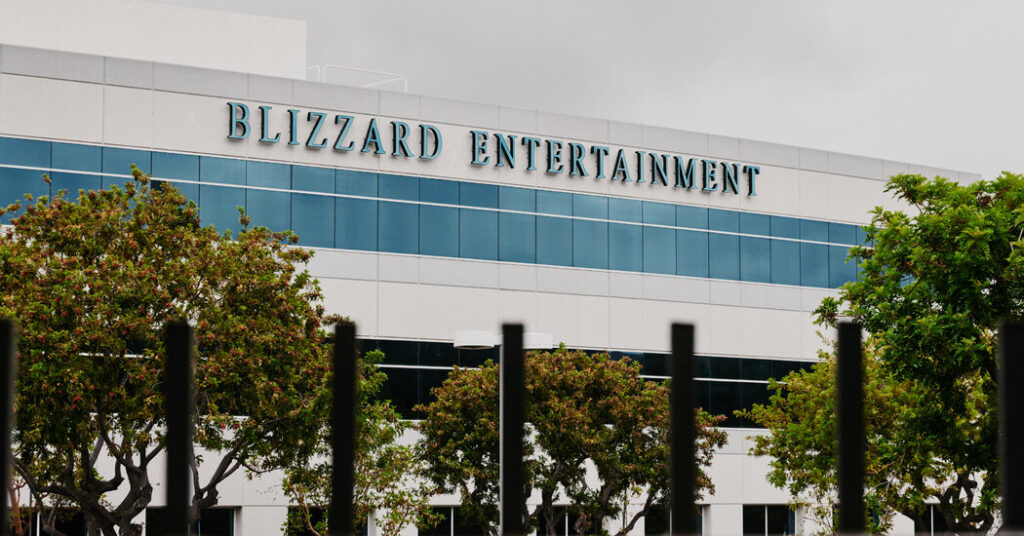 
Microsoft and the Communications Workers of America union announced an agreement on Monday that would make it easier for employees to unionize at the video game maker Activision Blizzard, which Microsoft is acquiring for $70 billion.

Under the deal, which appears to be the first of its kind in the technology industry, Microsoft agreed to remain neutral if any of Activision’s eligible U.S. employees want to unionize, and employees would no longer have to petition the National Labor Relations Board for an election. The company has almost 7,000 employees in the United States, most of whom will be eligible to unionize under the arrangement.

A group of nearly 30 employees at one of Activision’s studios voted to unionize through an N.L.R.B. election in May despite Activision’s opposition to holding the election. But completing such a process can be time consuming, with unions and employers sometimes spending months or even years litigating the results.

Through the agreement, workers will have access to an expedited process for unionizing, overseen by a neutral third party, in which they will indicate their support for a union either by signing cards or confidentially through an electronic platform.

“This process does gives us and Microsoft a way to do this quote unquote election without spending the time, the effort and the controversy that goes along with an N.L.R.B. election,” Chris Shelton, the president of the Communications Workers union, said in an interview.

The union said that the neutrality agreement resolved the antitrust concerns it had with the acquisition, and that it now supported the deal, which Microsoft has said will close by the end of June 2023.

Mr. Shelton and Brad Smith, Microsoft’s president, suggested that the deal could pave the way to wider unionization across the company and the industry. “This is a great opportunity for us to work with Chris and the C.W.A. and to learn and innovate,” Mr. Smith said in an interview. Microsoft said it was prepared to “build on” the deal in the future, but did not specifically comment on whether it planned to extend the terms to other gaming workers at the company.

Microsoft indicated that under the agreement, it would refrain from an aggressive anti-union campaign if other Activision employees sought to unionize. “In practical terms, it means that we’re not going to try to jump in and put a thumb on the scale,” Mr. Smith said in the interview. “We will respect the fact that our employees are capable of making decisions for themselves and they have a right to do that.”

Facing their own union campaigns, companies like Amazon and Starbucks have held frequent mandatory meetings with employees to argue that a union could leave them worse off.

The labor board has issued complaints against Amazon that include accusations of threatening workers with a loss of benefits if they unionize, and against Starbucks over accusations that it fired workers who sought to form a union and that it effectively promised benefits to workers if they chose not to unionize. Both companies have denied the accusations. In a recent case brought by the N.L.R.B. in Arizona, a federal judge denied a request for an injunction to reinstate pro-union workers that the labor board said Starbucks had forced out illegally.

The agreement between Microsoft and the union would also protect workers’ right to communicate among themselves and with union officials about a union campaign — something many employers seek to discourage — and stipulates that disagreements between the company and the union will be resolved through an “expedited arbitration process.” N.L.R.B. complaints can take months or years to resolve.

When Microsoft and Activision announced their blockbuster deal in January, the game maker was under stress as it faced accusations that senior executives had ignored sexual harassment and discrimination. Those concerns spurred organizing among Activision employees, including workers at its Raven Software studio in Wisconsin, which has developed games in popular franchises like Call of Duty.

After a group of roughly 30 quality assurance, or Q.A., workers announced that they were seeking to unionize, Activision sought to convince the federal labor board that their election should not go forward. The game workers accused Activision of union-busting tactics, like increasing the pay of non-Raven Q.A. workers and splitting Q.A. workers up by embedding them across the Raven studio.

Activision maintained that while some changes in this vein came after the union campaign went public, the broader shift in approach had already been underway — for example, its move to change the status of hundreds of temporary and contingent workers to permanent full-time employees in the fall.

In early March, the union signed a letter asking federal regulators to scrutinize the acquisition. “The potential takeover by Microsoft threatens to further undermine workers’ rights and suppress wages,” the letter said.

Microsoft has since tried to strike a conciliatory tone. It said it would not stop Activision from voluntarily recognizing the union prior to a formal election, which Activision did not do. After the Raven Q.A. workers voted in late May to form the first union at a major North American game publisher, Phil Spencer, the head of gaming at Microsoft, told employees that he would recognize the Raven union once the deal between the two companies closed, the gaming news site Kotaku reported, citing a video of an employee town hall.

Activision said on Friday that it was starting contract negotiations with the newly unionized Raven workers. “We decided to take this important step forward with our 27 represented employees and C.W.A. to explore their ideas and insights for how we might better serve our employees, players and other stakeholders,” Bobby Kotick, the company’s chief executive, said in a statement.

In a blog post this month that appeared to foreshadow the deal, Mr. Smith announced a set of principles to guide Microsoft’s response to labor organizing, an indication that it was taking a more open approach across the company’s businesses.

He wrote that he had observed Microsoft’s successful “collaborative experiences with works councils and unions” while working in Europe and said that in the United States the company would pursue “collaborative approaches that will make it simpler, rather than more difficult, for our employees to make informed decisions and to exercise their legal right to choose whether to form or join a union.”

In the interview, Mr. Smith called the neutrality agreement “our first opportunity to put those principles into practice.”

The Communications Workers of America, which represents employees at companies like AT&T Mobility and Verizon, has sought to organize tech industry workers in recent years. It has begun organizing retail workers at Apple Stores and helped workers at Google form a so-called minority union, which allows them to act together on workplace issues without having to win a union election.

About a dozen retail employees at Google Fiber stores in Kansas City, Mo., who are formally employed by a Google contractor, recently voted to join the union.