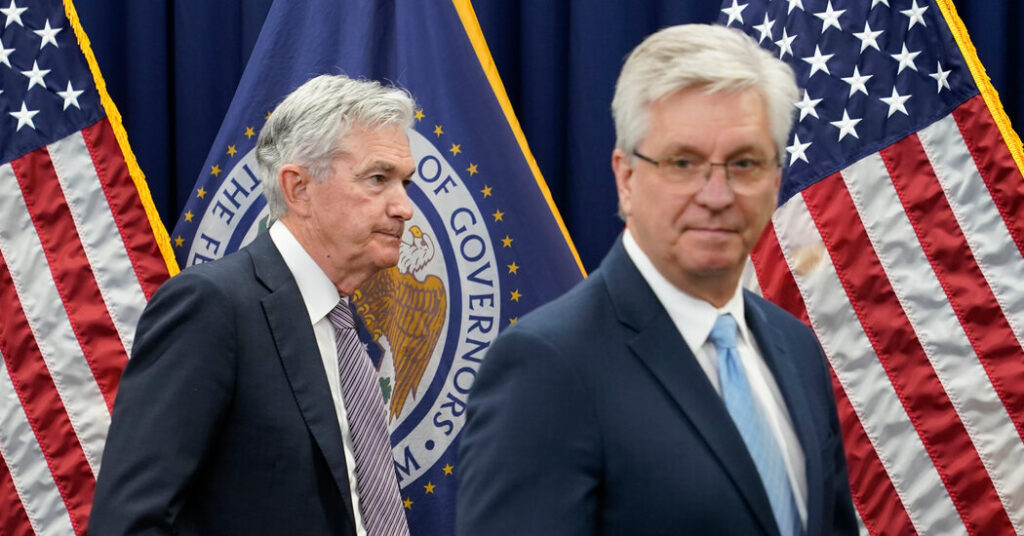 
Two Federal Reserve officials expressed support on Thursday for making a second large rate increase at the central bank’s upcoming meeting and argued that, while there are early signs that the economy is slowing somewhat, data on gross domestic product overstate the extent of any pullback.

Officials are debating how big of a follow-up move they should make at their July meeting, and a growing number have made it clear they would support a second big increase.

“I’m definitely in support of doing another 75-basis-point hike in July, probably 50 in September, and then after that we can debate whether to go back down to 25s — or if inflation just doesn’t seem to be coming down, we have to do more,” Christopher J. Waller, a Fed governor, said during an interview with the National Association for Business Economics on Thursday.

“I know there’s a lot of concern about overtightening possibly causing a recession, but I just want to remind people that inflation is a tax on economic activity,” Mr. Waller said. “Inflation on its own could put us in a really bad economic outcome down the road.”

James Bullard, president of the Federal Reserve Bank of St. Louis, also said on Thursday that a second large increase would make sense. Fed officials from Chicago, San Francisco and Cleveland had already signaled their potential support for a big move, but the fresh comments come at an important moment as global commodity prices sink, recession worries ramp up and the Fed prepares to meet on July 26-27.

“I personally think that some of the fears of a recession are kind of overblown,” Mr. Waller said, noting that models that forecast recession tend to put the odds below 50 percent. A Goldman Sachs estimate of the chance of a downturn over the coming year is 30 percent, much higher than normal but still far from implying that a recession is inescapable.

While key growth data are buckling — gross domestic product fell in the first quarter, and might fall again in the second — both Mr. Waller and Mr. Bullard expressed doubts about the figures, suggesting that they might be revised and do not properly represent the economic situation.

“It’s really odd to think of an economy where you’re at 2.5 million workers and output goes down,” Mr. Waller said. “I don’t know what kind of world does that.”

Mr. Bullard said he thought that gross domestic income — a measure of money earned on goods and services produced in the United States, and one that usually closely tracks gross domestic product — might offer a better snapshot of what is happening. The two data points have diverged, with income data looking stronger.

“Even though it’s kind of geeky, I think it’s a very salient issue right now,” Mr. Bullard told reporters on a call, after noting that “everyone is talking about two negative quarters of G.D.P., this is a recession.”