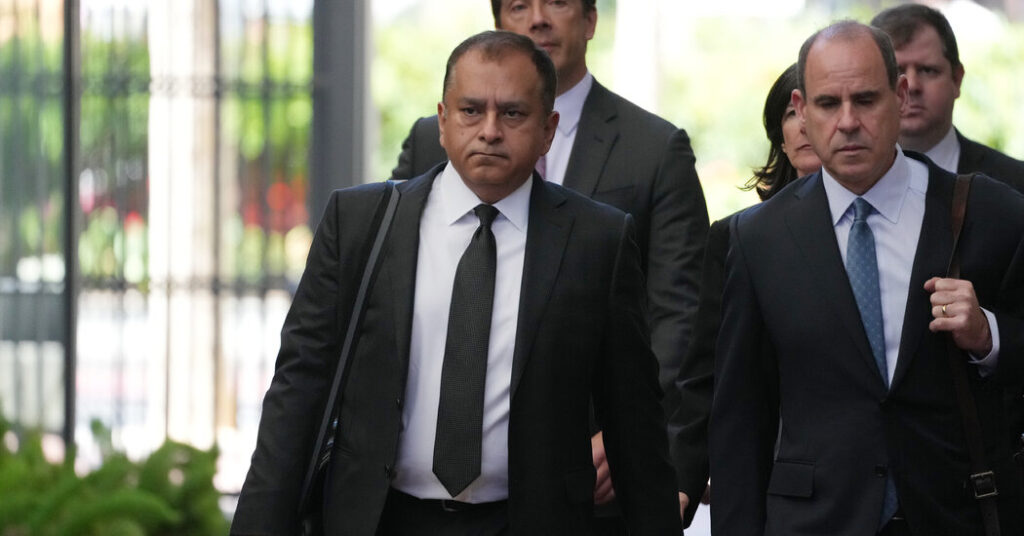 No. 2 Theranos Executive Found Guilty of 12 Counts of Fraud


SAN JOSE, Calif. — Ramesh Balwani, a former top executive at Theranos, was found guilty on Thursday of 12 counts of fraud, in a verdict that was more severe than that of his co-conspirator, Elizabeth Holmes, and solidifying the failed blood-testing start-up as the ultimate Silicon Valley cautionary tale.

Mr. Balwani and Ms. Holmes, who together pushed Theranos to soaring heights with a promise to revolutionize health care, are the most prominent tech executives to be charged with and convicted of fraud in a generation. A jury of five men and seven women took 32 hours to produce a verdict, convicting Mr. Balwani, known as Sunny, of all 10 counts of wire fraud and two counts of conspiracy to commit wire fraud.

Ms. Holmes was convicted in January on four counts of fraud and acquitted of four; three other charges were dismissed after the jury could not reach a consensus. She has appealed the verdict, and Mr. Balwani is expected to do the same.

Both of their cases hinged on whether they had exaggerated the abilities of Theranos’s blood-testing machines to appeal to investors and customers, when the products did not actually work.

Each count carries a maximum sentence of 20 years in prison. Mr. Balwani and Ms. Holmes are expected to be sentenced together in September.

As the guilty verdicts rolled in, Mr. Balwani, 57, who appeared in court in a black suit and blue medical mask, briefly shot a look at the jury before fixing his gaze straight ahead.

The dual guilty verdicts are a rare instance of the Silicon Valley hype machine’s leading to possible prison time. Since Theranos collapsed in 2018, the company has become a form of shorthand for business grifters, and the world has developed a voracious appetite for messy start-up rise-and-fall stories, such as WeWork’s disastrous first attempt to go public and the trickery of Ozy Media. But Theranos was the only one to result in criminal charges. Its consequences are likely to send a message to entrepreneurs who exaggerate in the name of innovation.

The verdict showed that jurors were swayed by the prosecutors’ evidence that Mr. Balwani knew about the problems in Theranos’s technology and business while deceiving investors and patients. Mr. Balwani had tried deflecting blame by arguing that Ms. Holmes — as the chief executive and founder of Theranos — was in charge, and by arguing that he had believed in Theranos’s mission and technology.

Mr. Balwani “put his heart and soul into Theranos,” said Jeffrey Coopersmith, a lawyer for Mr. Balwani, in his closing argument. “He worked tirelessly, year after year, to make the company a success.”

Evidence from the trial, including text messages, emails and testimony from 24 witnesses, showed that Mr. Balwani had been deeply involved in nearly every aspect of Theranos’s business and aware of its problems. He led its lab, created its financial projections, presided over personnel issues and attended many pitch meetings with investors.

“Mr. Balwani wants you to think he is a victim,” Jeffrey Schenk, an assistant U.S. attorney and a lead prosecutor in the case, said in his closing argument. “Mr. Balwani is not the victim — he’s the perpetrator of the fraud.”

The verdict arrived during a harsh awakening for the tech industry, as stock prices have tanked amid rising interest rates, ballooning inflation and economic uncertainty. Investors, burned by the sell-off, have stopped chasing high-risk, money-losing start-ups, prompting many Silicon Valley companies to cut staff and slow their aggressive plans for expansion. The humbling moment has many predicting the end of a decade-long boom for tech start-ups.

Mr. Balwani and Ms. Holmes capitalized on that era of go-go optimism for Theranos. The pair met when Ms. Holmes was 18, and they began dating in secret shortly after she created the start-up. Mr. Balwani joined the company in 2009 and invested in it.

As Theranos’s chief operating officer, he played a behind-the-scenes role in the company’s rise. He helped Ms. Holmes cultivate her Steve Jobs-like image, ran the lab and aided in fund-raising, pushing the company to a $9 billion valuation.

A 2015 exposé in The Wall Street Journal, which revealed Theranos had lied about its blood tests, sent the company reeling. Mr. Balwani soon left, and the start-up went under in 2018. That year, he and Ms. Holmes were charged with fraud.

Each defendant was frequently discussed in the other’s trial, but neither testified against the other. Ms. Holmes accused Mr. Balwani of emotional and sexual abuse, but those accusations were not permitted as evidence in his trial.

“The story of Theranos is a tragedy,” Mr. Schenk, the prosecutor, said in his closing argument.

PrevPreviousJobs Aplenty, but a Shortage of Care Keeps Many Women From Benefiting
NextMore Fed Officials Back a Big July Rate Move, but Downplay Recession FearsNext