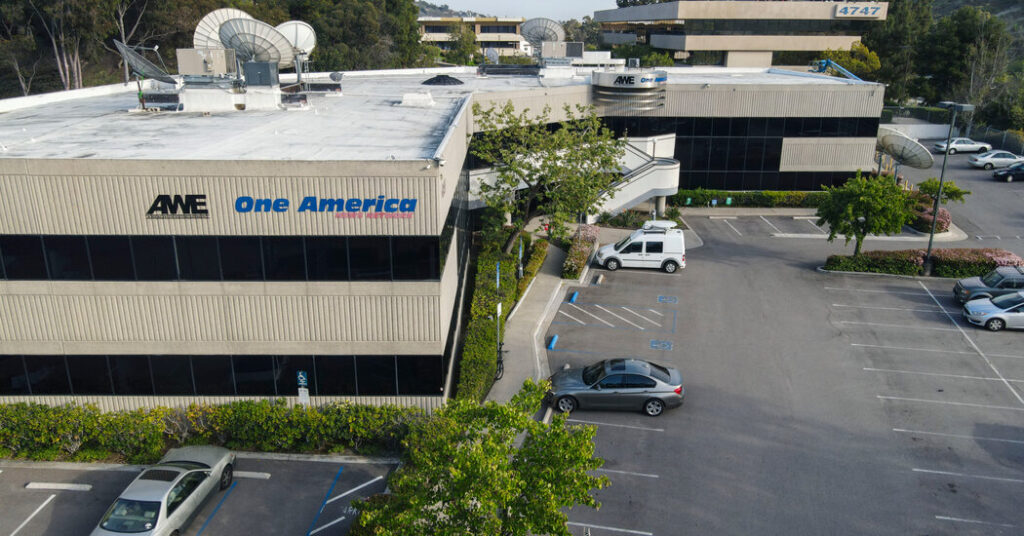 
The future of One America News, which established itself as a powerful voice in conservative media by promoting some of the most outlandish falsehoods about the 2020 election, is in serious doubt as major carriers drop it from their lineups and defamation lawsuits threaten to drain its finances.

By the end of this week, the cable network will have lost its presence in some 20 million homes this year. The most recent blow came from Verizon, which will stop carrying OAN on its Fios television service starting Saturday. That will starve the network of a major stream of revenue: the fees it collects from Verizon, which counts roughly 3.5 million cable subscribers. In April, OAN was dropped by AT&T’s DirecTV, which has about 15 million subscribers.

OAN’s remaining audience will be small. The network will soon be available only to a few hundred thousand people who subscribe to smaller cable providers, such as Frontier and GCI Liberty, said Scott Robson, a senior research analyst at S&P Global Market Intelligence. OAN also sells its programming directly to users through its OAN Live and KlowdTV streaming platforms, but those products most likely provide a fraction of the revenue generated by traditional TV providers.

“I really think this is the death blow for the network,” Mr. Robson said.

In its statement announcing the termination of its OAN deal, Verizon said only that it had been “unable to reach an agreement to continue carrying One America News,” and made no mention of the public pressure campaigns it faced from activist groups like Media Matters, which had been calling on cable providers to drop the network. A company spokeswoman declined to comment further on Tuesday.

DirecTV also did not elaborate on its reasons for dropping OAN, saying in January that the move was part of a “routine internal review.” On Tuesday, the company referred to the January statement.

While OAN doesn’t have the influence wielded by the much larger Fox News, the top-rated cable news network, the fees from its deals with Verizon and AT&T provided a substantial stream of income, about $36 million a year by some estimates. And once it is gone from millions of television sets, OAN will be in a weaker bargaining position with advertisers — fewer potential viewers most likely mean fewer companies willing to pay as much to promote their products on the network.

All this comes at a particularly bad time for OAN, which is based in San Diego. The company and the Herring family that backs it face defamation lawsuits over the network’s claims that the 2020 presidential election was stolen from Donald J. Trump.

That coverage featured wild stories about supposed plots to steal votes from Mr. Trump. The voting technology companies Smartmatic and Dominion are suing OAN over false claims that their machines enabled Mr. Trump’s enemies to switch votes cast for him to President Biden. One employee of Dominion, Eric Coomer, is also suing the network. Mr. Coomer received death threats after OAN named him in a report as an alleged collaborator of antifa, the far-left movement.

Two election workers from Georgia sued OAN for reporting that they were part of an illegal plot to add fraudulent votes to President Biden’s totals in the state, which he narrowly won. OAN settled that case in April.

The cases are among a series of defamation suits against conservative media outlets and Trump allies that are pending before judges across the country. Dominion and Smartmatic are also suing Newsmax, one of OAN’s competitors, and Fox News.

For OAN, the litigation has so far not gone well, as judges have rejected its attempts to have the cases dismissed. In one ruling, a judge concluded that OAN had acted “maliciously and consciously” in perpetuating falsehoods about Dominion, and that its chief White House correspondent, Chanel Rion, had failed to exercise even the most minimal journalistic scrutiny.

In her report, Ms. Rion cited a conservative podcaster and activist, Joe Oltmann, who claimed to have eavesdropped on an antifa conference call before the election, and reported that “antifa drenched engineers are hell bent on deleting half of America’s voice” and referred to Mr. Coomer.

Last year, Charles Herring, the president of OAN’s owner, Herring Networks, defended the coverage in remarks to The New York Times, saying that the network has a review process with multiple checks in place to ensure news coverage is up to company standards.

“Based on our investigations, voter irregularities clearly took place in the November 2020 election,” he said. “The real question is to what extent.”

Started in 2013 by Mr. Herring’s father, Robert Herring, a tech entrepreneur, OAN was for years a little-watched, right-wing cable network running stories about a Republican effort to impeach President Barack Obama and about American Muslims joining the Islamic State.

The conservative takeover of Washington in 2017 gave it new life. That year, DirecTV struck a deal to carry the channel and substantially expanded its potential viewership. Mr. Trump gushed about its flattering coverage of him, lavishing on it the kind of praise he typically reserved for Fox News, calling OAN “a great network.”

OAN became not only a reliable purveyor of fawning coverage of Mr. Trump but also a dogged pursuer of his political opponents. Its willingness to bend the truth and give voice to conspiracy theories on a variety of topics — vaccines, Covid-19, the identities of the rioters at the Capitol on Jan. 6, 2021 — went further than any of its competitors in the pro-Trump media sphere.

Mr. Trump rewarded the network’s loyalty. In the summer of 2020, dissatisfied with what he considered insufficiently positive coverage from Fox News, he urged his followers to instead watch OAN and Newsmax, deeming them “much better!” He did so again after the election, when OAN’s correspondents were more willing than many Fox journalists to continue lending credibility to allegations of voter fraud.

More so than some of its competitors, for months OAN clung to the notion that the election remained unresolved. At times, the network acted as if Mr. Biden were not the president. The channel did not broadcast live coverage of his inauguration. In a report in late March 2021, one of its correspondents claimed, “There’s still serious doubts about who’s actually president.”

Now OAN is trying to shore up its viewership. In recent days, an advertisement on its website offered new subscribers free access to its OAN Live service through Oct. 31.

Its anchors have cast their network’s dispute with Verizon as another attempt by a corporate media establishment to silence conservative voices.

One anchor, Dan Ball, recently implored viewers to call Verizon and demand that it continue service of OAN. “Call that number. You want to tell them, ‘Keep OAN. Keep OAN,’” he said. “Verizon is the next one trying to censor One America News.”