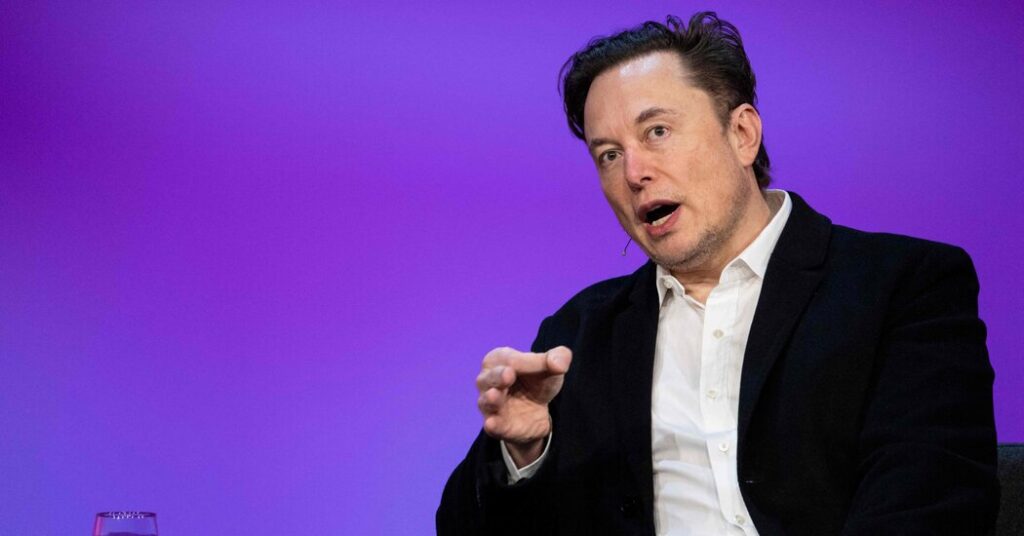 Today, Elon Musk, Twitter’s would-be (could-be?) owner, will field questions from “tweeps,” as Twitter employees are known. He will attend a virtual all-hands meeting as his $44 billion acquisition of the company, announced in April, continues to move ahead despite Musk’s hand-wringing about bots, which many analysts have interpreted as an effort to get out of the deal or lower its price tag.

The meeting has been a long time coming. Musk was supposed to take questions from employees after Twitter appointed him to its board in April, but that appearance was scrapped after he changed his mind and tried to buy the company instead. Doing a Q. and A. session now, after announcing a deal to buy Twitter, is a standard part of the M&A playbook, but this deal has been far from typical. Plummeting shares of technology stocks, including those of Tesla, a main source of Musk’s wealth, have coincided with what has appeared to be some hesitation on Musk’s part, and his erratic flurry of deal-related tweets has sent advisers, investors and employees scrambling.

Is this thing on? This month, Musk capped a string of complaints about Twitter’s bot count with an accusation that the company was stonewalling his efforts to get more information about how it calculates the number of fake or spam accounts, which he said could give him the right to abandon the deal. Days later, Twitter agreed to give Musk access to its “firehose,” a stream of millions of tweets. Despite the public back-and-forth, advisers continue to work toward completing a deal, which is expected to close by Oct. 24, assuming regulators approve it by then.

What are Twitter employees likely to ask about? Musk’s plans for policies on remote work, given his distaste for it and Twitter’s preference for it; his freewheeling approach to content moderation; whether he will move Twitter’s headquarters to Texas, as he did with Tesla; who Twitter’s next C.E.O. will be; and his thoughts on layoffs, given that he has indicated that he wants the company to shed hundreds of workers. They may also have questions about Insider’s report on the settlement of a sexual misconduct claim.

Will this session convince investors that Musk is serious? Twitter continues to trade well below Musk’s $54.20 takeover price, as investors doubt whether Musk will take the deal to the finish line. If he tries to wiggle out, there’s a $1 billion breakup fee, as well as a clause that gives Twitter the right to sue him to close, if his financing is intact. Surely Twitter’s lawyers, who are ready to take Musk to court if necessary, will be taking studious notes.

U.S. stock index futures slide more than 2 percent. Global markets tumbled this morning, a day after the Federal Reserve made its biggest rate increase since 1994, signaling that it was prepared to inflict economic pain to bring prices down. The rate increase could be followed by a similarly sized move next month, Jay Powell, the Fed chair, suggested.

Russia continues to find buyers for its oil despite sanctions. Oil production in Russia last month remained lower than it was before the war, the International Energy Agency said, but it was creeping higher, buoyed by purchases from India. The agency estimates that Russia earned $20 billion in May from oil sales, a $1.7 billion increase from April.

The F.D.A. recommends two coronavirus vaccines for babies, toddlers and preschoolers. The agency appears poised to authorize Moderna’s vaccine for children younger than 6 and Pfizer’s for those younger than 5 as soon as Friday. States have already ordered millions of doses, and White House officials have said shots could roll out as early as next week.

Abbott Laboratories pauses production at a Michigan baby formula plant. Thunderstorms caused flooding in part of the plant, another obstacle for Abbott as it seeks to ramp up production to alleviate a nationwide shortage of baby formula. Abbott said it had stopped making its EleCare specialty formula at the plant as it cleaned up.

A bipartisan group of 18 former top S.E.C. officials and legal luminaries are standing up for the agency’s power to make rules that require companies to disclose more information about their climate effects and risks. The group includes the former S.E.C. chairs Harvey Pitt, who was appointed by George W. Bush, and Mary Schapiro, who was appointed by Barack Obama, along with top legal experts like Leo Strine Jr., the former chief justice of Delaware’s Supreme Court, and Lucian Bebchuk, a corporate law professor at Harvard.

In a letter to the S.E.C. today, shared exclusively with DealBook, the group urges the agency to ignore claims that climate is a new issue and that it needs explicit permission from Congress to address it now, pointing to a history of S.E.C. rules going back “at least as far as the Nixon administration.”

Environmental disclosures were not always contentious. The S.E.C. received little pushback in 1971 when it first mandated environmental disclosures, the letter’s signatories write. In 2010, there were policy objections to climate-related guidance, but “sophisticated counsel did not contend that the S.E.C. lacked authority,” they write.

Nonetheless, the agency’s current proposal has generated significant pushback. In March, Representative Patrick McHenry of North Carolina, the top Republican on the House Financial Services Committee, and Jay Clayton, an S.E.C. chair under Donald Trump, called the S.E.C.’s proposal “overreach,” and said the power to mandate new rules on a major political and economic issue rests with Congress.

The Supreme Court is deciding a key environmental policy case. The court will soon issue a ruling in a case that challenges the Environmental Protection Agency’s power to regulate carbon emissions, which could have broad implications for agency powers and the Biden administration’s climate policy goals. If the court rules against the E.P.A., claims that the S.E.C. is now overreaching may gain traction.

The signatories disagree on policy. But they all reject claims that the agency lacks the power to act on climate, said Satyam Khanna, a Stanford fellow who was the S.E.C.’s senior climate policy adviser. “Democrats and Republicans alike know that the S.E.C.’s recent activity in this space is an evolution, not a revolution,” he said.

“Whenever I think about work, I stop thinking about what is happening in Odesa.”

— Inha Kushnir, an employee of the Lithuanian company Nordcurrent, and a member of Ukraine’s information technology diaspora. Many tech workers relocated to other parts of Europe after Russia’s invasion.

An obscure religious group and a suit against Google

A former video producer at Google claims he was fired after he complained that a religious organization called the Fellowship of Friends had gained a foothold inside a Google business unit, The Times’s Cade Metz and Daisuke Wakabayashi write. Even in the context of Google’s freewheeling office culture, the story is an unusual one.

As many as 12 members of the group and close relatives worked for the Google Developer Studio, which produces videos showcasing the company’s technologies, according to a lawsuit filed by the producer, Kevin Lloyd. Many other Fellowship members staffed company events, working registration desks, taking photographs, playing music, providing massages and serving wine.

Lloyd says he lost his job because he complained about the organization’s influence. His lawsuit, filed in August, accuses Google and Advanced Systems Group, or ASG, the company that sent Lloyd to Google as a contractor, of violating a California law that protects workers against discrimination. ASG denied the accusations, and Google said it would look into them.

The Fellowship believes a higher consciousness can be achieved by embracing the fine arts. Founded in 1970 by a former schoolteacher, the group describes itself as an organization “available to anyone interested in pursuing the spiritual work of awakening.” It claims 1,500 members, who are typically required to give 10 percent of their monthly earnings to the organization.

The Google unit is run by a longtime member of the Fellowship, Peter Lubbers. The team’s leadership abused the hiring system that brought workers in as contractors, said Erik Johansen, a senior video producer who has worked for the unit since 2015 through ASG. “They were able to further their own aims very rapidly because they could hire people with far less scrutiny and a far less rigorous on-boarding process than if these people were brought on as full-time employees,” Johansen said.

PrevPreviousBank of England raises rates for a fifth time, to 1.25 percent.
NextCanadians not ready for autonomous vehicles, study findsNext