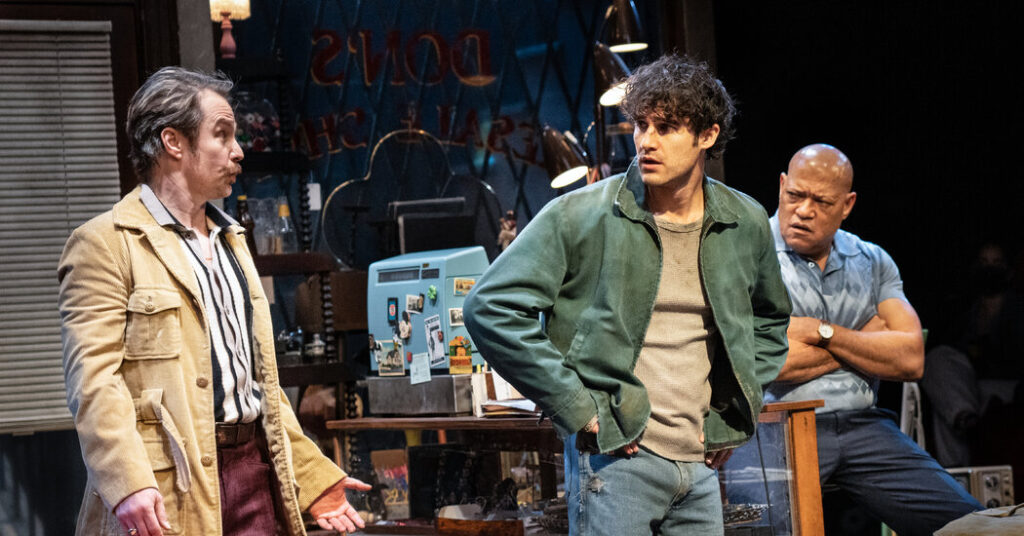 On Broadway, One Show Decides to Keep Masks. No, It’s Not ‘Phantom.’


Three days after the Broadway League announced that all 41 theaters would make masks optional starting July 1, one of those theaters has decided to stick with mandatory face coverings.

The producers of a starry revival of “American Buffalo,” which is a 1975 drama by David Mamet about three schemers in a junk shop, announced Friday that they would continue to require masks through the scheduled end of the show’s run at Circle in the Square Theater on July 10.

That’s only 10 days beyond when Broadway plans to drop its industrywide masking requirement, and it’s just one show, but it suggests that the unanimity among producers and theater owners may not be rock solid.

There are several factors that make the “American Buffalo” situation unusual.

The play, starring Sam Rockwell, Laurence Fishburne and Darren Criss, is being staged at Broadway’s only theater-in-the-round (it’s actually almost-in-the-round, because the seating doesn’t entirely encircle the stage), which means there are more patrons seated within spitting distance of actors than at other theaters.

Also, Circle in the Square, with 751 seats as it is currently configured, is the only remaining Broadway theater that is not operated by a large company or a nonprofit organization, so its decisions are not tied to those of a bigger entity.

Rockwell expressed concerns about the end of the masking policy in an interview this week with the New York Times columnist Ginia Bellafante.

The show announced the change in policy in a news release, saying that it was “due to the close proximity of the audience to the actors as a result of the intimate size of the theater and the staging in the round.” The production and theater owner did not immediately respond to requests for further comment.

It is not clear whether the decision will affect other Broadway shows. The vast majority take place in theaters operated by a handful of big landlords who endorsed the mask-optional decision. Broadway’s four nonprofit theater operators, who have been more Covid-cautious, do not have any shows this summer. And summer fare on Broadway is dominated by big musicals, where the audience tends to skew toward tourists, many of whom come from places where masks are long gone; older New York playgoers are scarcer at this time of year (and the volume of shows is lower, too: there are only 27 shows now running on Broadway).

After “American Buffalo” closes next month, Circle in the Square is scheduled to be vacant until October, when a new musical called “KPOP” begins previews.

Actors’ Equity, the union representing performers and stage managers, has declined to comment on the audience safety protocols, but this week sent an email to its members, previously reported by Deadline, saying, “This decision was made unilaterally, without input from your union or any other, and the unions were only given advance notice a couple of hours before the announcement.”

Although the decision was announced by the Broadway League, it was made by theater owners and operators, and they plan to reconsider the protocols monthly.