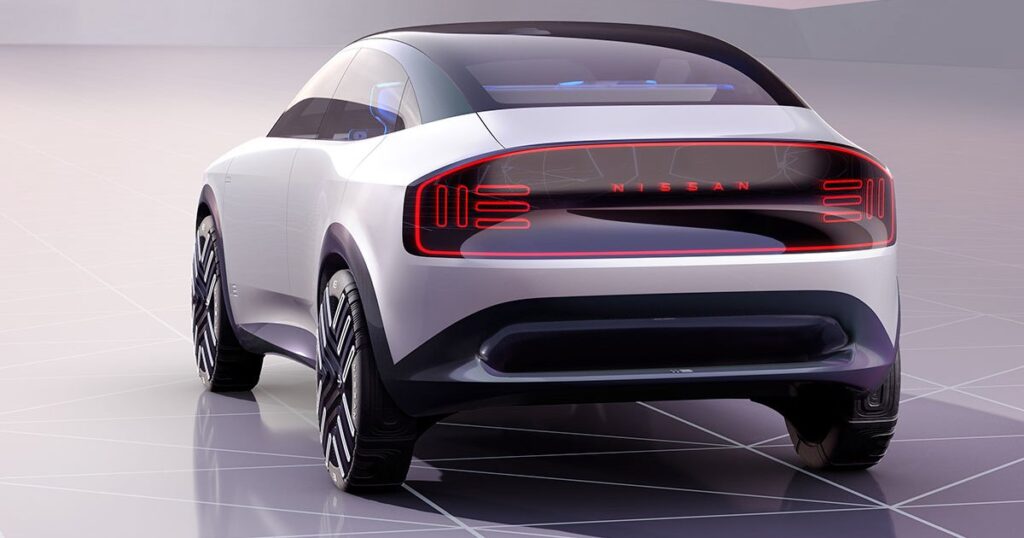 
This fall, the automaker — an EV pioneer when it launched the Leaf more than a decade ago — will introduce its second all-electric model, the Ariya crossover.

“The attention to quality and the innovations we’ve brought — the central console, how the human-to-machine interface works, how the switches are built into the panels — is a step above what has been available in this segment so far,” Papin told Automotive News.

Looking beyond, Nissan should bring an electric sedan in 2025. The automaker will invest $500 million in its Canton, Miss., factory to build that vehicle and other EVs.

Further out, Nissan is said to be considering an electric pickup for the U.S. In November, Nissan showed off a battery-powered pickup concept.

Meanwhile, change is coming to some of Nissan’s iconic nameplates.

The Leaf — which pioneered the EV segment when it launched in the U.S. in late 2010 — will be replaced with a new coupe-like electric crossover by mid-decade.

The flagship Maxima sedan gets ditched next year. And the Titan — Nissan’s attempt to take a sustainable share of the full-size pickup segment — will be discontinued by mid-decade.

Nissan will also speed up the product cadence — bringing updates to market faster.

“We plan to keep products fresh in their segments and across the lineup, which means you need to bring a product evolution into the marketplace more regularly,” Papin said. “Frontier was a 14-year-old truck when we replaced it. We don’t plan on doing these types of life cycles again.”

Electric pickup: Rumors of a battery-powered, lightweight pickup for the U.S. surfaced last summer. The new model would slot below Nissan’s Frontier midsize pickup and arrive later in the decade.

In November, Nissan teased an outdoorsy activity vehicle concept, called Surf-Out, with an open cabin-back for easy access to the pickup bed. The electric truck would use an advanced system of Nissan’s e-4ORCE all-wheel-drive electric drivetrain.

Ariya: The new Rogue-size Ariya electric crossover was initially expected to launch in mid-2021 but got delayed by COVID-related chip shortages. U.S. sales will instead begin in the fall.

The dual-motor EV is available in front-wheel or all-wheel drive and delivers up to 300 miles of driving range. New technologies include Nissan’s next-generation automated driving system.

The Ariya features prominent front fenders, rear fender flares, super-slim LED headlights and a steeply raked C-pillar. It ditches the conventional grille for what Nissan describes as a “shield,” which, in driving mode, is illuminated to reveal Nissan’s V-motion design signature.

The Leaf was marketed as an affordable, mass-market electric car when it launched in the U.S. in late 2010. But the hatchback has been outpaced in the market by a wave of more stylish and capable offerings.

U.S. production of the Leaf — currently in its second generation — is expected to end mid-decade.

PrevPreviousWill the Biggest Publisher in the United States Get Even Bigger?
NextHonda will focus on hybrids, then EVsNext