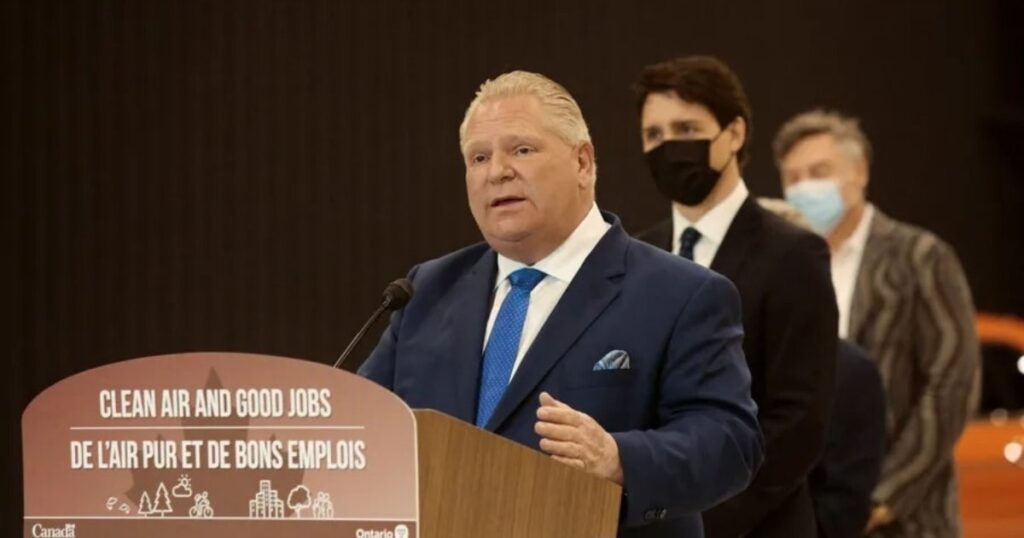 Conservative Premier Doug Ford has a majority government and can pass practically any legislation his party chooses. But it won’t be offering electric-vehicle rebates any time soon.

However, it plans to make hay with the U.S. EV tax rebate, signed into law by President Joe Biden on Aug. 12. It was feared that the Inflation Reduction Act of 2022 would exclude Canadamade electric vehicles from a US $7,500 tax credit. But U.S. lawmakers eventually decided to include all vehicles made in North America in the plan.

That pleased everyone from automakers to unions to politicians.

Ontario Economic Development Minister Vic Fedeli praised the decision, noting it was a chance to build more EVs in Canada and ship them south. But he recently told The Canadian Press that his government has no plans to reinstate an EV rebate of its own, something it scrapped in 2018 when it first came to power under Ford.

“Those rebates that were in place before, if you bought an electric vehicle in Canada and you were looking for a rebate, it’s on a foreign-made car,” he told the news agency.

Oh, the hypocrisy. That’s precisely what our American cousins are being enticed to do; buy foreign-made (i.e. Canada) electric vehicles.

Apparently, we’re all in this together. Unless we aren’t.

I’m not sure who exactly the Conservatives are pandering to when it comes to their staunch refusal to reinstate a rebate.

Fedeli said the government “decided to put our money on the supply side, backing the workers.” Newsflash: Ontario isn’t just made up of autoworkers. There are other “workers” who would like to sell electric vehicles. And even more who would like to buy them.

It’s not like incentives are uncommon or that they don’t work. Every jurisdiction that has them sees higher EV uptake. And no, EVs are not just for “millionaires,” as the premier once claimed. Entire brands are going electric. So, it’s time for Ontario to join two of the country’s biggest markets — Quebec and British Columbia — and offer incentives. And don’t be frugal.

Some people in the industry want the incentives increased, despite B.C. upping the maximum amount to $4,000 from $3,000. But the province is now tying that to income, which can actually reduce the total amount available to some.

“Problem is that the average incentive for most EV intenders will be lower at a time when EV prices are increasing,” said David Adams, head of the Global Automakers of Canada, which represents overseas brands such as Toyota and Honda. “Not a good recipe for increasing adoption B.C.”

But an even worse recipe is none at all.