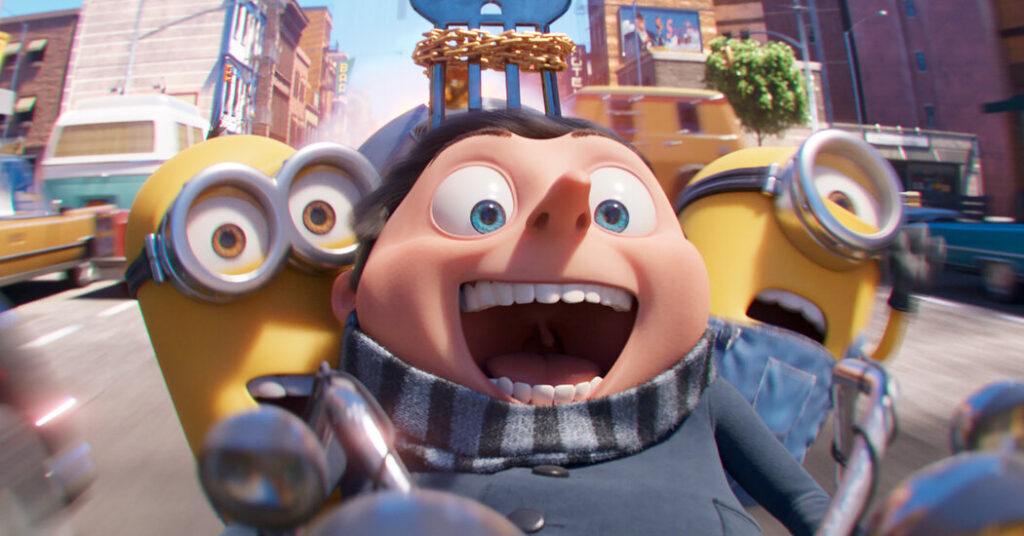 Pandemic-battered movie theaters are feeling good after a strong June.


For two years, the film industry lived in genuine fear about the future of moviegoing, with no one able to say for sure whether cinemas would recover from the coronavirus pandemic. Sitting in the dark in a theater to watch moving images — a 117-year-old American pastime that was already in long, slow decline — may well have encountered its extinction-of-the-dinosaurs moment.

But box office analysts say there is now enough evidence for a clear assessment: Moviegoing in the United States and Canada is out of intensive care and headed toward something that even resembles health. “Every genre has re-established itself, with the exception of big animation,” said David A. Gross, who runs Franchise Entertainment Research, a film consultancy.

This weekend could add animation to the list. “Minions: The Rise of Gru” (Universal-Illumination), the fifth installment in the “Despicable Me” series, could take in $80 million or more at North American theaters between Friday and the end of the day on Monday, according to analyst surveys that track audience interest. That would be a “spectacular” showing for an aging franchise, Mr. Gross said.

Ticket sales for June in the United States and Canada will total roughly $990 million, a decline of about 10 percent from June 2019, according to Comscore, which compiles moviegoing data. “This is a fantastic result — the best month at the box office since the pandemic began by far,” said Paul Dergarabedian, a senior Comscore analyst.

Moviegoing in May was down 42 percent from May 2019, for instance. April was down 25 percent.

June benefited from a mix of movies. “Top Gun: Maverick” (Paramount) collected more than $535 million in North America since arriving on May 27, while “Jurassic World Dominion” (Universal) has sold about $315 million in tickets over the last three weeks. The animated “Lightyear” (Disney-Pixar) has chipped in about $100 million since its June 17 release, while “Elvis” (Warner Bros.) has taken in nearly $50 million since arriving a week ago, a very sturdy total for a musical biopic. “The Black Phone” (Universal), a low-budget horror movie, has generated about $35 million over the same time frame.

And the zany indie “Everything Everywhere All at Once” (A24) continues to chug away at art houses, collecting an impressive $66.4 million since late March.

After years of delaying releases and rerouting films to streaming services, studios are stocking the multiplex shelves again. This month, 11 wide releases are planned, one more than in July 2019, according to Mr. Gross. The lineup includes “Thor: Love and Thunder,” “Where the Crawdads Sing,” “Paws of Fury: The Legend of Hank” and Jordan Peele’s “Nope.”

“We have consistently stated that a steady stream of diverse, compelling new film content, along with improving moviegoer sentiment, would be driving forces behind the re-ignition of theatrical exhibition,” Sean Gamble, the chief executive of Cinemark, one of North America’s largest multiplex operators, said in an email. June was Cinemark’s highest-grossing month since the start of the pandemic.

Analysts attribute some of the June surge to movie quality (good reviews), pent-up consumer demand and the power of in-theater marketing (trailers that play one weekend increase attendance the next). There is also growing confidence about theaters as a virus-safe activity; about 85 percent of prepandemic ticket buyers — those attending at least four movies a year — feel safe going to theaters, according to polling by the National Research Group, a film industry consultancy. In January, about 65 percent felt safe. NRG data shows that consumers in general view movie theaters as safer than gyms, bars and restaurants.

Mr. Gross noted that his positive domestic outlook comes with one big note of caution: The international box office still seems to be lagging in a recovery, and not just because studios have stopped releasing movies in Russia.

“There’s a malaise,” he said. For instance, “Jurassic World Dominion” is expected to generate about $125 million in China, but its 2018 franchise predecessor, “Jurassic World: Fallen Kingdom,” collected $258 million in the country. Pixar movies usually do quite well overseas, but “Lightyear” has been an exception, Mr. Gross said. (“Lightyear” was banned in 14 small box office markets in the Middle East and Southeast Asia because it briefly depicts a same-sex relationship.)

“Top Gun: Maverick” is a smash hit everywhere, but some analysts expected even more in some foreign markets.