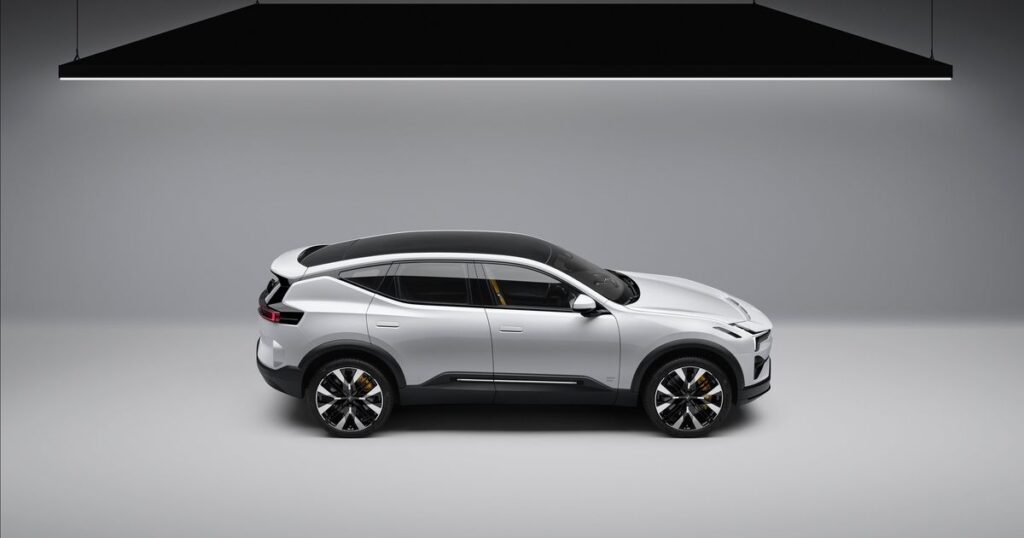 
Swedish automaker Polestar Cars will introduce what it says will be its highest-volume vehicle yet in October.

The Volvo affiliate will bring the Polestar 3, a Porsche Cayenne-sized crossover, to North America in the first quarter of 2023.

Ahead of the launch, Polestar released a new film and the first undisguised image of the midsize crossover. Unlike the current Volvo-inspired Polestar 2 sedan, the Polestar 3 features new design elements that include a sloping silhouette and headlight and rear light styling that are distinct from other Polestar models.

“With this car, we bring the ‘sport’ back to the SUV, staying true to our performance roots,” Polestar CEO Thomas Ingenlath said.

Polestar plans to equip the new model with hardware and electronics that would enable autonomous highway driving by mid-decade, including lidar sensors from Luminar Technologies and computer electronics components from Nvidia Corp. The sensors are packed into the so-called Smart Zone — a transparent panel on the Polestar 3’s front grille.

The Polestar 3 is built on a new all-electric platform developed by Volvo for its next-generation vehicles, designed with dual motors and an expected range of 600 kilometres, based on the European WLTP standards. Once that technology is approved, the new platform will also offer eyes-off, hands-off autonomous driving capability.

The Polestar 3 is key for the young brand’s ambitions to grow its global sales ten-fold to about 290,000 units by 2025. Polestar plans to launch a new car every year for the next three years, starting with Polestar 3, and aiming to increase its presence to at least 30 global markets by the end of 2023.

“This is a major milestone for our company, one that boosts our growth trajectory and takes us into our next phase,” Ingenlath said.

Dealers will learn more about Polestar 3 configurations and pricing this summer.

Polestar 3 will launch in a more competitive market than the Polestar 2 did. Mercedes-Benz, BMW and Porsche are introducing battery-powered crossovers in the next few years.