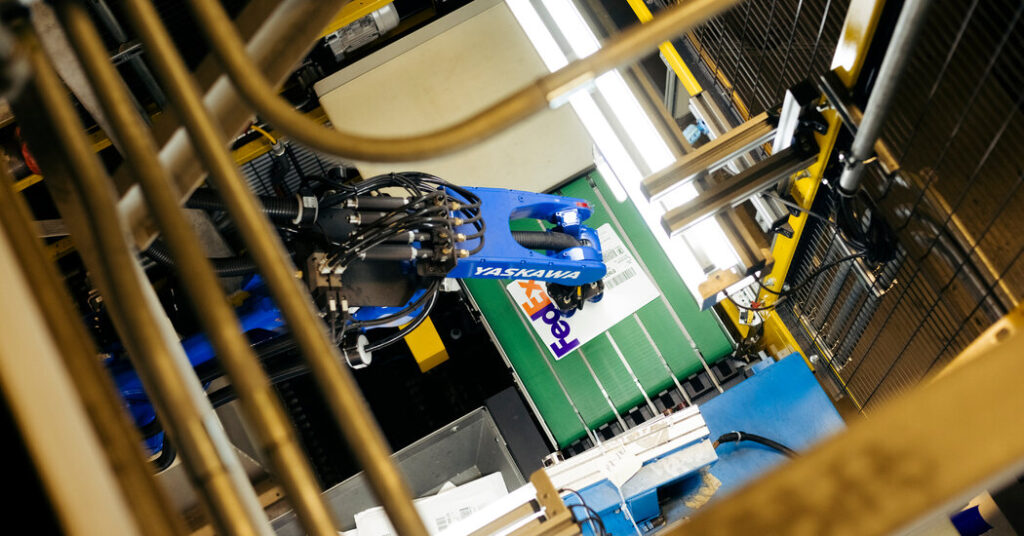 
When Digit spends an afternoon unloading boxes from a tractor-trailer in 100-plus-degree heat, co-workers never hear a complaint. Digit, a blue-and-white humanoid robot, was designed to handle the tough, menial and dangerous tasks at warehouses.

The robot’s movements, informed by years of studying how birds walk, include a slight sway in its frame when it is at rest, to dispel the discomforting stillness that bothers humans. It also doesn’t talk, because voice recognition tech is not advanced enough yet.

“Instead of designing the whole warehouse around the robots, we can now build robots that are able to operate on our terms, in our spaces, in our environments,” said Jonathan Hurst, the chief technology officer and a founder of Agility Robotics, the firm behind Digit.

Robotics and automation are not new to logistics; conveyor belts, scanners and other innovations have helped automate and accelerate the speed-obsessed industry for decades. But the pace of investment and change — fueled by the pandemic-era e-commerce boom, a tight labor market and a fragile supply chain — has taken off in recent years. Experts say robotics will change how warehouses are operated and designed.

“It’s a golden era we’re entering into,” said Tye Brady, chief technologist of Amazon Robotics. The e-commerce giant, which helped supercharge the industry’s turn toward automation in 2012 with the acquisition of the robotics company Kiva Systems, has deployed more than half a million robotics units, including Proteus, its first fully autonomous mobile robot.

Labor organizations have a different perspective. Technology can make jobs more secure and safer, but the industry is too focused on using it as a cost-saving measure, said Sheheryar Kaoosji, executive director of the Warehouse Worker Resource Center, a nonprofit group in California.

“It has always wanted to cut labor costs, and reducing human labor is something the industry has seen as a way to save money for decades,” he said.

Adoption of robotics in warehouses will increase 50 percent or more in the next five years, according to surveys taken by the Material Handling Institute, an industry trade group. The goal is mechanical orchestration, in which a team of robots, steered by sophisticated software and artificial intelligence, can move boxes and products in a seamless environment.

“I worry for those owners who don’t do it,” said Erik Nieves, chief executive of Plus One Robotics, which has teamed up with Yaskawa America to bring robotic arms to a FedEx sorting facility in Memphis. “Even today, a lot of warehouses are just racks, a cart and a clipboard. They’re just not going to be able to keep up.”

Billions are being invested by big players eager to stay on the cutting edge. Walmart, for instance, recently announced a deal with Symbotic to bring its system of belts, pickers and autonomous vehicles to all of the retailer’s 42 main sorting facilities.

Amazon, which accounted for 38 percent of robotics investment in the industry last year, announced in April a $1 billion Industrial Innovation Fund to support robotics firms like Agility. And the grocer Kroger has opened five of 20 planned warehouses outfitted with the Ocado automated system for packing and shipping fresh groceries.

The seeds of the surge in warehouse robotics were planted during the 2008 recession, when carmakers, which depend heavily on robotics, took a significant and prolonged downturn. Many current innovators have a background in the auto industry and saw logistics as ripe for innovation.

But unlike assembly line manufacturing, warehouses demand a significant degree of flexibility. Only recently have systems like visioning and artificial intelligence become cheap and powerful enough to sort the tens of thousands of different products streaming through an e-commerce warehouse. This technological leap is part of a larger embrace of robotics: The industry saw a 28 percent jump in purchases from 2020 to 2021, according to the Association for Advancing Automation.

Now, the technology is becoming more affordable and filtering down through the industry, beyond big players like Walmart and Amazon, said Rueben Scriven, a senior analyst at Interact Analysis who covers warehouse automation. He predicts a 25 percent increase in robotics and automation investment this year alone.

Real estate firms are also investing in robotics start-ups. For instance, Prologis, an industrial giant with a global warehouse network, has poured tens of millions of dollars into robotics firms through its Prologis Ventures fund.

“Netflix is the only company that could figure out streaming video, and then suddenly it wasn’t,” said Zac Stewart Rogers, a Colorado State University professor focused on logistics and warehousing who sees an emerging middle class of robotics users in the industry. “Other companies will start to catch up to Amazon’s lead.”

There’s increased demand for goods-to-person robots by firms like Fetch and Locus. These so-called cobots, which can look like bin-carrying Segways, move back and forth among workers throughout the facility. With the cost of raw materials like steel soaring, these robots become cheaper and quicker to deploy than automated conveyor systems. Some firms have even introduced “robots as a service” business models to lease these machines to warehouse operators.

Many industry analysts add that increased interest in robots stems from a tight labor market that’s due to high turnover and competitive pay in other fields. Automation is one lever that companies could pull to address the problem.

Robots won’t replace workers in the near term, Mr. Scriven said, but rather make them more efficient and productive. Humans will be crew chiefs, commanding and maintaining teams of robots.

“It will improve the quality of experience for the work force because instead of doing a rote manual thing, individuals will learn how to manage the robot to keep it up and running,” he said. “It will create a career path and a more sophisticated skill set.”

But workers have not necessarily found significant benefits in robotics advancements, said Mr. Kaoosji, the worker advocate. Investment in new technologies will need to involve the participation of labor to make sure the evolution of jobs does not leave longtime workers behind.

Working at the speed of machines will overwhelm employees, he said. “It’s basically the conveyor belt problem, like Lucy Ricardo with the chocolates in ‘I Love Lucy,’” he said. “If your machines are driving the pace of work, you have to keep with what the machine decides is your pace of work.”

Warehouse builders and operators are already asking for advice on how to optimize new spaces for the new generation of robotics, said James H. Rock, the chief executive of Seegrid, which creates autonomous mobile robots that zip across warehouse floors.

He believes that “lights out” warehouses — run by robots around the clock without requiring air conditioning or lighting tuned to human needs — will arrive in three or four years. Too many in the industry have seen the advantages in increasing efficiency and reducing costs and worker accidents, he said.

It’s unclear just how much the efficiency gains of robotics will affect the overall demand for warehouse space. Symbotic, for instance, claims it can deliver the same amount as a traditional warehouse operation in half the space. A human and robot tend to take up a similar amount of space on the warehouse floor, but only one needs a break room.

A bigger challenge is the industry’s aging spaces: A third of warehouses are more than 50 years old, with 70 percent constructed before the 21st century, according to a report from the real estate services firm Newmark. Landlords aren’t typically making these investments themselves; tenants and big retailers tend to finance the robotics and automation improvements.

Warehouses will need to be wired for greatly expanded power needs and charging stations, as well as more sophisticated wireless and 5G networks to allow the fleet of machines to communicate. Newmark found that the U.S. industrial sector’s power use will grow more than twice as fast as any other sector in real estate in coming decades.

“We’re largely building the same building,” said Steve Kros, regional partner at Transwestern, a developer focused on warehouses. “A generic, vanilla building that can accommodate the widest possible range of tenants. But now they’re using two or three times the power of previous generations of warehouses.”