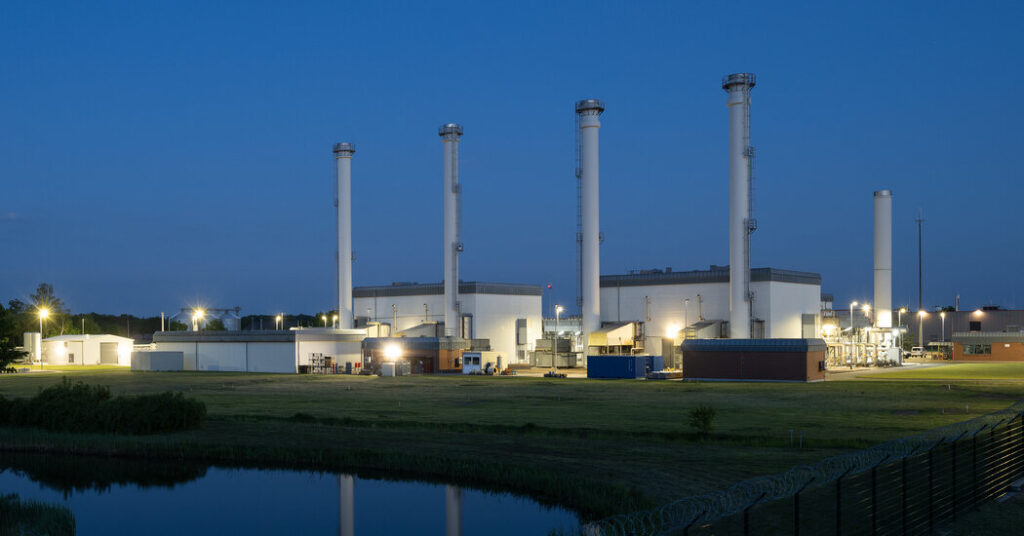 
Germany’s largest storage chamber for natural gas stretches underneath a swath of farmland the size of nine soccer fields in the western part of the country. The bucolic area has become a kind of battlefield in Europe’s effort to defend itself against a looming gas crisis driven by Russia.

Since last month, the German government has been rapidly pumping fuel into the vast underground site in Rehden, hoping to fill it in time for the winter, when demand for gas surges to heat homes and businesses.

The scene is being repeated at storage facilities across the continent, in a jousting over energy between Europe and Russia that has been escalating since Moscow’s invasion of Ukraine in February.

In the latest sign that Moscow appears intent on punishing Europe for sanctions and military support for Ukraine, Gazprom, the Russian state-controlled energy giant, last week cut by 60 percent the amount of gas it delivers via Nord Stream 1, a critical pipeline serving Germany and other countries. It is not clear if the throttling is a precursor to a complete cutoff.

The move has added urgency to efforts in Germany, in Italy and elsewhere to build up inventories of gas in a crucial effort to moderate stratospheric prices, reduce Moscow’s political leverage and head off the possibility of shortages this winter. Gazprom’s actions have also forced many countries to loosen their restrictions on power plants burning coal, a major source of greenhouse gases.

“If the storage facilities are not filled by the end of summer, the markets will interpret that as a warning of price spikes or even energy shortages,” said Henning Gloystein, a director at Eurasia Group, a political risk firm.

Gas prices are already extraordinarily high, about six times what they were a year ago. Germany’s finance minister, Christian Lindner, has warned that the persistently high energy costs were threatening to plunge Europe’s largest economy into an economic crisis, and the government has called on consumers and companies to conserve gas.

“There is a risk of a very serious economic crisis because of the sharp increase in energy prices, because of supply chain problems and because of inflation,” Mr. Lindner told ZDF public television on Tuesday.

The stage was set for an energy crisis last year. A cold snap in late winter ate into gas reserves, and Gazprom stopped selling any supplies beyond its contractual obligations. Gazprom-owned storage facilities in Germany, including the massive underground chamber in Rehde, which the German government took control of in April, were allowed to dwindle down to nearly empty.

To avoid a repeat of last year, and to safeguard against supply disruptions, the European Union agreed in May to require member states to fill their storage facilities to at least 80 percent of capacity by Nov. 1. So far, countries are making good progress toward this goal, with overall European storage levels at 55 percent.

The giant facility in Rehden is more than 12 percent full, but Germany, Europe’s largest gas consumer, has reached an overall level of 58 percent — both well above the levels this time last year. Other big gas users, including France and Italy, have stores at similar levels, while Spain has more than 77 percent.

But while storage levels are still edging up, Gazprom’s cutbacks put those targets in doubt and threaten a crunch next winter, analysts say.

If Nord Stream was shut down completely, “Europe could run out of storage of gas in January,” said Massimo Di Odoardo, vice president for gas research at Wood Mackenzie, a consulting firm.

Gazprom has blamed the cutbacks on a pipeline part that was sent for repairs and hadn’t returned in time. But European leaders have flatly rejected this argument, and a Germany regulator said it saw no indication of how a mechanical issue could result in such decreases.

“The Russian side’s justification is simply a pretext,” said Robert Habeck, Germany’s economy minister, last week. “It is obviously the strategy to unsettle and drive up prices.”

The gambit is succeeding. European gas futures have risen about 50 percent over the last week.

The reduction in supplies to the German pipeline, which also affected flows to other European countries including France, Italy and the Netherlands, dashed any remaining hope among European leaders that they can count on Russian gas, perhaps the most difficult fuel to replace.

“It is now clear that the contracts that we have with Gazprom are not worth anything anymore,” said Georg Zachmann, a senior fellow at Bruegel, a research institution in Brussels. Analysts say Moscow will probably continue to use gas for maximum leverage, doing what it can to put the brakes on Europe’s efforts to fill storage, in order to keep prices high and increase the vulnerability of countries like Germany and Italy to political pressure over energy.

In recent days, the governments of Germany, the Netherlands and Austria have all taken steps to try to conserve gas, in part by turning to coal-fired power plants that either had been shuttered or were scheduled for phaseout. The moves have raised concerns that the European Union’s effort to achieve net-zero greenhouse gas emissions by 2050 will be driven off track.

Bringing back coal sends a signal “which is inconsistent with the environmental rhetoric in recent years,” said Tim Boersma, director of global natural gas markets at Columbia University’s Center on Global Energy Policy.

The government in the Netherlands continues to resist calls from some quarters to ramp up output at Groningen, a huge gas field that is being shut down because production there has caused earthquakes.

In Berlin, Chancellor Olaf Scholz has refused to consider keeping the country’s three nuclear power plants online. The reactors are scheduled to be shut down at the end of the year as part of the country’s efforts to quit nuclear energy.

Two years ago, Germany decided to phase out coal-burning power plants by 2038, in its mission to be carbon-free by 2045. But last week Mr. Habeck, who is a member of the Greens party, announced that the government would be temporarily reversing those efforts in response to the gas cutbacks.

For RWE, a major energy provider in Germany, the reversal means a reprieve for three plants that were supposed to shut down in September. The plants burn soft coal, or lignite, the dirtiest form of the fuel. The company is now scrambling to find enough employees to keep the plants running.

The change will require a work force of “several hundred positions,” said Vera Bücker, a spokeswoman for RWE. Some of them will be filled by delaying plans for employees to retire early, while others will be new hires for jobs that are scheduled to be phased out by the first part of 2024, when the regulation expires.

The about-face on coal is a challenge for energy providers who were focusing on transitioning to natural gas as a bridge to renewable sources of energy. Now they have to find new sources of coal and set aside plans to cut carbon emissions.

“How much carbon dioxide we emit will depend on how long our plants need to run,” said Markus Hennes, the spokesman for Steag, which runs several coal-fired plants in western Germany. “But our emissions will increase. That is clear.”

More disturbing for some environmentalists, Germany and other European countries are moving quickly to build terminals to receive liquefied natural gas as an alternative to Russian gas.

On Tuesday, EnBW, a German utility, signed a 20-year deal beginning in 2026 with Venture Global, a U.S. provider of liquefied natural gas. In other words, Germany will be importing gas until 2046 under this arrangement.

“We are risking locking in a new fossil fuel era,” said Mr. Zachmann of Bruegel.