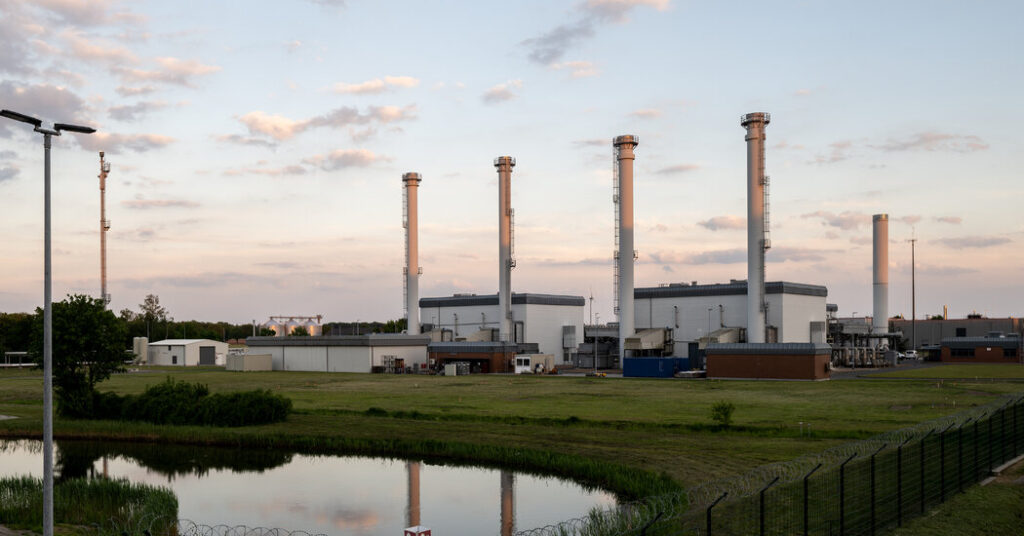 Russian Gas Flows to Germany Get Snarled in Canada


A turbine needed to ship Russian natural gas to Germany has been entangled in Canadian sanctions imposed against Moscow, prompting a steep drop in flows in a key Russian pipeline and contributing to a surge in European natural gas prices on Tuesday.

Gazprom, the Russian gas monopoly, said on Twitter on Tuesday that it was reducing volumes it sends to Germany via the Nord Stream pipeline by about 40 percent because a turbine sent for repairs had not been returned “in due time.” It said it could not provide the full amount of gas normally sent to Germany without the machine.

Siemens Energy, the Munich-based maker of the turbine, largely confirmed Gazprom’s account. It said in a statement that it had overhauled the machine at a specialist facility in Montreal but that it was “currently impossible” to return it to Gazprom “due to the sanctions imposed by Canada.”

Siemens Energy said it had informed the Canadian and German governments of the situation, and was “working on a viable solution.”

The snafu helped lift natural gas futures prices 16 percent on the Dutch TTF exchange, to about 97 euros per megawatt hour. That is less than half the high reached in March, when fears of a cutoff by Moscow were running strong, but still about five times the price of a year ago.

Adding further upward pressure to prices, a major liquefied natural gas export facility in Texas, called Freeport LNG, said Tuesday that it would require 90 days, much longer than initially expected, before even returning to partial operations after a fire on June 8. In recent months, Freeport LNG has been a large exporter of natural gas to Europe and elsewhere, helping to ease a supply crunch.

The two events appeared to pose little immediate threat of causing Germany or Europe to run out of the fuel anytime soon. Summer is a season of relatively low demand for gas, which is used for heating, and Europe has been rapidly building up its stocks in preparation for next winter.

“There are no imminent supply issues,” said Henning Gloystein, director for energy, climate and resources at Eurasia Group, a political risk firm.

And in a tweet on Tuesday, the German ministry responsible for energy said the security of natural gas supplies was “unchanged guaranteed.”

However, with the war in Ukraine grinding on and Russia still a key supplier of gas to Europe, any interruption rapidly translates into market turbulence.

Prodded by the European Union, Europe has been rapidly building up its gas reserves, hoping to head off the fear of shortages or a cutoff by Russia that drove up prices to astronomical levels, beginning last summer.

Gas storage facilities in the European Union are about 52 percent full, 10 percent better than at the same time last year. In recent weeks, Europe has been importing a surplus of gas through pipelines from Russia and elsewhere, and shipments of liquefied natural gas from the United States and other suppliers.

Now, Mr. Gloystein said, the fire at the facility in Texas and Gazprom’s actions on Nord Stream raise doubts about whether the rapid filling of storage will continue, leading to new worries about “more severe price spikes or even supply shortages next winter.”