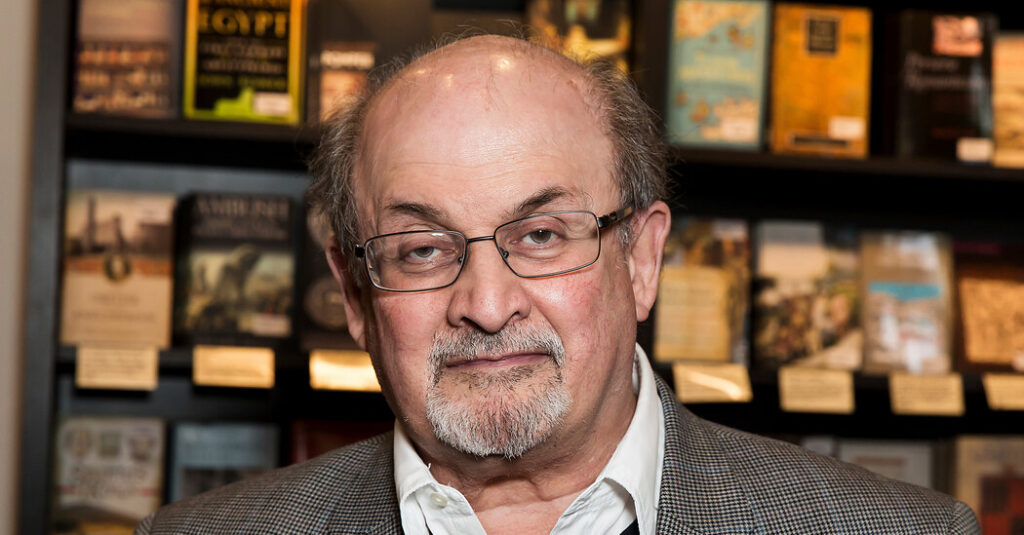 
CHAUTAUQUA, N.Y. — Salman Rushdie spent years in hiding after the leadership of Iran called for his death following the publication of his novel “The Satanic Verses.” But in recent years, declaring “Oh, I have to live my life,” he re-entered society, regularly appearing in public around New York City without evident security.

On Friday morning, any sense that threats to his life were a thing of the past was dispelled when an attacker rushed the stage of Chautauqua Institution here in Western New York, where Mr. Rushdie was scheduled to give a talk about the United States as a safe haven for exiled writers. The assailant stabbed Mr. Rushdie, 75, in the abdomen and the neck, the police and witnesses said, straining to continue the attack even as several people held him back.

Mr. Rushdie was taken by helicopter to a nearby hospital in Erie, Pa., where he was in surgery for several hours on Friday afternoon. Mr. Rushdie’s agent, Andrew Wylie, said Friday evening that Mr. Rushdie was on a ventilator and could not speak.

“The news is not good,” Mr. Wylie said in an email. “Salman will likely lose one eye; the nerves in his arm were severed; and his liver was stabbed and damaged.”

Major Eugene J. Staniszewski of the New York State Police identified the suspect in the attack as Hadi Matar, a 24-year-old New Jersey man who was arrested at the scene, but said at a news conference late Friday afternoon that there was no indication yet of a motive.

He said that the police were working with the Federal Bureau of Investigation and the local sheriff’s office and that investigators were in the process of obtaining search warrants for a backpack and electronic devices that were found at the institution.

The attack stunned onlookers, who had gathered in the 4,000-seat amphitheater at the Chautauqua Institution, a summertime destination for literary and arts programming.

“It took like five men to pull him away and he was still stabbing,” said Linda Abrams, who attended the lecture in the front row. “He was just furious, furious. Like intensely strong and just fast.”

Others described blood running down Mr. Rushdie’s cheek and pooling on the floor. A physician in attendance, Rita Landman, said that Mr. Rushdie appeared to have multiple stab wounds, including one on the right side of his neck, but that people surrounding him were saying, “he has a pulse, he has a pulse.”

Ralph Henry Reese, 73, who was onstage with Mr. Rushdie to moderate the discussion, suffered an injury to his face during the attack and was released from the hospital on Friday afternoon, the police said.

The brazen attack on Mr. Rushdie shook the literary world. Suzanne Nossel, the chief executive officer of PEN America, which promotes free expression, said in a statement that “we can think of no comparable incident of a public attack on a literary writer on American soil.”

“We revere him and our paramount concern is for his life,” said Mr. Reese. “The fact that this attack could occur in the United States is indicative of the threats to writers from many governments and from many individuals and organizations.”

Mr. Rushdie had effectively been living under a death sentence since 1989, about six months after the publication of his novel “The Satanic Verses,” which fictionalized parts of the life of the Prophet Muhammad with depictions that many Muslims found offensive and some considered blasphemous.

Ayatollah Ruhollah Khomeini, the Supreme Leader of Iran after the 1979 Iranian Revolution, issued a religious edict known as a fatwa on Feb. 14, 1989, ordering Muslims to kill Mr. Rushdie. A price was put on his head of several million dollars. Mr. Rushdie, who lived in London at the time, went into hiding, and moved into a fortified safe house under the protection of the British police for most of the next 10 years.

On Friday morning at around 10:47 a.m., Mr. Rushdie had just sat down onstage with the discussion’s moderator, Mr. Reese, the co-founder of a Pittsburgh nonprofit, City of Asylum, a residency program for exiled writers, when a man rushed the stage and attacked Mr. Rushdie, the police and several witnesses said. Audience members gasped and leaped to their feet.

Mary Newsom, who attended the lecture, said that some people thought at first that it might be a stunt. “Then it became apparent that it was clearly not a stunt,” she said.

Several witnesses said the attacker was able to reach Mr. Rushdie easily, running onstage and approaching him from behind. Chuck Koch, an attorney from Ohio who owns a house in Chautauqua, was seated in the second row and ran onstage to help subdue the attacker. Mr. Koch said that several people worked to separate the assailant from Mr. Rushdie, and were able to do so before a uniformed officer arrived and placed the attacker in handcuffs.

As the attacker was being restrained, another attendee, Bruce Johnson, saw a knife fall to the floor, he said.

Michael Hill, Chautauqua’s president, said at the news conference on Friday afternoon that Mr. Matar had a pass to access the institution’s grounds like any typical patron.

The attack was decried by literary figures and public officials. Markus Dohle, the chief executive of Penguin Random House, Mr. Rushdie’s publisher, said in a statement, “We are deeply shocked and appalled to hear of the attack.”

Prime Minister Boris Johnson of Britain said in a Twitter post that he was “appalled that Sir Salman Rushdie has been stabbed while exercising a right we should never cease to defend.”

Gov. Kathy Hochul of New York said on Twitter: “Today’s attack on Salman Rushdie was also an attack on some of our most sacred values — the free expression of thought.”

Even before the fatwa, “The Satanic Verses” was banned in a number of countries, including Bangladesh, Sudan, Sri Lanka and India, where Mr. Rushdie was born. He was barred from the country for more than a decade.

After the fatwa, a halfhearted apology from Mr. Rushdie, which he later regretted, was rejected by Iran.

Many died in protests against its publication, including 12 people in a riot in Mumbai in February 1989 and six more in another riot in Islamabad. Books were burned, and there were attacks on bookstores. People connected to the book were also targeted.

In July 1991, Hitoshi Igarashi, the novel’s Japanese translator, was stabbed to death and its Italian translator, Ettore Capriolo, was badly wounded. In October 1993, William Nygaard, the novel’s Norwegian publisher, was shot three times outside his home in Oslo and seriously injured.

The fatwa was maintained by Iran’s government after the death of Ayatollah Khomeini for nearly a decade, until 1998, when Iranian President Mohammad Khatami, who was considered relatively liberal, said that Iran no longer supported the killing. But the fatwa remains in place, reportedly with a bounty attached from an Iranian religious foundation of some $3.3 million as of 2012.

In an interview with The Sunday Times in 1995, shortly before Mr. Rushdie’s first scheduled public appearance since the fatwa — a panel in London where he discussed his new novel, “The Moor’s Last Sigh” — the author addressed his return to writing after the conflagration over “The Satanic Verses.”

“Writing this was a very important step for me,” he said in that interview. “I had spent two and a half years talking to politicians, which is not my favorite occupation. Then I realized it was foolish to let this disagreeable business get in the way of what I love doing best. I wanted to prove to myself that I could absorb what has happened to me and transcend it. And now, at least, I feel that I have.”

Since then, Mr. Rushdie has published eight novels and a 2012 memoir, “Joseph Anton,” about the fatwa. The title came from the pseudonym he used while in hiding, taken from the first names of Joseph Conrad and Anton Chekhov.

In recent years, Mr. Rushdie has enjoyed a more public life in New York City. In 2019, he spoke at a private club in Manhattan to promote his novel, “Quichotte.” Security at the event was relaxed, and Mr. Rushdie mingled with guests freely and had dinner with members of the club afterward.

Iran has not yet officially commented on the attack against the author.

But supporters of the government took to social media to praise the stabbing against Mr. Rushdie as the ayatollah’s fatwa finally materializing. Some wished for him to die. Some warned that similar fate awaits other enemies of the Islamic Republic.

A quote by Ayatollah Ali Khamenei dating back several years was widely shared, in which he says the fatwa against Mr. Rushdie was “fired like a bullet that won’t rest until it hits its target.”

Ayad Akhtar, a writer and the president of PEN America, who is friends with Mr. Rushdie and considers “The Satanic Verses” an “essential moment” in modern literary history, said he never saw Mr. Rushdie bring along any kind of security detail, whether at a theater, out to dinner or at a public event. Mr. Rushdie seemed perfectly comfortable out in the world, he said.