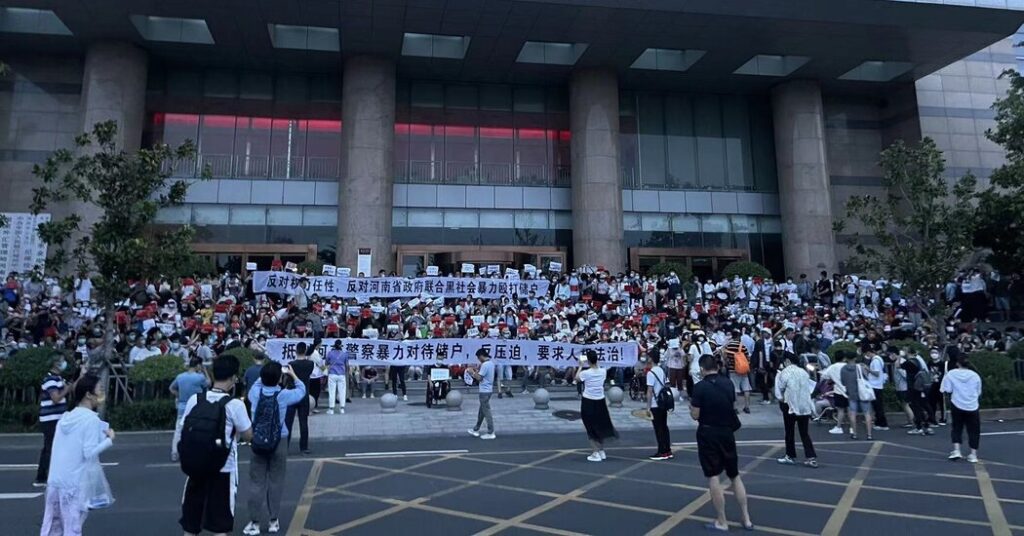 
HONG KONG — A financial scandal in central China has touched depositors across the country, some of whom placed their life savings in four rural banks offering high rates of return, then found their funds frozen as investigators examined allegations of widespread fraud.

When the bank customers began showing up in person to demand their money, the authorities in the city of Zhengzhou tried to use health code apps meant to prevent the spread of Covid-19 to prevent them from traveling.

The city retreated after a backlash, and several officials were punished. But the depositors kept coming, with as many as a thousand gathering on Sunday.

This time the authorities sent in guards en masse to break up the demonstration. They beat the protesters, kicking them to the ground and shoving them onto buses — the harshest response yet to the bank depositors’ efforts to seek redress.

Photos and video of plainclothes security agents attacking the protesters were shared on Chinese social media, stirring anger over the use of force. While protest images are often quickly censored in China, the footage from Zhengzhou was still widely available on Monday, with one hashtag viewed 32 million times on Weibo, the Twitter-like service.

The protesters had gathered in front of the Zhengzhou branch of the nation’s central bank, the People’s Bank of China. Protesters interviewed by phone said that dozens of people had been sent to local hospitals after being beaten.

“We came all the way to Zhengzhou to get our money back, and we didn’t want to have conflicts with anyone,” said Feng Tianyu, 31, who lives in the northern city of Harbin. “But the government sent so many people to deal with the unarmed people. We were cheated financially, beaten physically and traumatized mentally.”

Ms. Feng, who is two months pregnant, said men dressed in white shirts pulled her by her hair and arms onto a bus, where police officers beat some of the demonstrators. She said she was eventually taken to a hospital for stomach pains, but was refused admission.

The depositors say they are trying to recover the money they placed in rural banks using online, third-party platforms. The money has been frozen since April, when the police and banking regulators said they were investigating allegations of illegal financial activity.

Depositors from across the country have tried to go demand their money in person, even as the authorities have repeatedly shut down their messaging groups and tried to block them from traveling.

Deposits in China are guaranteed up to 500,000 Chinese yuan, about $74,500, but many customers of the Henan banks deposited far more. If the Henan government determines their deposits were part of an illegal fund-raising scheme, it could complicate any efforts to recover their money.

Many of the protesters said they put their life savings in the banks and are now destitute. Ms. Feng said she deposited about $165,000, which was all of her savings plus her father’s pension money.

“I’m pregnant and have come this far because this money is really important to me,” she said. “If I don’t get the money back, I can’t have prenatal checks, I can’t have this child, and I can’t continue to support my 2-year-old daughter.”

After reports of the protest emerged on Chinese social media, Henan banking regulators said on Sunday they were developing a plan to manage the crisis engulfing the four banks and to “protect the legitimate rights and interests of the public,” but offered no immediate details.

The China Banking and Insurance Regulatory Commission has accused the Henan New Fortune Group, a shareholder in the four banks, of illegally using third-party platforms and fund brokers to attract depositors from across the country, state media reported in April. The national regulator warned customers to not be lured by promises of extremely high returns or to hastily make bank deposits through third parties.

The police in the Henan city of Xuchang said on Monday that they were investigating a criminal gang headed by a man named Lu Yi whom they say may have used Henan New Fortune Group to amass control of the rural banks, and used fictitious loans to illegally transfer funds. The scheme, which the police said began in 2011, included setting up online platforms to promote financial products and solicit new customers, according to the police, who added that some people have been arrested.

But several demonstrators said they felt the police and regulators had done too little to protect their interests, and worried that they might never see their money. Some, noting that the alleged financial wrongdoing goes back more than a decade, raised questions about whether the authorities had ignored earlier signs of fraud. Public pressure is now their only recourse, the protesters said in interviews.

“A single person is really too powerless; we attract the government’s attention only when we all get together,” said Zhang Xia, 38, an administrative assistant from the eastern city of Hangzhou.

Ms. Zhang said she was grabbed by her arms and legs and kicked in the stomach as she was carried away from the protest site. After a brief hospital visit, she left town quickly because she feared detention in Zhengzhou, boarding a train on crutches.

“We only came to make a statement about fairness, nothing else,” she said. “These brutal beatings and repression took us by surprise.”