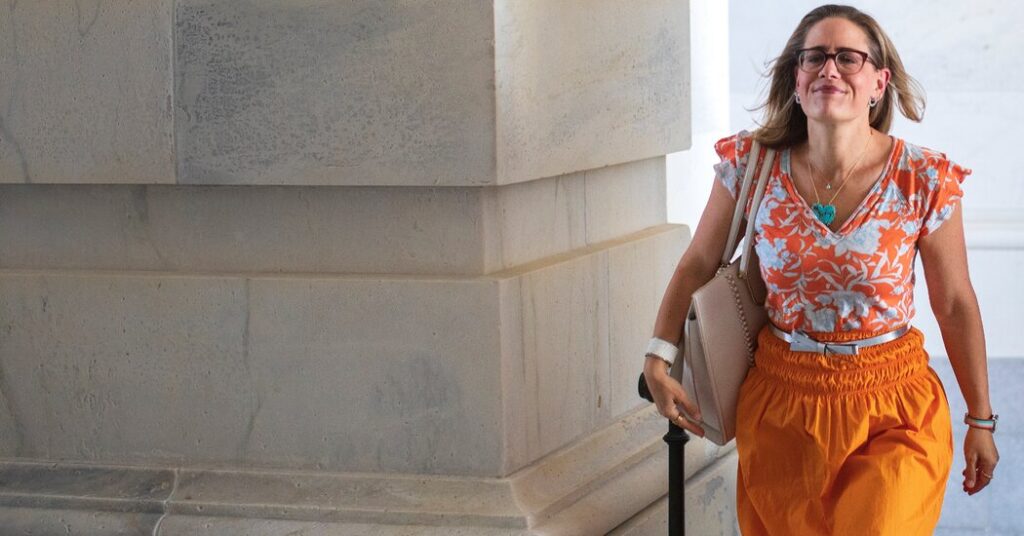 Sinema is in. But a plan to close a big tax loophole is out.

Last night, Senator Kyrsten Sinema, Democrat of Arizona, announced her support for the Inflation Reduction Act — the climate, tax and health care package that would spend about $300 billion, and raise taxes by roughly the same amount, over 10 years. With Sinema on board, the bill is likely to move quickly through the Senate.

Sinema had one main request before she would sign on: Remove a provision that would have partly closed the carried interest loophole. This bit of wiggle room in the tax code mainly benefits private equity professionals, allowing them to pay lower investment tax rates on compensation that should almost certainly be considered ordinary income. The loophole’s expected survival is being cheered by the private equity and real estate industries, but it is also causing a lot of head-scratching.

Sinema has been silent on why she considers preserving the carried interest loophole so important. She helped prevent a similar measure from being included in the Build Back Better bill last year. But there appears to be little public record of Sinema discussing why she supports special tax treatment for carried interest. According to a search of the Congressional Record, Sinema has apparently never uttered the phrase “carried interest” in a public legislative session.

But Sinema has voiced her support for private equity. On the House floor in 2016 when she was a representative, she said that private equity investors “provide billions of dollars each year to Main Street businesses,” and that this investment helped support “130,000 workers and their families” in Arizona alone.

There has been bipartisan interest in closing the loophole. Both President Biden and former President Donald Trump tried to do so. Many on Wall Street, including Jamie Dimon, chief executive of JPMorgan Chase, and Robert Rubin, a former Treasury secretary, have called for its end. And there is little evidence to back up the industry’s claim that a tax break for managers of private equity funds creates more companies and jobs.

Some speculate that campaign contributions swayed Sinema. In the past five years, Sinema has received $2.2 million from investment firms, according to Open Secrets. KKR and Goldman Sachs are among her top contributors. Still, that’s far less than what Senator Chuck Schumer of New York, the majority leader, receives in Wall Street contributions, and he supported the bill’s original carried interest fix. Even Mark Kelly, a Democrat and Arizona’s other senator, has raised more from Wall Street in the current election cycle than Sinema. But Sinema isn’t running for office again until 2024, while Kelly faces a race this year.

China halts some cooperation with the U.S. after Speaker Nancy Pelosi’s Taiwan visit. It is canceling planned meetings with the Defense Department as well as talks on maritime safety and climate. Japan condemned China for its military exercises near Taiwan, and Pelosi, visiting Japan, responded defiantly to the rising tensions.

Republican state treasurers are “weaponizing” public office against climate change. An investigation by The Times’s David Gelles uncovered a campaign to thwart regulations aimed at shifting to sustainable energy, advanced by the State Financial Officers Foundation, a little-known nonprofit group. It has been pushing officials to promote oil and gas interests, in part by cutting off financial institutions that “discriminate” against the fossil fuel industry.

A consumer watchdog scrutinizes Goldman Sachs’s account management practices. The bank said its credit card unit was being investigated by the C.F.P.B. for its handling of refunds and billing disputes, among other things. Goldman started offering a card with Apple in 2019 in an effort to diversify into retail banking.

A new proposal. The $369 billion climate and tax package that Senate Democrats proposed in July could have far-reaching effects on the environment and the economy. Here are some of the key provisions:

Energy industry. The bill would provide billions of dollars in rebates for Americans who buy energy efficient and electric appliances and tax credits for companies that build new sources of emissions-free electricity, such as wind turbines and solar panels. It would also set aside $60 billion to encourage clean energy manufacturing in the United States. It would also require businesses to pay a financial penalty per metric ton for methane emissions that exceed federal limits starting in 2024.

Warner Bros. Discovery is pivoting to the traditional. It reported a loss of $3.4 billion in its first full quarter as a merged company. Its C.E.O., David Zaslav, said it would adopt a “more sensible” approach to budgets after a Netflix-induced era of excess. The company will combine its two main streaming services, HBO Max and Discovery+, and may create an ad-supported offering.

Yesterday, both Elon Musk’s counterclaims against Twitter and its response to him were made public. The two sides largely dug in their heels on their respective arguments, with some fine-tuning. But the filings also include retellings of the deal narrative from both points of view, and — despite Musk and Twitter having agreed to a recap of how it all came together as part of their joint proxy agreement — their memories now notably diverge.

Here’s a play-by-play of the weeks leading up the deal, as both sides see it:

Musk buys up shares in Twitter starting in January. Musk says it all began because of his faith in the company, according to the filing: “Despite his growing concerns with the company’s direction, he still believed in Twitter as a product — one that provided a necessary public good while still offering significant untapped opportunity for monetization.” (The S.E.C. is looking into whether Musk’s early investments in Twitter were truly passive.)

Musk says he’s joining the Twitter board on April 5. Musk says Jack Dorsey and the Twitter board asked him to join: “Musk was hesitant at first, but listened to their pitches over the next couple weeks.” Twitter said in its proxy that joining the board was one of three paths Musk had told Twitter he planned to pursue with his stake — presumably the one that was the least threatening.

Musk rejects the board seat on April 9. Musk says he “eventually realized that Twitter’s current management was not up to the task of fixing Twitter” and he “would need more than a single board seat.” Twitter says he was rash: “Musk abruptly changed his mind about joining Twitter’s board (after first negotiating an offer to join the board, accepting it in writing, and Tweeting that he was “looking forward” to taking the position).”

Musk offers $54.20 a share to buy Twitter on April 14. Musk said this was what his bankers at Morgan Stanley told him the company was worth, using a model based “in significant part” on Twitter’s daily active user count (“mDAU”). Twitter says in its response that Musk “invented” his reliance on those disclosures, noting that it earns the bulk of its revenue from advertisers who focus on the return on investment from their campaigns.

The two sign a deal at warp speed within two weeks. Musk said Twitter moved fast because it knew it would soon be restating its user count, which “would have likely caused the Musk Parties to ask further questions that could delay the signing of the Merger Agreement.” Twitter says in its proxy that it was Musk who pushed Twitter to sell quickly: On April 24, Musk told Twitter’s chair, Bret Taylor, that he was sending over a draft merger agreement so they could have a deal by the next day’s stock market open. In its response to Musk’s claims, Twitter writes: “Musk sought an urgent deal, undertook no due diligence, and offered a self-described ‘seller friendly’ merger agreement that contained no representations about false or spam accounts or mDAU.”

“You’ve noticed I’ve said the word connection about 20 times. It’s so crucial to the psychological safety that every person — doesn’t matter if you’re young or old — needs right now in a very anxious time.”

— Claude Silver, the “chief heart officer” at the agency VaynerMedia. The pandemic and remote work have led to an increase in unusual job titles.

The legal decision has “created new uncertainty” about the role of TrafficJunky, the advertising arm of Pornhub’s parent company, MindGeek, Al Kelly, Visa’s C.E.O. and chairman, wrote in a company blog post yesterday. “Accordingly, we will suspend TrafficJunky’s Visa acceptance privileges based on the court’s decision until further notice,” he wrote. Kelly also said that his company condemned “sex trafficking, sexual exploitation and child sexual abuse.”

The pressure has been on ever since, not least from Bill Ackman, the founder of the hedge fund Pershing Square Capital Management, who is campaigning for accountability. “I just learned that @discovercard is still providing payment services to MindGeek despite @Visa and @Mastercard’s suspension,” Ackman tweeted yesterday. “This needs to stop now!” Discover did not comment in time for publication.