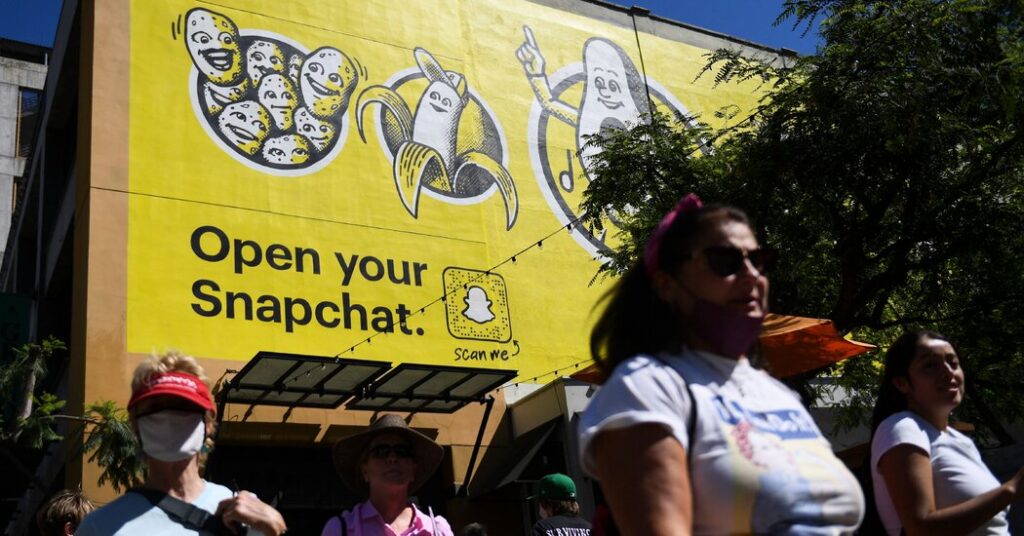 
Snap, the maker of Snapchat, on Thursday reported a wider financial loss and declined to predict its future performance because of “uncertainties related to the operating environment.”

Revenue was $1.11 billion for the second quarter, up 13 percent from a year earlier — the company’s slowest-ever rate of quarterly growth. Snap had said in May that it did not expect to meet its revenue goals for the quarter because of challenging economic conditions. The net loss was $422 million, far more than the $152 million loss from a year earlier, as the company’s spending increased nearly 29 percent.

Snap added that revenue in the current quarter was “approximately flat” from a year ago and that it would “substantially reduce” its rate of hiring. In response, the company’s stock plunged more than 25 percent in after-hours trading on Thursday, after closing at $16.35.

The one bright spot was user growth. Snap said its daily active users had increased 18 percent to 347 million in the second quarter, above the 343 million that Wall Street analysts predicted.

Evan Spiegel, Snap’s chief executive, acknowledged that user growth was not enough. “While the continued growth of our community increases the long-term opportunity for our business, our financial results (for the quarter) do not reflect our ambition,” he said in a statement.

Snap has been buffeted by rising inflation, a slowing economy and industry changes that have hurt its advertising business. Last year, Apple changed its privacy settings so that users can opt out of being tracked by apps, which has made it more difficult for social media companies to do targeted advertising.

Snap has regularly forecast its financial performance for years. By declining to do so this time, the company is emulating others that have decided to say less in a period of macroeconomic uncertainty. Apple, for one, stopped providing financial guidance early in the pandemic. Twitter, which is embroiled in a legal fight with Elon Musk over his $44 billion acquisition of the company, has not been offering financial guidance, either.

Digital advertising, which composes much of Snap’s revenue, is often cut first during periods of economic challenges — and that may be compounded by the company’s younger audience, which has less spending power — said Brent Thill, an equity analyst at Jefferies.

“The biggest factor is the pullback in the economy,” Mr. Thill said, adding: “It’s just incredible how the environment has changed. Every possible headwind is hitting them right now.”