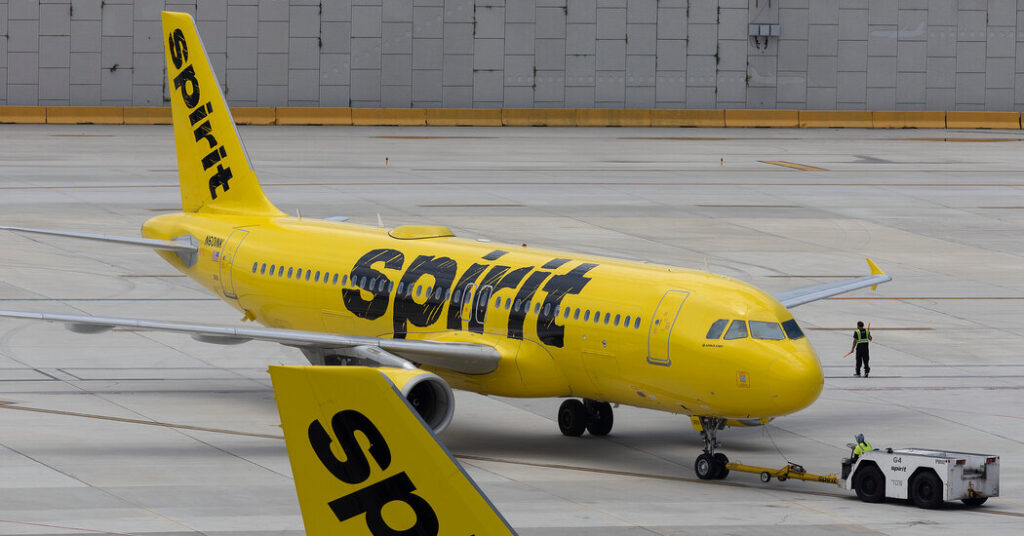 Spirit Airlines Calls Off a Thursday Reckoning on Frontier’s Bid


On the eve of a planned shareholder meeting on an acquisition by Frontier Airlines, Spirit Airlines said Wednesday evening that it was putting off the vote and would continue to talk to both Frontier and a rival suitor, JetBlue.

The postponement, until July 8, was a stunning turn in a battle that analysts say could reshape the airline sector. The decision is a blow for the leaders of Frontier and Spirit, budget carriers that want to combine so they can more effectively compete with the nation’s four dominant airlines.

The Frontier stock-and-cash proposal values Spirit at roughly $2.4 billion, while JetBlue’s all-cash offer totals about $3.6 billion. There are also competing carrots to investors, like how much the rivals would pay shareholders if regulators blocked the deal — $350 million in the case of Spirit and $400 million in the case of JetBlue.

Frontier argues that despite its offer’s lower nominal value, the share portion allows Spirit investors to further benefit should shares of the combined company climb. It has also attacked JetBlue’s bid as less likely to win regulatory approval.

Still, Frontier’s offer would also face tough scrutiny from the Biden administration, which has taken a skeptical view of large corporate mergers. The number of big airlines has drastically declined over the past two decades as carriers have merged, and customers are currently upset with airlines as they contend with mass flight cancellations.

Shares of Spirit were up 2.2 percent, to $22.90, in after-hours trading on Wednesday but still well below the $33.50 that JetBlue has offered.

Spirit and Frontier announced a proposal to merge in February. Weeks later, JetBlue countered with its offer. What followed were rounds of one-upmanship and, at times, bitter words. Spirit dismissed JetBlue’s offer as a “cynical attempt” to disrupt its merger with Frontier, while JetBlue took aim at Spirit’s board, arguing that its ties with Frontier inhibited its objectivity in evaluating the deal.

Frontier’s chief executive, Barry Biffle, was a top Spirit executive from 2005 to 2013. William A. Franke, the chairman of Frontier, is also a managing partner of Indigo Partners. the private equity firm that at one point owned both companies. He is expected to head the board if the Frontier-Spirit deal is approved. Frontier, which is now public, remains majority owned by Indigo.

Combined, Frontier and Spirit would become the fifth-largest U.S. airline, with an 8.2 percent share of the market, putting it behind American, Southwest, Delta and United.

Frontier and Spirit contend that with cost savings and a larger network, their combined carrier would be able to compete for more customers while still offering very low fares, pressuring larger rivals to hold down their fares, too.

One argument against a merger is that continued competition between Frontier and Spirit would force them to keep fares low. With a merger, some of that pressure would be relieved, which might lead them to raise not only fares but also fees — particularly on routes serving airports where both now operate, like Orlando, Fla.

Any acquisition of Spirit would have to pass antitrust scrutiny by federal regulators. One reason that regulators might oppose a merger of Spirit and Frontier is that forcing the companies to remain rivals would push them to keep fares low.

But analysts say regulators could be even more hostile toward a merger of Spirit and JetBlue, in part because the Justice Department has already taken legal action to prevent an alliance between JetBlue and American Airlines.

PrevPreviousMcKinsey Guided Companies at the Center of the Opioid Crisis
NextJohn Visentin, Xerox C.E.O., Dies at 59Next