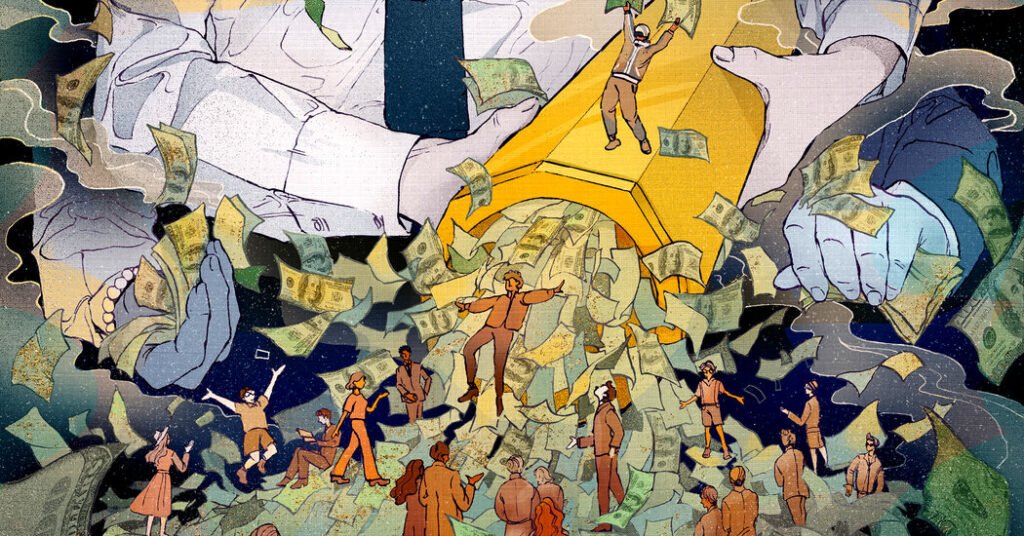 
Despite the rocky stock market and the slowing economy, corporate America is sending more money to shareholders than ever before.

The amounts are staggering, which is why these huge sums, sometimes called “windfall profits,” have become a political target.

The landmark climate and tax legislation that now goes to President Biden for his signature includes a new 1 percent tax on buybacks, for example.

Senator Chuck Schumer, the New York Democrat and Senate majority leader, announced the new tax with a succinct critique. “I hate stock buybacks,” he said. “I think they are one of the most self-serving things that corporate America does.”

Yet buybacks and dividends are immensely important to investors.

Consider that companies in the S&P 500 will spend more than $500 billion on dividends this year and more than $1 trillion on share buybacks, according to Howard Silverblatt, senior index analyst for S&P Dow Jones Indices. That’s a combined $1.5 trillion, more than ever before.

No wonder these enormous cash flows are capturing attention.

As investors, consumers or just plain citizens of the planet, it’s worth considering the significance of buybacks and dividends — whether they are a form of self-serving corporate profligacy, a wise use of capital or perhaps something in between, as Aswath Damodaran, a New York University finance professor, suggests.

“It’s really a matter of price and value,” he said in an interview. “Returning cash to investors is a good thing, if the company doesn’t have a better use for it. It’s a bad thing if it’s done in a way that destroys shareholder value. It’s all in the numbers.”

Windfall profits from energy companies have been bolstering the buyout and dividend totals.

ConocoPhillips announced earlier this month that, thanks to a special dividend, it was making “a $5 billion increase in planned 2022 return of capital to $15 billion.” EOG Resources made a similar move — declaring a special dividend of $1.50 per share, twice its regular quarterly dividend. And Exxon Mobil said that while it was maintaining its dividend, it would spend $30 billion on buybacks, tripling the previous total.

From a classic economic standpoint, the large profits by energy companies this year are just what you would expect from a sudden shock to overall supply — caused in large part by Russia’s war in Ukraine and Western sanctions. Companies that extract, refine and distribute oil and gas have been making a ton of money. While the S&P 500 has declined this year, energy companies have gained more than 40 percent, according to FactSet, far more than any other sector.

If you hold shares in a broad stock index fund, you own a piece of these companies, and they have been bolstering your own returns. In financial terms, that’s a wonderful thing.

But is it immoral?

The secretary general of the United Nations, António Guterres, says it is. “It is immoral for oil and gas companies to be making record profits from this energy crisis on the backs of the poorest people and communities and at a massive cost to the climate,” Mr. Guterres told reporters at the U.N. headquarters in New York on Aug. 3.

In a similar vein, President Biden said in June: “Exxon made more money than God this year,” and criticized the company for its plans to spend the $30 billion in stock buybacks, rather than in capital investment for oil drilling. The company says that it is doing both, and that buybacks are good for investors.

All of these companies are subject to government and shareholder pressure to transition toward greener fuels — appropriately so, in my view. And many should be moving much faster. But the world still needs the energy they are selling, so they and their shareholders are profiting.

Consider the American firms that were so flush with cash that they led the market in stock buybacks over the 12 months through June. Not one was an energy company. The leader, according to S&P Dow Jones Indices, was Apple, with $91.3 billion in buybacks. Other top buyback companies were Alphabet (parent company of Google), Meta Platforms (which owns Facebook), Microsoft and Bank of America.

“Companies like Microsoft and Apple have windfalls, year in and year out,” said Yung-Yu Ma, the chief investment strategist for BMO Wealth Management in the United States. “You don’t hear much about taxing their ‘windfall’ profits, though.”

Caterpillar, Clorox, Coca-Cola, Colgate-Palmolive and T. Rowe Price, as well as Chevron and Exxon, have been among them.

“When the markets are rising 20 percent a year, people tend to forget about dividends,” John Linehan, portfolio manager of the T. Rowe Price equity income fund, said in an interview. “But the longer your investment horizon, the more important dividends are for you.”

That’s evident in the returns calculated by Mr. Silverblatt. While the average yield for the S&P 500 from 1926 through June was 3.5 percent — about double what it is today — as a result of compounding, dividends accounted for 38.2 percent of the index’s total return, by his reckoning.

Measuring the effects of buybacks is trickier. It’s often said that repurchases increase share value by reducing the number of shares, thereby increasing earnings per share. It’s also said that buybacks are responsible for much of the upward movements of the stock market recently. The evidence is more complicated, however.

“Not widely known is that for many years after the Great Crash of 1929, the Securities and Exchange Commission (SEC) viewed buybacks as bordering on criminal activity,” Edward Yardeni and Joseph Abbott, of the independent firm Yardeni Research, wrote in their book, “Stock Buybacks: The True Story.”

The authors say the growth of buybacks is partly an unintended consequence of a change in the tax code in 1993 under President Bill Clinton that put a $1 million cap on chief executives’ salaries. Ever inventive, corporations accelerated the issuance of stock options and grants as a form of executive compensation.

As The New York Times has documented over many years, such grants have widened a pay gap with rank-and-file employees, creating billionaires in the executive suite.

When stock is issued this way to corporate executives and ordinary employees, the stake of existing shareholders is diluted. Say, for example, you own 1 out of 100 shares in a small company. After 10 new shares are issued to company employees, you will own only 1/110th of the company.

Understand Inflation and How It Affects You

A study by Citi Research found that S&P 500 companies made $882 billion in total buybacks last year, but after taking care of share dilution, just $620 billion in buybacks were left. Only that portion can reasonably be described as returning value to shareholders.

When money can be reinvested more productively by a company, shareholders are better off without dividends or buybacks.

Warren Buffett has explained this to the shareholders of Berkshire Hathaway. “Our shareholders are far wealthier today than they would be if the funds we used for acquisitions had instead been devoted to share repurchases or dividends,” he wrote in his 2012 letter to shareholders.

While he buys shares of dividend-paying companies for Berkshire, Berkshire itself doesn’t pay any dividends because he says he can invest the money better himself. Berkshire does buy back shares — it has been doing so lately — when Mr. Buffett deems the price a good bargain. Buying shares when they are priced too high destroys value.

This is core financial theory. There is art in making practical decisions that don’t merely enrich corporate executives.

From this perspective, when windfalls aren’t accompanied by attractive opportunities for corporate reinvestment, buybacks or special dividends are an excellent use of company cash.

The new 1 percent tax could shift some corporate spending from buybacks to dividends, Mr. Ma said. But between them, dividends and buybacks will remain important ways for companies return profits to shareholders.

Whether that money arrives steadily or as windfalls may matter a great deal if you need to draw on it now.

But, fundamentally, the ability of companies to generate a torrent of cash is what matters. As long as there is a lot of it, and it compounds over long periods, you will prosper.

Windfall profits? Let’s have more of them, as frequently as possible.