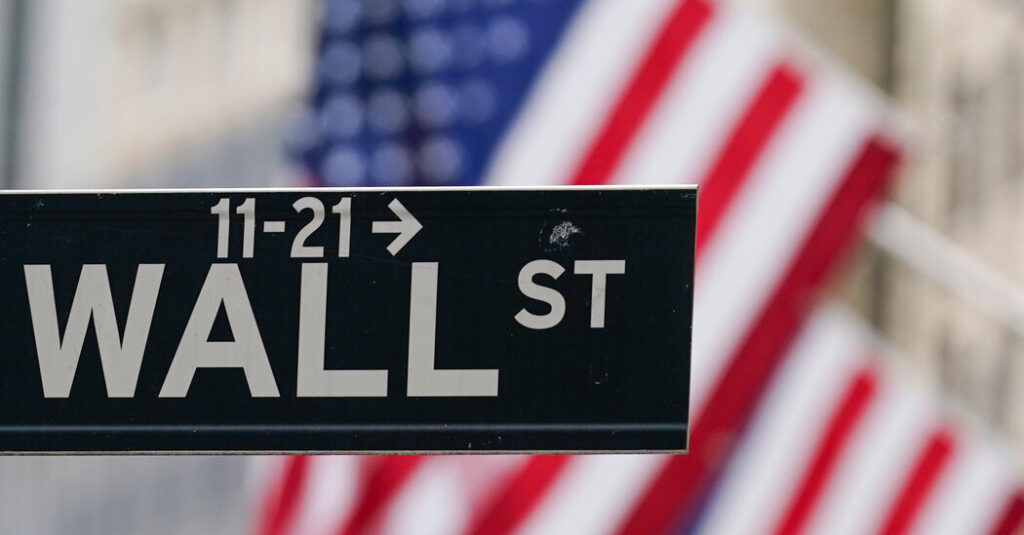 
Stocks fell Thursday as investors grappled with the possibility of another higher-than-expected interest rate increase by the Federal Reserve and some downbeat earnings reports from major banks.

Trading was turbulent, and the S&P 500 ended the day down just 0.3 percent, after earlier falling close to 2 percent. Thursday’s losses added to a series of declines that have left the index down 2.8 percent so far this week.

Companies in the United States are starting to report their earnings for the three months through June, a chance for investors to assess how hard businesses are being hit by economic headwinds including inflation and slowing growth.

On that front, shares of big banks were sharply lower after J.P. Morgan Chase reported a 28 percent decline in profit from a year ago, in part as it set aside new reserves for potential losses on its loans in its consumer business. Its Wall Street rival Morgan Stanley also said its profit fell by nearly a third from a year ago.

“We are dealing with two conflicting factors, operating on different timetables,” Jamie Dimon, J.P. Morgan Chase’s chief executive said in a news release Thursday. “The uncertainty about how high rates have to go and the never-before-seen quantitative tightening and their effects on global liquidity, combined with the war in Ukraine and its harmful effect on global energy and food prices, are very likely to have negative consequences on the global economy sometime down the road.”

The bank said it would stop buying back its shares to more quickly build reserves of capital. That decision is a signal that the bank is becoming more cautious, and similar actions by other companies could weigh on the economy.

“Historically our view is that recession is caused by companies becoming risk averse,” said Parag Thatte, a strategist at Deutsche Bank, describing it as a “key trigger” for an economic downturn.

Thursday’s selling followed a slump on Wednesday after the release of the latest report on consumer prices in the United States. The Consumer Price Index showed inflation in June was faster than anticipated, raising expectations for an even larger interest rate increase from the Fed later this month.

Central bankers have asserted that cooling inflation is their top economic priority, but investors are concerned that the measures taken to tame inflation will push the economy into a recession. Analysts have emphasized that investors need to know that inflation has peaked before the markets can recover.

“There is nothing standing between the Fed and being more aggressive,” said Victoria Greene, chief investment officer at G Squared Private Wealth.

In the futures market, traders are betting that the central bank will raise rates by as much as 1 percent at their July meeting. A week ago the probability of such a large jump in rates at a single meeting was zero.

On Thursday, Christopher Waller, a Federal Reserve governor, said that he supported increasing the central bank’s policy interest rate in July by three-quarters of a percentage point, matching an increase from June, though he suggested that an even larger move could be justified if economic data warrants it.

Government bonds also continued to send a dour economic signal: The yield on U.S. 10-year Treasury notes rose to about 2.96 percent on Thursday, but was still below the yield on two-year notes. It’s an unusual occurrence, called an inverted yield curve, and is considered a signal that bond traders are anticipating a recession.