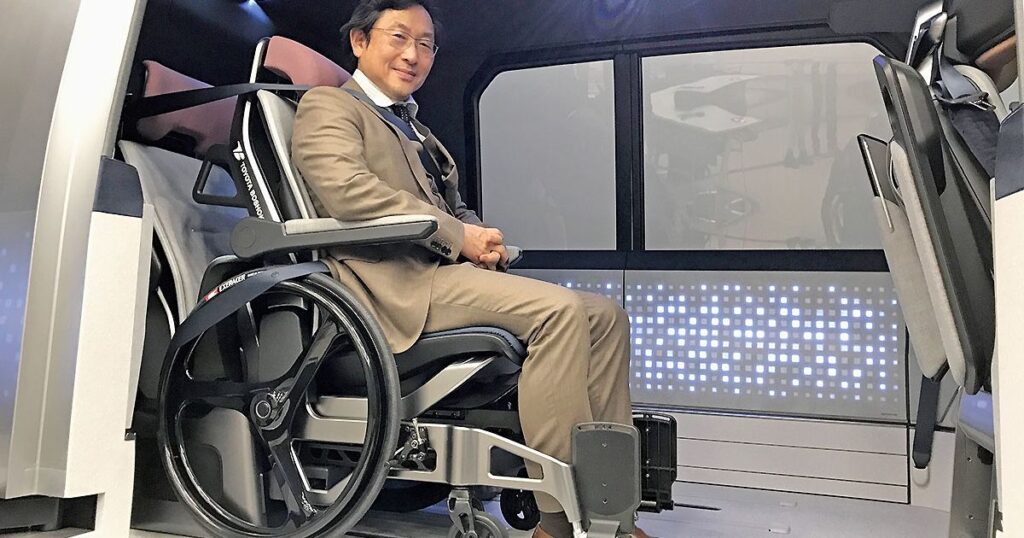 
The company was founded as textile maker Toyoda Boshoku Corp. in 1918 by Sakichi Toyoda, great-grandfather of Toyota Motor President Akio Toyoda. It changed the “d” in its corporate name to a “t” in 2004. Today, it ranks No. 27 on Automotive News‘ list of the top 100 global suppliers, with global sales of $9.33 billion in 2021.

Its new business plan counts on meeting growing demand for ride-hailing and robotaxi fleets. The strategy is partially modeled on the airline business. A carrier’s jetliners last many years, but the seats and interiors of those planes are constantly refurbished or upgraded.

Think of a plane’s upgrade for plusher seats, semiprivate premium-class pods, newly outfitted video displays or even nicer lavatories. Boshoku has been supplying interiors to the airline industry for years. In aerospace, Chung notes, a plane stays in operation for 25 years — getting a new interior every six years or so. Toyota Boshoku wants to transfer that model to fleets on the ground.

Ride-hailing and robotaxis will account for nearly 40 percent of the mobility market by 2030, when Level 3 and Level 4 automated driving become commonplace, Toyota Boshoku predicts. Owned or leased vehicles, by contrast, should make up about 30 percent of the market.

By 2050, it forecasts an even more dramatic shift, with Level 5 robotaxis making up 80 percent.

The outlook is a complete flip from the spread today. Ride-hailing accounts for a little more than 10 percent now, while robotaxis are still in development. Private vehicles hold almost 80 percent.

Meanwhile, Cruise and Waymo have won permits to launch commercial autonomous vehicle services in California. Cruise said the approval makes it the first company offering a “driverless” commercial ride-hailing service — seen as a crucial step toward a future of robotaxis.

All this movement will spur automakers to make vehicles to fill those fleets. Those such as Kia Corp. are making such purpose-built vehicles a pillar of their future expansion plans.

“The economic model is shifting toward that,” Chung said. “We are convinced that consumers will look for products or services that will give them more time saving, more convenience, more space, more privacy, more well-being and a better user experience.”

By Chung’s estimates, today’s human taxi driver averages 35,000 miles a year, on eight-hour shifts. Level 4 autonomous robotaxis, however, could operate 20 hours a day, racking up as many as 87,000 miles a year — or about 522,000 miles over the robotaxi’s anticipated six-year life span.

That equates to a lot of wear and tear. Says Chung: “They will probably need to change the interiors often because they will be used and abused.”

Toyota Boshoku plans to drive volume by selling different sets of interiors for each vehicle, such as economy, economy plus, premium and bespoke. This will allow the operator to reconfigure the pod to the customer needs of the day.

That volume would come on top of regular maintenance and replacement of parts.

“Today, over the lifetime of a vehicle, you’re just stuck with one set and just use it until the end of the life cycle. In this case, you can have different retrofits,” Chung said.

“For us, revenue will increase because for every car, we’re going to sell at least four different modules plus the replacements,” Chung said. “We want to create new demand.”

Being tethered to Toyota Motor has its benefits in a guaranteed revenue stream.

But Toyota Boshoku gets a lopsided 90 percent of its revenue from Toyota. It wagers that if it can take the lead in interiors for future mobility, it can expand its customer base beyond Toyota Motor to other automakers and fleet purveyors.

A diversified sales base won’t just benefit Toyota Boshoku; it will help Toyota Motor by giving it a stronger supplier network.