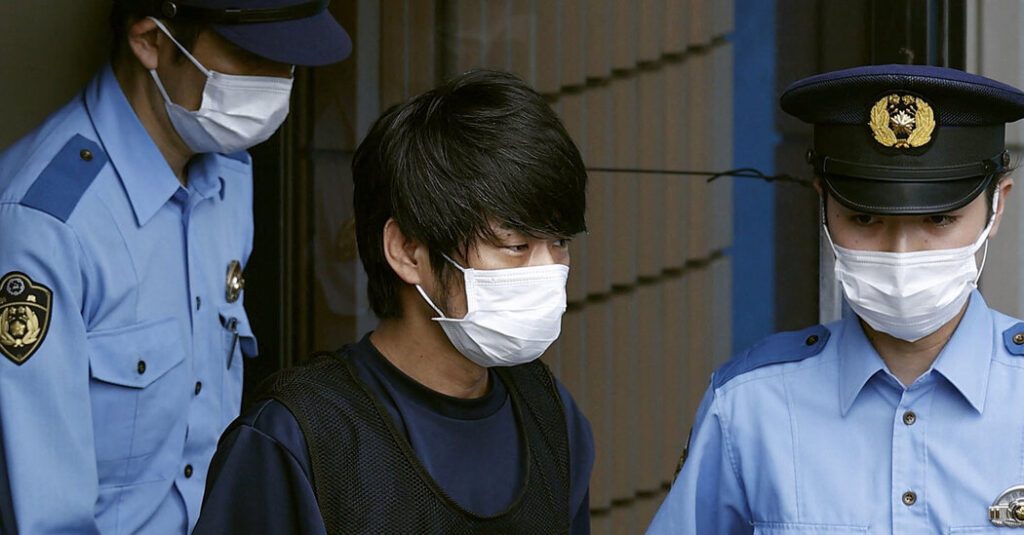 Suspect in Abe Shooting Held a ‘Grudge.’ Scrutiny Falls on a Church.


TOKYO — When Tetsuya Yamagami was arrested after the assassination of former Prime Minister Shinzo Abe of Japan, he told the police he had “a grudge” against a “certain group.” But the authorities haven’t identified the organization or explained its connection to Mr. Abe.

Scrutiny, amid a swirl of Japanese media speculation, is now focused on the Unification Church, the Christian group known for its mass weddings and efforts to cultivate relationships with conservative political parties worldwide.

At a news conference on Monday, church officials detailed the organization’s ties to Mr. Yamagami’s mother, describing her as a longtime member. She had joined the church in 1998 but lost touch with the group for a long period before returning earlier this year, Tomihiro Tanaka, the head of the church’s Japan branch, said.

The church, which did not specifically identify itself as the group cited by the police, said it had no records indicating that Mr. Yamagami had ever been a member and was not aware of any threats directed by him at its members. The church also said it had had no direct relationship with Mr. Abe, although it had interacted with other lawmakers through an affiliated organization.

The police have revealed few details about Mr. Yamagami, 41, who has been charged with murder. Mr. Abe was shot from behind with a homemade gun in Nara on Friday while delivering a speech for a candidate two days before a parliamentary election.

After his arrest, Mr. Yamagami told police that he had served in Japan’s military. A person with his same name and date of birth served three years in the country’s Navy.

The shooting shook a nation where gun violence is rare, but during a wake for Mr. Abe on Monday night at one of Tokyo’s largest Buddhist temples, there were few signs of increased security. Mourners coming in off the street deposited flowers in front of a photo of Mr. Abe. Nearby, a stream of dignitaries in black suits and dresses walked in from nearby train stations or arrived by car at a guarded gate, though no one seemed to be imposing strict security checks.

Mourners gathered one day after Mr. Abe’s Liberal Democratic Party swept to victory in elections for the Upper House of Parliament. On Monday afternoon, Prime Minister Fumio Kishida praised Mr. Abe’s leadership and pledged that the newly empowered L.D.P. would work to realize his long-held goals, including revising the country’s pacifist Constitution.

The Japanese people had issued a “rousing call,” for the party to ensure Mr. Abe’s legacy, he said. “It’s unbearable that a great leader beloved by all the world had his life suddenly robbed by violence.”

The Unification Church was founded in South Korea in 1954 by the Rev. Sun Myung Moon. It later expanded overseas, building a network of newspapers and civic organizations that it used to develop ties with conservative political parties around the world. It also generated questions about its recruiting and business practices. In the 1970s and 1980s, the group faced lawsuits over soliciting funds and charges of “brainwashing” by parents who said their children had been forced to join.

The church established its branch in Japan in the late 1950s, and it soon found common cause with right-wing Japanese politicians, including Mr. Abe’s grandfather Nobusuke Kishi, over their shared animosity for Communism.

Ties between church-affiliated organizations and members of the ruling L.D.P. developed in the following decades as the church grew in size and Japanese followers generated billions of dollars in income for the group.

But the Unification Church’s influence in Japan has dwindled in recent decades, and it has had difficulty recruiting new members since a schism following Mr. Moon’s death in 2012, said Yoshihide Sakurai, a professor of sociology and religion at Hokkaido University who has studied the Unification Church in Japan.

Groups related to the church have continued to attract some top Japanese lawmakers to their events.

In 2021, Mr. Abe and other politicians from several countries, including the United States, addressed a gathering in South Korea run by a Unification Church-affiliated group. Speaking by video feed, Mr. Abe praised the group for its “focus and emphasis on family values.”

And in 2022, during a conference in Seoul promoting peace on the Korean Peninsula, a speaker delivered brief written remarks on Mr. Abe’s behalf. They expressed hope the meeting would “open up new paths for peaceful reconciliation.”

News reports of Mr. Abe’s connection to the 2021 event drew criticism in Japan from the country’s Communist Party and other groups, including a lawyer’s association that has mounted a decades-long campaign against the Unification Church’s activities in Japan.

In an open letter to Mr. Abe, the association, The National Network of Lawyers Against Spiritual Sales, asked the former prime minister to sever his association with the church and its affiliated organizations, writing that “cooperating with and supporting these events is absolutely not a good idea.”

His connections to the Unification Church were probably “very weak,” Mr. Sakurai said, describing Mr. Abe’s remarks to the group as “ordinary work for politicians who wanted to collect votes.”

The church was just one of many religious organizations with right-wing political beliefs that Mr. Abe and his fellow conservatives in the L.D.P. have counted on for political support, said Levi McLaughlin, an associate professor at North Carolina State University who studies the connection between politics and religion in Japan.

“None of this is unusual, and it’s certainly not exclusive,” he said, adding that it just “happens that the church shares a lot of the policy platforms of the L.D.P. and specifically of Abe.”