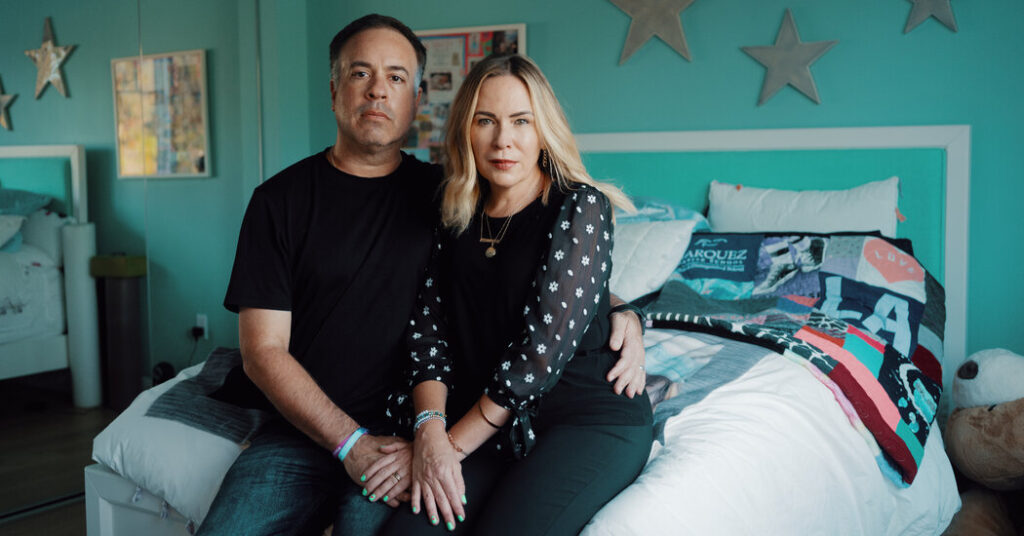 
The parents of a girl who died after an e-bike accident filed a wrongful-death lawsuit on Monday against the Seattle e-bike company Rad Power Bikes.

In the suit, Kaye and Jonathan Steinsapir, the parents of Molly Steinsapir, who died last year at age 12, claim that flaws in the bike’s design made it difficult for riders to slow down and stop as the bike gained speed while going downhill.

The suit, filed in Los Angeles County Superior Court, also argues that Rad Power Bikes engaged in “inappropriate marketing of e-bikes to children,” adding that the company failed to “adequately warn about the dangers of children operating e-bikes.”

In a statement, a Rad Power Bikes spokesman said: “The entire Rad Power Bikes team extends its deepest condolences to the Steinsapir family on the tragic loss of Molly Steinsapir. We are aware of the lawsuit that the family has filed. Rad Power Bikes does not comment on pending litigation.”

The accident occurred Jan. 31, 2021, while Molly was riding with a friend in Los Angeles. Later that day, in a Twitter post sent from Ronald Reagan UCLA Medical Center, her mother called for support: “Please. Please. Please. Everyone PRAY for my daughter Molly.”

Over the next 16 days, Ms. Steinsapir continued posting on Twitter as Molly, who had a traumatic brain injury, remained in the hospital’s pediatric intensive care unit. Ms. Steinsapir’s tweets were shared hundreds of thousands of times, and an online community formed around the hashtag #TeamMolly.

When Molly died Feb. 15, her death set off a wave of online discussion about grief and mourning nearly a year into the Covid-19 pandemic, which by then had killed more than 475,000 people in the U.S.

Molly was a passenger on a RadRunner bike, made by Rad Power, when she had her accident. On page 49 of the 57-page owner’s manual for the model, a warning says that “the RadRunner is designed for use by persons 18 years old and older.” On its website, Rad Power Bikes describes some of its bikes as suitable for riders who are 4 feet 10 inches or taller. It also includes photographs of children as passengers on its bikes. Without being pedaled, the company’s e-bikes can go 20 miles per hour.

Rad Power Bikes was founded in 2007 by Mike Radenbaugh, when he was a high school student in Humboldt County, Calif. Now based in Seattle, the company has raised more than $300 million from investors including Fidelity Management & Research in funding rounds.

Sales of e-bikes in the U.S. have increased sharply in recent years, to an estimated 804,000 in 2021 from 152,000 in 2016, according to the National Bicycle Dealers Association, an industry trade group. A study published in the peer-reviewed journal Injury Prevention in 2020 found that e-bike riders were more likely to require hospitalization after accidents than those using manual bikes. “E-bikes are clearly associated with more serious injury,” said Dr. Charles DiMaggio, a professor of surgery at New York University’s Grossman School of Medicine and an author of the study.

The Steinsapir family’s lawsuit also names Giro Sport Design, the manufacturer of the helmet that Molly was wearing. Vista Outdoor, the parent company of Giro, declined to comment.

Even as Ms. Steinsapir shared stories and photographs of her daughter on social media since her death, she did not reveal details of the accident. The lawsuit provides a more complete account.

Molly and an 11-year-old friend climbed aboard a RadRunner e-bike that belonged to the friend’s 13-year-old sister, the lawsuit says. The friend was operating the bike as Molly rode atop a flat rack over its back wheel, a feature that “invites a passenger to sit in tandem,” according to the complaint.

The two girls rode to the top of a hill that they most likely would not have been able to climb without the bike’s electric boost, the lawsuit says. After the friend turned the bike around to head back down the hill, the bike “began to rapidly pick up speed, and it began shaking,” according to the complaint. The friend “applied the rear brake, but the bicycle did not slow. She then pulled the front brake, but the bike did not stop, and the front wheel began to wobble.” She lost control, and the girls were thrown. The lawsuit claims that the Rad Runner’s “disc brakes in conjunction with a quick-release mechanism for detaching the front wheel” is “a known safety hazard” in the bike industry.

Molly lay unconscious in the road. Paramedics took her to the hospital, where she underwent several brain surgeries. She never regained consciousness, the complaint says.

Molly’s father, a lawyer, has represented the estate of Michael Jackson, among other entertainment industry clients. After his daughter’s death, Mr. Steinsapir wrote to Mr. Radenbaugh, telling him about his daughter and adding that he and his wife, also a lawyer, hoped to avoid litigation.

“We want to better understand what happened, why, and how future tragedies like this can be avoided,” Mr. Steinsapir wrote in the letter, which is included in the lawsuit. “We urge you to reach out to us and seek to have a human conversation and not a lawyerly one.” The lawsuit says that the company’s response to Mr. Steinsapir’s letter “was not productive.” The family has asked for damages in an amount to be determined by a jury.

In an interview, Molly’s parents said they felt obligated to try to make sure no other family would experience this kind of loss.

“No amount of money can bring back our daughter,” Ms. Steinsapir said. “But we can no longer sit silent.”