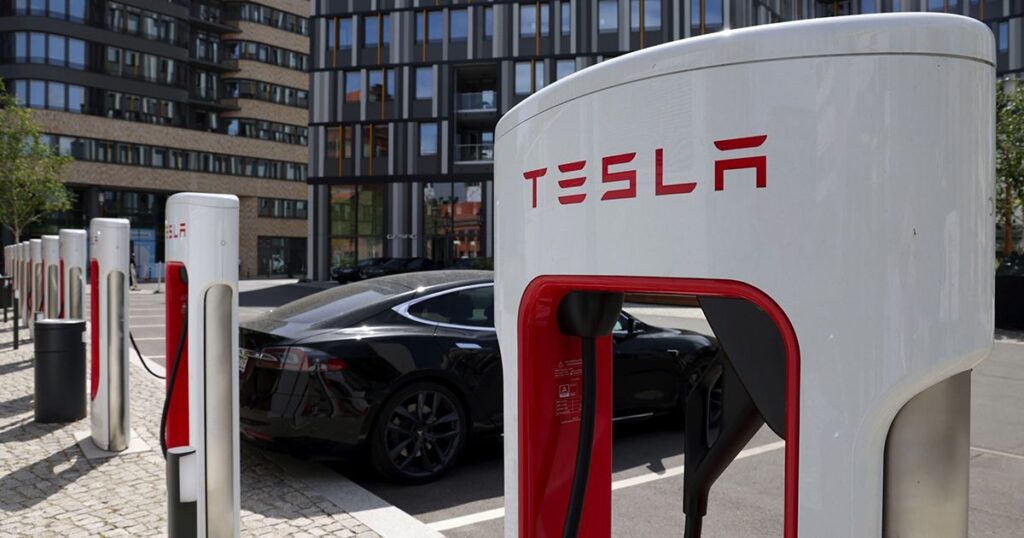 
The Cybertruck may be a different story.

“There’s going to be decent competition from the Rivian R1T, [Ford] F-150 Lightning, [Chevrolet] Silverado EV and [GMC] Hummer EV,” McDonald said. “Combined with Musk’s recent announcement that it’s going to cost more than originally promised, Tesla will probably do what it needs to qualify for at least $3,750.”

One of Tesla’s advantages under the new law is that it already has a North American supply base for batteries.

The automaker has a joint venture with Panasonic in Nevada to make cylindrical cells for its U.S.-built vehicles. That facility opened in 2016. Tesla is now ramping up its own battery production lines near its plant in Fremont, Calif., and inside its new Austin, Texas, factory. Panasonic has announced it will build a battery plant in Kansas.

The sourcing requirements of the new EV tax credit, which are complicated and will grow more stringent in coming years, are designed to push automakers to build their vehicles and batteries in North America and to source battery materials locally or through free-trade partners. Those trading partners include mineral-rich Australia and Chile.

The aim of the Inflation Reduction Act, in part, is to reduce China’s dominance of the global battery supply chain.

“At this time, it does appear that Tesla models with battery packs assembled in Nevada should be eligible for at least half of the full credit,” said Ed Kim, president and chief analyst at AutoPacific.

“Because of the free-trade agreement between the U.S. and South Korea, some Tesla models that use LG cells may be eligible for more if enough of the content of those cells is from South Korea. But at this time, the U.S. content in Tesla batteries’ supply chain is unknown to us,” Kim said, referencing battery maker LG Energy Solution.

According to consulting firm E Source, Tesla is likely to be the first automaker to sell EVs that qualify for the full $7,500 EV tax credit, beginning around mid-2024. E Source said its projections are based “on current OEM manufacturing strategies and information in the Inflation Reduction Act.”

Ford, General Motors and GM’s EV partner Honda are likely to qualify for the full credit a year later, according to the E Source forecast.

Hyundai, Rivian, Volkswagen and Volvo could follow in 2026. Tesla’s luxury rivals Mercedes, BMW and Lexus may not qualify until the later part of the decade.

E Source did not offer predictions on when automakers might qualify for a partial credit.

The new EV subsidy also comes with buyer income caps of $150,000 for single filing and $300,000 for joint filing. For high-end vehicles, those may be the chief disqualifying factors rather than battery sourcing.

Tesla’s Model S sedan and Model X crossover, with starting prices above $100,000, are in short supply without the current tax credit and won’t qualify for the new one.

“The reality is that Teslas outsell everybody without the tax credit,” McDonald said. “Fundamentally, the market has said the tax credit is not that important.”