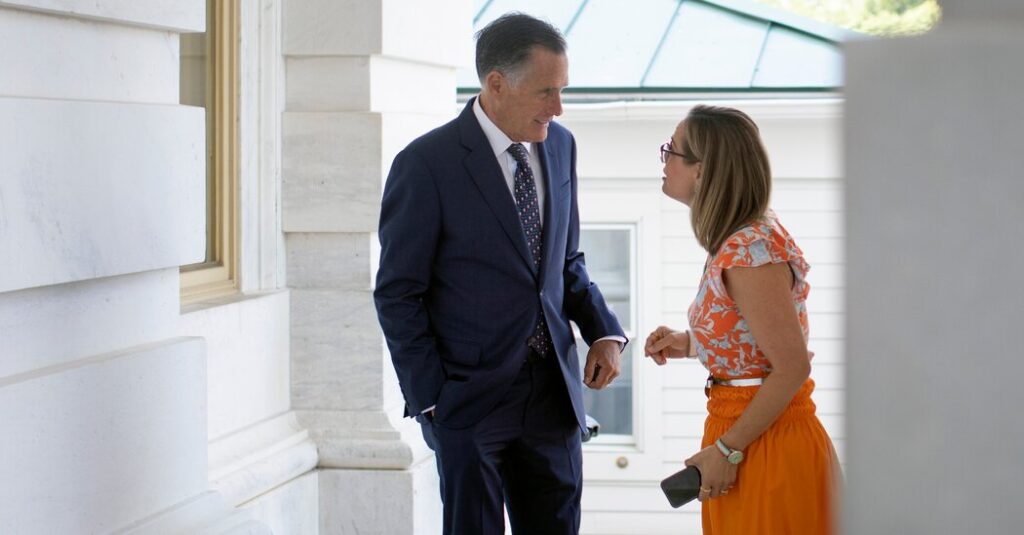 The last-minute removal by Senate Democrats of a provision in the climate and tax legislation that would narrow what is widely referred to as the “carried interest loophole” represents the latest win for the private equity and hedge fund industries. For years, those businesses have successfully lobbied to kill bills that aimed to end or limit a quirk in the tax code that allows rich executives to pay lower tax rates than many of their salaried employees.

In recent weeks, it appeared that the benefit could be scaled back, but a last-minute intervention by Senator Kyrsten Sinema, the Arizona Democrat, eliminated what would have been a $14 billion tax increase targeting private equity.

The failure of lawmakers to address a tax break that Democrats and some Republicans have said is unfair underscores the political power wielded by lobbyists for the finance industry and how difficult it can be to change a tax code that members of both parties call inequitable.

In addition to doing away with the carried interest provision, the deal Democratic leaders cut with Ms. Sinema included a 1 percent excise tax on stock buybacks and changes to a minimum corporate tax of 15 percent that favored manufacturers.

On Friday, the private equity and hedge fund industries applauded the development, describing it as a win for small business.

“The private equity industry directly employs over 11 million Americans, fuels thousands of small businesses, and delivers the strongest returns for pensions,” said Drew Maloney, chief executive of the American Investment Council, a lobbying group. “We encourage Congress to continue to support private capital investment in every state across our country.”

Bryan Corbett, the chief executive of the Managed Funds Association, said: “We’re happy to see that there is bipartisan recognition of the role that private capital plays in growing businesses and the economy.”

Carried interest is the percentage of an investment’s gains that a private equity partner or hedge fund manager takes as compensation. At most private equity firms and hedge funds, the share of profits paid to managers is about 20 percent.

Under existing law, that money is taxed at a capital-gains rate of 20 percent for top earners. That’s about half the rate of the top individual income tax bracket, which is 37 percent. A 2017 tax law passed by Republicans largely left the treatment of carried interest intact, following an intense lobbying campaign, but did narrow the exemption by requiring executives to hold their investments for at least three years in order to enjoy preferential tax treatment.

An agreement reached last week by Senator Joe Manchin III, Democrat of West Virginia, and Senator Chuck Schumer, the majority leader, would have extended that holding period to five years from three, while changing the way the period is calculated in hopes of reducing taxpayers’ ability to game the system and pay the lower 20 percent tax rate.

A new proposal. The $369 billion climate and tax package that Senate Democrats proposed in July could have far-reaching effects on the environment and the economy. Here are some of the key provisions:

Energy industry. The bill would provide billions of dollars in rebates for Americans who buy energy efficient and electric appliances and tax credits for companies that build new sources of emissions-free electricity, such as wind turbines and solar panels. It would also set aside $60 billion to encourage clean energy manufacturing in the United States. It would also require businesses to pay a financial penalty per metric ton for methane emissions that exceed federal limits starting in 2024.

But Ms. Sinema, who has been raking in political donations from wealthy financiers who usually donate to Republicans and was cool to the idea of targeting carried interest last year, objected.

In the past five years, the senator has received $2.2 million in campaign contributions from investment industry executives and political action committees, according to Open Secrets. The industry was second only to retired people in giving to Ms. Sinema and just ahead of the legal profession, which gave her $1.8 million.

For years, carried interest has been a tax policy piñata that never cracks open.

During the 2016 presidential campaign, Donald J. Trump said, “We will eliminate the carried interest deduction, well-known deduction, and other special-interest loopholes that have been so good for Wall Street investors and for people like me but unfair to American workers.”

When President Biden ran for president in 2020, his campaign said that he would “eliminate special tax breaks that reward special interests and get rid of the capital gains loophole for multimillionaires.” To do that, he said he would tax long term capital gains at the ordinary top income tax rate, essentially wiping away the special treatment of carried interest.

A similar proposal appeared in Mr. Biden’s budget last spring, but as Democrats tried unsuccessfully to pass their “Build Back Better” legislation in the summer and fall, carried interest disappeared.

Jared Bernstein, a member of the White House’s Council of Economic Advisers, lamented that the lobbyists had won.

“This is a loophole that absolutely should be closed,” Mr. Bernstein told CNBC last September. “When you go up to Capitol Hill and you start negotiating on taxes, there are more lobbyists in this town on taxes than there are members of Congress.”

There are close ties between Democrats and the private equity industry in general. Michael Shapiro, a lawyer who is married to Mr. Schumer’s daughter, recently left a job at the Department of Transportation and joined the giant investment firm Blackstone in June as director of government affairs.

“Senator Schumer is a longtime champion of closing the carried interest loophole and his support for doing so is undisputed,” said Justin Goodman, a spokesman for Mr. Schumer. “He worked until the very end to try to keep the provision in the legislation and will continue to seek opportunities to eliminate it.”

Matt Anderson, a Blackstone spokesman, said Mr. Shapiro “will not be involved in any advocacy before the majority leader or his office related to Blackstone business.”

Mr. Schumer said on Friday that Ms. Sinema had refused to support a test procedural vote to take up the package this weekend, let alone vote for final passage, had the carried interest proposal remained.

Ms. Sinema has long been a defender of the private equity industry, going back to her time in the House. In recent weeks, representatives from small business, venture capital and the renewable energy sector blanketed Ms. Sinema and her staff with information about their presence in and importance to Arizona.

The American Investment Council said that venture capital and private equity firms invested $67 billion in Arizona from 2016 to 2020, and businesses backed by private equity employ nearly 230,000 workers in the state.

Some analysts were skeptical all along that lawmakers would actually change the carried interest tax treatment in the final bill. While it has become a high-profile target, the change Democrats were seeking would have raised relatively little tax revenue compared with other provisions in the legislation, known as the Inflation Reduction Act.

“Carried interest has become the MacGuffin of the I.R.A. saga,” said James Lucier, an analyst at Capital Alpha Partners, a policy research firm in Washington, describing it as a literary device that authors include merely to make plots more interesting. “The MacGuffin distracted attention from the really important things going on in the story to make the startling conclusion even more surprising in the end.”

On Friday, some progressive policy experts shrugged off the elimination of the carried interest provision, which they considered only a modest improvement over current law.

“The proposal that was in the bill until last night made a technical adjustment in the holding period for assets that qualified for carried interest treatment,” said Jean Ross, a senior fellow at the Center for American Progress, a liberal research group in Washington. “A better approach would tackle the issue head-on and say that compensation for services managing an investment fund should be taxed like work and subject to ordinary tax rates.”

Ms. Ross added that she was pleased by the addition of the tax on stock buybacks, which some Democrats and their allies have long supported, arguing that companies are spending too much money buying back their own shares, rather than investing in research and development or giving workers raises.

Ms. Sinema herself has said little about the legislation or why she considered it so important to preserve the carried interest tax treatment.

“We have agreed to remove the carried interest tax provision, protect advanced manufacturing, and boost our clean energy economy in the Senate’s budget reconciliation legislation,” she said in a statement Thursday.

PrevPreviousAmazon to Buy Maker of the Roomba for $1.7 Billion
NextDee Hock, Credit Card Visionary, Is Dead at 93Next