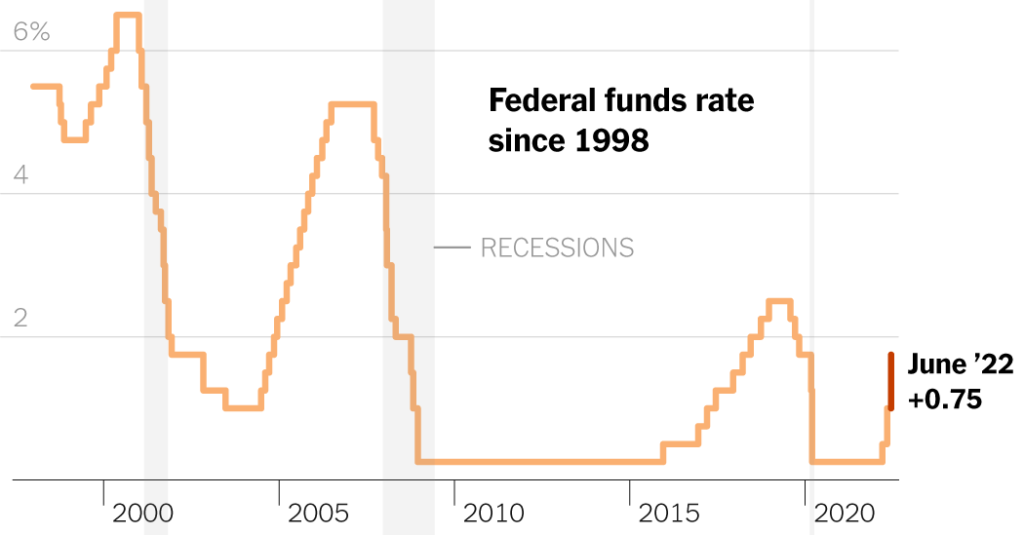 
The Federal Reserve took its most aggressive step yet to try to tame rapid and persistent inflation, raising interest rates by three-quarters of a percentage point on Wednesday and signaling that it is prepared to inflict economic pain to get prices under control.

The rate increase was the central bank’s biggest since 1994 and could be followed by a similarly sized move next month, suggested Jerome H. Powell, the Fed chair, underscoring just how much America’s unexpectedly stubborn price gains are unsettling Fed officials.

As central bankers drive their policy rate rapidly higher, it will make buying a home or expanding a business more expensive, restraining spending and slowing the broader economy. Officials expect growth to moderate in the coming months and years and predicted that unemployment will rise about half a percentage point to 4.1 percent by late 2024 as their policy squeezes companies and workers.

Mr. Powell acknowledged that it was becoming increasingly difficult for the Fed to slow inflation without causing a recession as outside forces, including the war in Ukraine and factory shutdowns in China, threaten to curb the supply of goods and commodities like oil. If the Fed has to quash demand to an extreme degree in an effort to bring it into line with limited supply, it could make for a slump that leaves businesses shuttered and people unemployed.

“We’re not trying to induce a recession right now, let’s be clear about that,” Mr. Powell said, explaining that the Fed still wants to reduce inflation to its 2 percent goal while keeping the labor market strong — an outcome economists call a “soft landing.”

But “those pathways have become much more challenging due to factors that are outside of our control,” he said, later adding that “the environment has become more difficult, clearly, in the last four or five months.”

The latest move set the Fed’s policy rate in a range of 1.50 percent to 1.75 percent, and more rate increases are to come. Mr. Powell signaled that the debate at the Federal Open Market Committee’s next meeting in July will be over whether to raise rates half a point or to repeat an increase of three-quarters of a point, though he added that he did “not expect moves of this size to be common.”

Officials expect interest rates to hit 3.4 percent by the end of 2022, according to economic projections they released Wednesday, which would be the highest level since 2008. They also foresee the Fed’s policy rate peaking at 3.8 percent at the end of 2023, up from 2.8 percent when projections were last released in March.

As rates rise, policymakers anticipate that growth will slow and joblessness will climb slightly, starting this year.

“What Powell and the rest of the F.O.M.C. are saying is that restoring price stability is the primary focus — if they risk a mild recession, or a bumpy soft landing, that would still be successful,” said Kathy Bostjancic, chief U.S. economist at Oxford Economics. “The focus is greatly on inflation right now.”

Until late last week, investors and many economists expected the central bank to raise interest rates just half a percentage point at this week’s meeting. The Fed had lifted rates by a quarter point in March and half a point in May, and had signaled that it expected to continue that pace in June and July.

But central bankers have received a spate of bad news on inflation in recent days. The Consumer Price Index jumped 8.6 percent in May from a year earlier, the fastest increase since late 1981. The pace was brisk even after the stripping out of food and fuel prices.

While the Fed’s preferred price gauge — the Personal Consumption Expenditures measure — is climbing slightly more slowly, it remains too hot for comfort as well. And consumers are beginning to expect faster inflation in the months and years ahead, based on surveys, which is a worrying development. Economists think that expectations can be self-fulfilling, causing people to ask for wage increases and accept price jumps in ways that perpetuate high inflation.

“What we’re looking for is compelling evidence that inflationary pressures are abating, and that inflation is moving back down,” Mr. Powell said at his news conference Wednesday, noting that instead the inflation situation has worsened. “We thought that strong action was warranted.”

One Fed official, the president of the Federal Reserve Bank of Kansas City, Esther George, voted against the rate increase. Though Ms. George has historically worried about high inflation and favored higher interest rates, she would have preferred a half-point move in this instance.

Some analysts found the Fed’s economic projections and Mr. Powell’s view that a soft landing may still be possible to be optimistic in light of the more aggressive policy path the central bank has charted. Economists at Wells Fargo announced after the Fed meeting that they expected a downturn to start midway through next year.

“The Fed is becoming a bit more realistic about how difficult it is going to be to lower inflation without inflicting damage on the labor market,” said Sarah House, a senior economist at Wells Fargo. “There is that growing acknowledgment that a soft landing is increasingly difficult — I still think they’re painting a fairly rosy picture.”

Stock prices have been plummeting and bond market signals are flashing red as Wall Street traders and economists increasingly expect that the economy may tip into a recession. On Wednesday, the S&P 500 rose 1.5 percent, climbing after the release of the decision and Mr. Powell’s news conference, most likely because investors had already expected the Fed to make a large move.

The economy remains strong for now, but the Fed’s actions are beginning to have a real-world impact: Mortgage rates have risen sharply and are helping to cool the housing market; demand for consumer goods is showing signs of beginning to slow as borrowing becomes more expensive; and job growth, while robust, has begun to moderate.

While the economic path ahead may be a rocky one, the Fed’s policymakers contend that things would be worse in the long run if they did not act. As prices surge, worker pay is not keeping up. That means that families are falling behind as they try to afford gas, food and rent, even in a very strong labor market.

“You really cannot have the kind of labor market we want without price stability,” Mr. Powell said Wednesday, explaining that what officials want is a job market with lots of job opportunities and rising wages. “It’s not going to happen with the levels of inflation we have.”

The White House has been emphasizing that the Fed plays the key role in bringing down inflation, even as the Biden administration does what it can to reduce some costs for beleaguered consumers and urges companies to improve gas supply.

“The Federal Reserve has a primary responsibility to control inflation,” President Biden wrote in a recent opinion column. He added that “past presidents have sought to influence its decisions inappropriately during periods of elevated inflation. I won’t do this.”

PrevPreviousInfants Died in Fisher-Price Seats That Are Not for Sleep, Safety Commission Said
NextA Chinese City May Have Used a Covid App to Block ProtestersNext