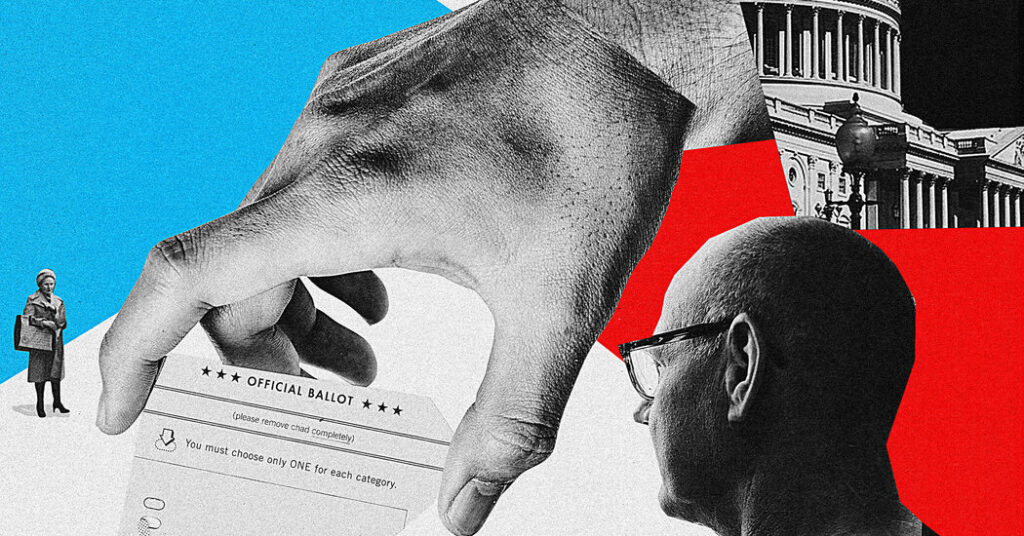 
To fight disinformation, California lawmakers are advancing a bill that would force social media companies to divulge their process for removing false, hateful or extremist material from their platforms. Texas lawmakers, by contrast, want to ban the largest of the companies — Facebook, Twitter and YouTube — from removing posts because of political points of view.

In Washington, the state attorney general persuaded a court to fine a nonprofit and its lawyer $28,000 for filing a baseless legal challenge to the 2020 governor’s race. In Alabama, lawmakers want to allow people to seek financial damages from social media platforms that shut down their accounts for having posted false content.

In the absence of significant action on disinformation at the federal level, officials in state after state are taking aim at the sources of disinformation and the platforms that propagate them — only they are doing so from starkly divergent ideological positions. In this deeply polarized era, even the fight for truth breaks along partisan lines.

The result has been a cacophony of state bills and legal maneuvers that could reinforce information bubbles in a nation increasingly divided over a variety of issues — including abortion, guns, the environment — and along geographic lines.

The midterm elections in November are driving much of the activity on the state level. In red states, the focus has been on protecting conservative voices on social media, including those spreading baseless claims of widespread electoral fraud.

In blue states, lawmakers have tried to force the same companies to do more to stop the spread of conspiracy theories and other harmful information about a broad range of topics, including voting rights and Covid-19.

“We should not stand by and just throw up our hands and say that this is an impossible beast that is just going to take over our democracy,” Washington’s governor, Jay Inslee, a Democrat, said in an interview.

Calling disinformation a “nuclear weapon” threatening the country’s democratic foundations, he supports legislation that would make it a crime to spread lies about elections. He praised the $28,000 fine levied against the advocacy group that challenged the integrity of the state’s vote in 2020.

“We ought to be creatively looking for potential ways to reduce its impact,” he said, referring to disinformation.

The biggest hurdle to new regulations — regardless of the party pushing them — is the First Amendment. Lobbyists for the social media companies say that, while they seek to moderate content, the government should not be in the business of dictating how that’s done.

Concerns over free speech defeated a bill in deeply blue Washington that would have made it a misdemeanor, punishable by up to a year in jail, for candidates or elected officials “to spread lies about free and fair elections when it has the likelihood to stoke violence.”

Governor Inslee, who faced baseless claims of election fraud after he won a third term in 2020, supported the legislation, citing the Supreme Court’s 1969 ruling in Brandenburg v. Ohio. That ruling allowed states to punish speech calling for violence or criminal acts when “such advocacy is directed to inciting or producing imminent lawless action and is likely to incite or produce such action.”

The legislation stalled in the state’s Senate in February, but Mr. Inslee said the scale of the problem required urgent action.

The scope of the problem of disinformation, and of the power of the tech companies, has begun to chip away at the notion that free speech is politically untouchable.

The new law in Texas has already reached the Supreme Court, which blocked the law from taking effect in May, though it sent the case back to a federal appeals court for further consideration. Gov. Greg Abbott, a Republican, signed the legislation last year, prompted in part by the decisions by Facebook and Twitter to shut down the accounts of former President Donald J. Trump after the Jan. 6, 2021, violence on Capitol Hill.

The court’s ruling signaled that it could revisit one core issue: whether social media platforms, like newspapers, retain a high degree of editorial freedom.

“It is not at all obvious how our existing precedents, which predate the age of the internet, should apply to large social media companies,” Justice Samuel A. Alito Jr. wrote in a dissent to the court’s emergency ruling suspending the law’s enforcement.

A Federal judge last month blocked a similar law in Florida that would have fined social media companies as much as $250,000 a day if they blocked political candidates from their platforms, which have become essential tools of modern campaigning. Other states with Republican-controlled legislatures have proposed similar measures, including Alabama, Mississippi, South Carolina, West Virginia, Ohio, Indiana, Iowa and Alaska.

Alabama’s attorney general, Steve Marshall, has created an online portal through which residents can complain that their access to social media has been restricted: alabamaag.gov/Censored. In a written response to questions, he said that social media platforms stepped up efforts to restrict content during the pandemic and the presidential election of 2020.

“During this period (and continuing to present day), social media platforms abandoned all pretense of promoting free speech — a principle on which they sold themselves to users — and openly and arrogantly proclaimed themselves the Ministry of Truth,” he wrote. “Suddenly, any viewpoint that deviated in the slightest from the prevailing orthodoxy was censored.”

Much of the activity on the state level today has been animated by the fraudulent assertion that Mr. Trump, and not President Biden, won the 2020 presidential election. Although disproved repeatedly, the claim has been cited by Republicans to introduce dozens of bills that would clamp down on absentee or mail-in voting in the states they control.

Democrats have moved in the opposite direction. Sixteen states have expanded the abilities of people to vote, which has intensified pre-emptive accusations among conservative lawmakers and commentators that the Democrats are bent on cheating.

“There is a direct line from conspiracy theories to lawsuits to legislation in states,” said Sean Morales-Doyle, the acting director of voting rights at the Brennan Center for Justice, a nonpartisan election advocacy organization at the New York University School of Law. “Now, more than ever, your voting rights depend on where you live. What we’ve seen this year is half the country going in one direction and the other half going the other direction.”

TechNet, the internet company lobbying group, has fought local proposals in dozens of states. The industry’s executives argue that variations in state legislation create a confusing patchwork of rules for companies and consumers. Instead, companies have highlighted their own enforcement of disinformation and other harmful content.

“These decisions are made as consistently as possible,” said David Edmonson, the group’s vice president for state policy and government relations.

For many politicians the issue has become a powerful cudgel against opponents, with each side accusing the other of spreading lies, and both groups criticizing the social media giants.

Florida’s governor, Ron DeSantis, a Republican, has raised campaign funds off his vow to press ahead with his fight against what he has called the “authoritarian companies” that have sought to mute conservative voices.

In Ohio, J.D. Vance, the memoirist and Republican nominee for Senate, railed against social media giants, saying they stifled news about the foreign business dealings of Hunter Biden, the president’s son.

In Missouri, Vicky Hartzler, a former congresswoman running for the Republican nomination for Senate, released a television ad criticizing Twitter for suspending her personal account after she posted remarks about transgender athletes. “They want to cancel you,” she said in the ad, defending her remarks as “what God intended.”

OnMessage, a polling firm that counts the National Republican Senatorial Committee as a client, reported that 80 percent of primary voters surveyed in 2021 said they believed that technology companies were too powerful and needed to be held accountable. Six years earlier, only 20 percent said so.

“Voters have a palpable fear of cancel culture and how tech is censoring political views.” said Chris Hartline, a spokesman for the National Republican Senatorial Committee.

In blue states, Democrats have focused more directly on the harm disinformation inflicts on society, including through false claims about elections or Covid and through racist or antisemitic material that has motivated violent attacks like the massacre at a supermarket in Buffalo in May.

Connecticut, plans to spend nearly $2 million on marketing to share factual information about voting and to create a position for an expert to root out misinformation narratives about voting before they go viral. A similar effort to create a disinformation board at the Department of Homeland Security provoked a political fury before its work was suspended in May pending an internal review.

In California, the State Senate is moving forward with legislation that would require social media companies to disclose their policies regarding hate speech, disinformation, extremism, harassment and foreign political interference. (The legislation would not compel them to restrict content.) Another bill would allow civil lawsuits against large social media platforms like TikTok and Meta’s Facebook and Instagram if their products were proven to have addicted children.

“All of these different challenges that we’re facing have a common thread, and the common thread is the power of social media to amplify really problematic content,” said Assemblyman Jesse Gabriel of California, a Democrat, who sponsored the legislation to require greater transparency from social media platforms. “That has significant consequences both online and in physical spaces.”

It seems unlikely that the flurry of legislative activity will have a significant impact before this fall’s elections; social media companies will have no single response acceptable to both sides when accusations of disinformation inevitably arise.

“Any election cycle brings intense new content challenges for platforms, but the November midterms seem likely to be particularly explosive,” said Matt Perault, a director of the Center on Technology Policy at the University of North Carolina. “With abortion, guns, democratic participation at the forefront of voters’ minds, platforms will face intense challenges in moderating speech. It’s likely that neither side will be satisfied by the decisions platforms make.”