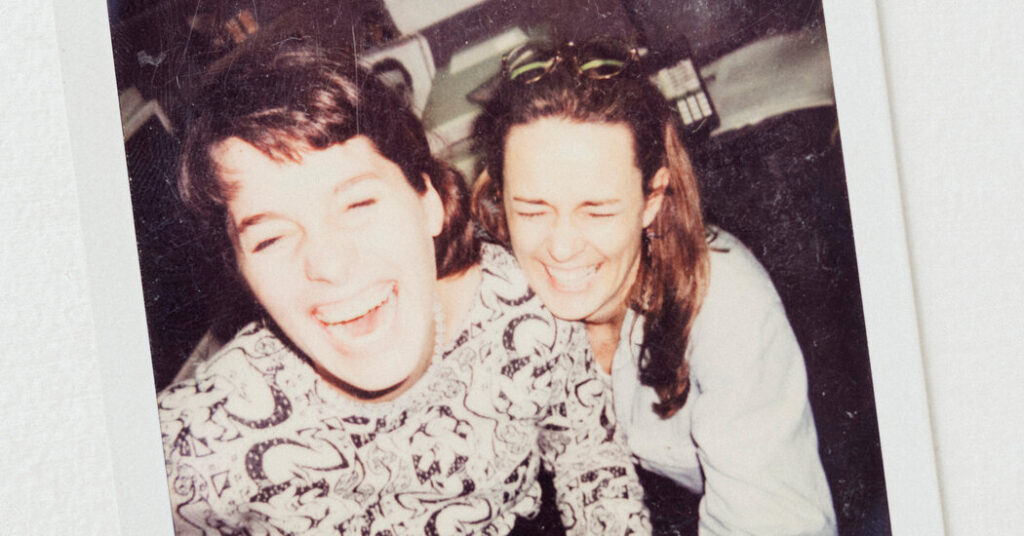 The Magic of Your First Work Friends


The things that Lisa Degliantoni learned at 22 from the two best friends she met at her New York City publishing job included but were not limited to:

Ms. Degliantoni, now 50, feels that she owes parts of her career, her family and her very sense of self in the workplace to those two first work friends, Ginny Cahill, 61, and Molly Miller, 56.

There’s an electricity to forming that first close friend at work. It’s the thrill of staying too late at drinks to keep giggling. It’s the delight of darting to someone’s desk and dragging her to the bathroom to gossip. It’s the tenderness of showing up to work on a rough morning and realizing a co-worker will know instantly that something is wrong.

Those early-career friendships have become something of an endangered species. For some young people, including those who work in industries like tech and law that have yet to fully return to the office, work life now means taking video calls from bed. They have yet to meet their co-workers in person — let alone form the relationships that feel most consequential at the start of a career. Ms. Degliantoni, for example, felt that her first work friends fell somewhere between pals and fairy godmothers.

“You’re a different person every minute when you’re in your 20s, but these friends really were crystallizing the person I wanted to become,” Ms. Degliantoni said.

Employers are trying their best to make up for lost in-person time, with office occupancy across the country still under 50 percent. Some three million professional roles went permanently remote at the end of 2021. So, managers have planned virtual trivia sessions, virtual cocktail hours, off-sites and on-sites. This year, Salesforce opened Trailblazer Ranch, where employees can come together for nature walks, yoga, cooking classes and meditation. Zillow, which says it is “headquartered in the cloud,” is renovating some of its office spaces to look more like living rooms, so workers will feel cozy spending time together there.

But, for many, there’s an irrefutable loneliness in all this talking through screens. Marin Callaway, 26, started her career in 2018 at a public defender’s office, where the stakes of the work seemed to heighten the stakes of the work friendships. She saw colleagues cry when a client lost a case. She, too, shared her grief with teammates when she lost a relative, knowing they would say all the right things.

Now, Ms. Callaway is completing a legal internship in a Los Angeles office that often feels empty. Sometimes the floor is so void of movement that the motion-sensor lights go out.

“I’m really just going in because my place has no air-conditioning,” Ms. Callaway said. “People younger than me that haven’t had that full-time work experience in an office don’t really know what they’re missing out on.”

What you miss when Zoom is the water cooler

Every time he asked a colleague to have Zoom coffee last year, Abe Baker-Butler, 20, worried about Abilene.

When he was a kid, his parents talked through the family’s plans, like going to the mall or seeing a silly movie, by referring to the Abilene Paradox — that is, when the desire to be agreeable leads a group of people to do something that no one in the group wants to do. (The name comes from a regrettable trip the scholar who explained the paradox once took with his family to Abilene, Texas.)

That was what Mr. Baker-Butler thought about when, during a recent internship, he asked colleagues to have lunch with him virtually, knowing that nobody wanted one more hour of sitting in front of the computer eating leftover pasta. It wasn’t until nine months into his internship that he was finally able to enter the nonprofit’s office and realized what he’d been missing.

“When people were having relationship troubles or going to visit their families, I heard about that in person,” he said. “I could tell when my colleagues were frustrated, tired, excited, or who likes plain foods versus food with lots of spices and sauces.”

In 1993, Gallup published a list of the 12 elements that a workplace needed. According to Gallup’s chief workplace scientist, Jim Harter, one of the items surprised clients: Employees should be able to affirm, “I have a best friend at work.” Two in 10 U.S. workers tend to answer with a strong yes, and doing so can mean seven times higher job satisfaction and less cortisol in times of stress.

Executives devoting their energy to boosting friendships — through, say, off-sites or retreats — often talk about how workplace friendships benefit productivity. People with a best friend at work are more engaged in their jobs. Their organizations have fewer accidents, happier customers and higher profits. Workplace friendships, in other words, are good for business.

When the office slipped away for so many in March 2020, some opportunities for friend-making went with it. The share of hybrid employees who have a best friend at work dropped from 22 percent in 2019 to 18 percent this year, according to Gallup.

Businesses kept humming along anyway. Companies stayed productive even with their workers squirreled away at home and forming bonds rooted entirely in well-timed emojis.

Many have tried out extreme forms of long-distance bonding. Andrew Pauly, 32, who works at the Planetary Society, attended a virtual watch party of “2001: A Space Odyssey” with his teammates, in which they all cracked open beers and traded interpretations of the film, trying to replicate the joys of sitting around the office doing bits from “I Think You Should Leave.” It wasn’t quite the same.

For those who have spent decades working in an office, something has been lost in the transition to remote work. Way beyond the business case for work friends is a hunger for the type of relationships that transform everyone involved.

“I really made my best friends in publishing,” Ms. Degliantoni said. “Here I was becoming this person — taking the train, dressing up, having a real job — and they were helping guide me through it.”

Mollie West Duffy and Liz Fosslien, the authors of “Big Feelings: How to Be Okay When Things Are Not Okay,” have created a typology of workplace friends. There’s the confidant, who can be entrusted with any secret; there’s the inspiration, also known as a platonic work crush; there’s the frenemy, who can stir up competitive feelings but also push for your success. (The authors’ own relationship, born of a mutual friend, was deepened when they realized how much they enjoyed writing and illustrating together.)

“The ties you make in your 20s tend to withstand the life changes that happen in your 30s,” Ms. West Duffy said.

On the flip side of all that growth and change, the absence of workplace friends can result in something simpler: loneliness.

Marisa G. Franco, 31, a psychologist and the author of the forthcoming book “Platonic: How the Science of Attachment Can Help You Make — and Keep — Friends,” started her first job at a university, about five years ago, determined not to focus on befriending her colleagues. She was the only Black assistant professor on the faculty, and she didn’t want to open herself up to her white colleagues and risk judgment.

“I felt the weight of being very different, and worried the more I exposed myself to them, the more I might experience racism and microaggressions,” Dr. Franco recalled.

She didn’t worry about being disconnected, because she spent her days surrounded by people. But randomly, one afternoon, she decided to measure herself on the U.C.L.A. Loneliness Scale, which gauges feelings of isolation. She realized that although she had colleagues all around her, she felt very much alone, because they knew nothing about her beyond her work.

So, when Dr. Franco started a new job in 2019 with the federal government, she decided to start revealing more about herself to the people around her. She talked about summer plans and vacations. She told them about microaggressions she’d experienced in the workplace, like being mistaken for a Black colleague.

For Dr. Franco, forming friendships at work helped her reshape the way she saw herself. “Friends mirror our identity back to us,” she said.

“Let’s say you just got promoted, and you’re taking on a new role, and you feel sort of insecure about it, but all your colleagues are looking to you as the leader,” she continued. “It can help you feel less like an impostor.”

Amos Tversky and Daniel Kahneman are renowned psychologists whose research has helped explain the way our minds work. But their collaboration also revealed something beyond the workings of the brain, which was the workings of the heart. Their early years together, before a fallout, which was chronicled in a book by the journalist Michael Lewis, offer a prime example of what can make a friendship formed over shared work so magical.

They cracked each other up, completed each other’s sentences and even shared a typewriter. When they first worked on a paper together, the partnership felt so seamless that they couldn’t decide who should be the lead author. They flipped a coin.

Mr. Lewis, whose book about Dr. Kahneman and Dr. Tversky’s partnership is titled “The Undoing Project,” said what made collaborative friendships unique was their entanglement with personal ambitions.

“What distinguishes the work friendship is that there’s a product, that you’re actually creating something together,” Mr. Lewis said.

In conversations with dozens of people about remote work, many described a sense of loss when that creative process was confined to their laptops. It turns out that goose bumps-inducing closeness is hard to replicate online. Take Abigail Jacob, 21, a student at the University of Michigan, who is interning in a fairly empty Lower Manhattan office and sometimes taking video calls with colleagues who are working from home.

“I go in every day, sit there in professional clothes in front of the computer and keep going until I leave,” Ms. Jacob said. “I do wonder what a more full, lively office would be like.”

Ms. Degliantoni wonders how a younger version of herself would have turned out if she hadn’t shown up in an office for her first day of work back in 1995. That morning, she was sitting in her cubicle when she overheard two women talking about basketball.

“I totally interrupted them, and I’m like, ‘What are you talking about? What basketball game?’” she recalled. “You could tell they were like, ‘Who is this annoying intern talking to us?’”

One of those women was Ms. Cahill (an art director who once worked for The New York Times), and the other was Ms. Miller. More than 25 years later, they remain her best friends. Ms. Degliantoni sometimes thinks: Thank God I popped my head over that cubicle. If she hadn’t, she might have quit publishing altogether, as she’d intended to do at 26, before Ms. Cahill intervened. She might not have applied for certain promotions or spoken up in meetings. Also, all of it just wouldn’t have been as fun.

“It’s really important for people coming up to see examples of what their future could or could not look like,” Ms. Degliantoni said. “That’s one of the best things about office culture. You can learn who you want to be.”

PrevPreviousFacts Were Sparse on an Abortion Case. But That Didn’t Stop the Attacks.
NextDemocrats Face Deepening Peril as Republicans Seize on Inflation FearsNext