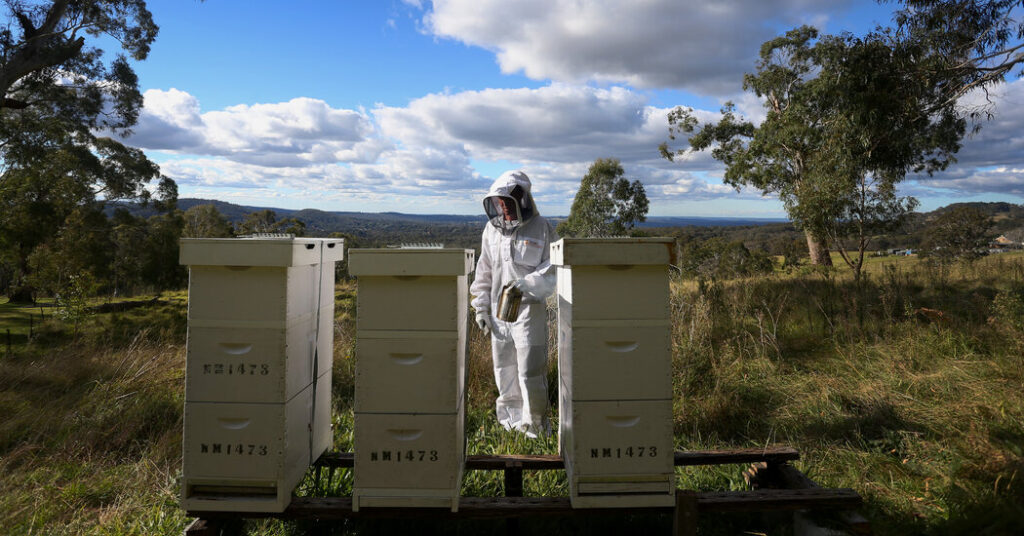 To Save Its Honey Industry, Australia Is Killing Bees by the Millions


The first step is pouring gasoline into the beehive. Then it’s time to wait. The job is finished when the hive is burned the next day.

Since last week, this cycle has been on repeat near a port in eastern Australia, part of a government effort to protect the country’s multimillion dollar honey industry.

Millions of bees have been destroyed to help contain the spread of the deadly varroa mite, which reappeared in the country last week near the Port of Newcastle.

“Australia is the only major honey-producing country free from varroa mite,” said Satendra Kumar, the chief plant protection officer of New South Wales state, where the pest was discovered on Friday. If the varroa mite became established in Australia, he said, it could cost the nation’s honey industry more than $70 million a year, in addition to its effect on the crops that rely on bee pollination.

The global farming industry is already reeling from higher prices for fertilizers, fuel and machinery, as well as supply chain problems caused by the coronavirus pandemic. The Ukraine war is an additional blow.

The authorities have ordered a virtual lockdown of the beehives in the affected area of the state. Normally, beehives are moved from place to place, a process crucial to Australia’s $15 billion horticulture industry because they are used to help pollinate crops.

The mites, which are reddish-brown and about the size of a sesame seed, can spread from bee to bee and through beekeeping equipment, including combs that have been extracted. If left untreated, the mites could kill an entire colony of honey bees, the government has said.

It’s not easy to contain the mite, with even the New South Wales government agency in charge of the eradication effort conceding that “it is generally accepted that it is inevitable that varroa mites will eventually establish in Australia.”

Still, the government is trying hard to postpone the inevitable. Previous incursions, in 2016, 2019 and 2020, are considered to have been successfully eradicated, according to the Queensland Department of Agriculture and Fisheries.

One of the biggest challenges in the current containment effort is figuring out the location of infected hives and mapping their spread in a vast region, according to Danny Le Feuvre, the acting head of the Australian Honey Bee Industrial Council. It’s necessary to contain the Port of Newcastle and the hives within a 31-mile radius of it, he said.

The port is a major shipping destination and one of the world’s busiest export hubs for coal.

Mr. Feuvre and his team have partnered with at least 300 beekeepers to visit farms and help the authorities in their inspection drives. They wash the hives with alcohol and use sticky mats to check whether the bees are infected with the mites.

But the authorities have found at least nine more locations with infections — one as far as 235 miles away, near the city of Dubbo. Many more bees are at the risk of being destroyed in the next few days, Dugald Saunders, the state’s agriculture minister, said at a news conference on Thursday.

“The beekeepers are very nervous at the moment,” Mr. Feuvre said.

He said he was confident the country would be able to contain the spread, given its history of previous eradication efforts of honey bee mites and strict controls at all airports barring passengers from bringing live plants, soil, fruits and vegetables into Australia.

“We’ve eradicated them for this long,” he said. “We’re going to give it our best shot.”