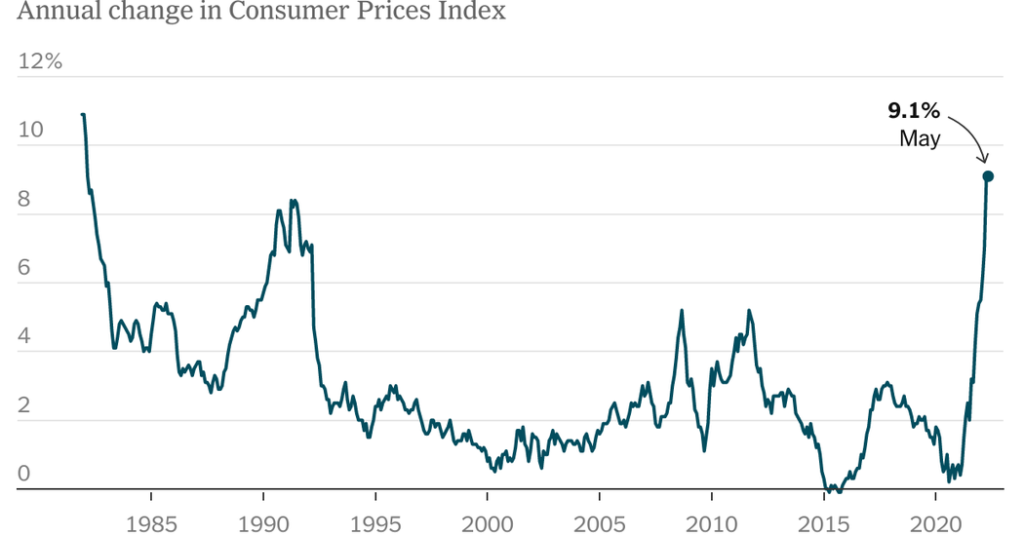 
The inflation rate was pushed to a fresh 40-year high, the nation’s statistics agency said on Wednesday, by rising food prices in particular. In Britain, a cost-of-living crisis has intensified as wage growth hasn’t kept up with rising prices. Pandemic-related supply chain disruptions and the war in Ukraine have caused the price of essentials such as food and fuel to soar, squeezing household budgets. In May, bread, cereal and meat prices were 10 percent higher than a year earlier, according to the Office for National Statistics.

Britons still face many more months of rapidly rising prices. Inflation isn’t forecast to peak until it reaches 11 percent in October, when a price cap on household electricity and gas bills resets again. This month, the Organization for Economic Cooperation and Development forecast British inflation to average 8.8 percent this year, compared with about 7 percent in the United States and the eurozone.

In an effort to ease inflation, the Bank of England has raised interest rates to 1.25 percent, the highest since 2009. Last week, the central bank said it would “act forcefully” against persistent inflationary pressures. Policymakers have expressed concern that above-average price increases are spreading to more goods and services, and evidence that inflation is no longer just being imported into the country through energy and commodity prices.

Instead, it appears inflation is increasingly fueled by companies increasing their prices to cover their own costs and wages, and paying bonuses to attract workers in a tight labor market. Prices of goods sold by British manufacturers, known as output producer price inflation, rose 15.7 percent in May from a year earlier, the highest gain since 1977, in large part because of an increase in food product prices, the statistics office said on Wednesday.

The squeeze on incomes has forced the government to offer aid to households with direct payments and reduced energy bills. But with average pay, once adjusted for inflation, falling the most in more than a decade, the government is facing the prospect of a summer of strikes as workers in a variety of industries, including teachers and National Health Service workers, threaten to walk off the job. Next week, criminal defense barristers will strike over cuts to legal aid.