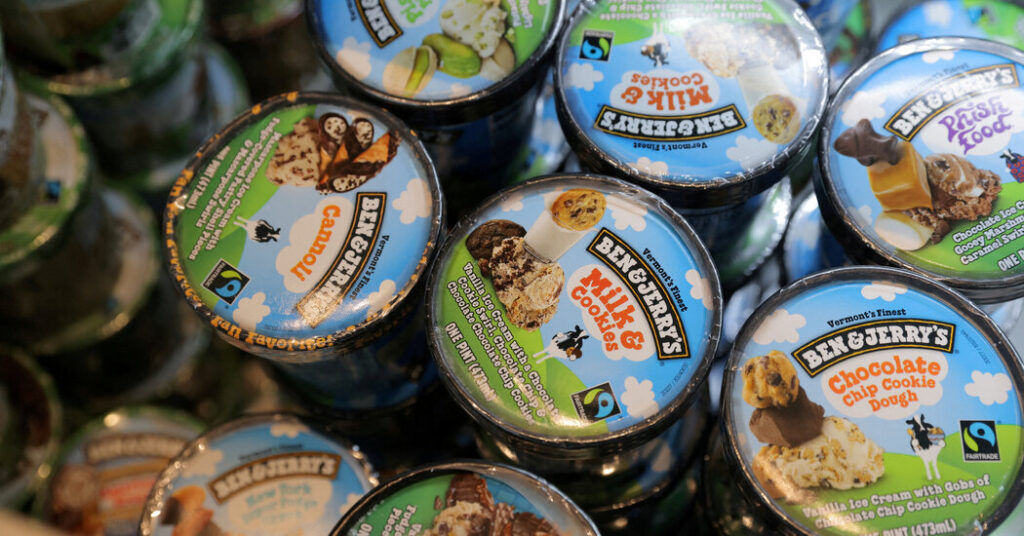 
A day after Walmart warned investors that its profit would shrink as rising prices forced shoppers to make fewer purchases at its stores, Unilever, the consumer goods giant whose products line retailers’ shelves, reinforced the message.

On Tuesday the maker of Dove soap, Ben & Jerry’s ice cream and Hellmann’s mayonnaise said it raised prices until they were 11 percent higher than in the same quarter last year, offsetting a 2 percent decline in the volume of things that consumers bought. It was the fourth consecutive quarter in which prices outpaced volume growth at the company.

Unilever raised its forecast for revenue this year but said that its profit would likely be at the bottom of its expected range. The company said its costs, driven by an increase in the prices of plastics, palm oil, aluminum and other commodities, would rise by 4.6 billion euros ($4.7 billion) this year, more than three times its costs last year.

Passing higher prices on to shoppers has led some to buy less or trade down to cheaper store brands, Unilever’s results suggested, a trend also seen in Walmart’s recent financial reports. To keep its higher-priced brands in consumers’ minds, Unilever said that it added €200 million to its marketing budget in the first half of the year, another factor that put a dent in its profits.

“The challenges of inflation persist and the global macroeconomic outlook is uncertain,” Alan Jope, Unilever’s chief executive, said in a statement. But investors appeared heartened by Unilever’s ability to navigate this fragile economic moment, with its London-listed shares rising nearly 3 percent.

A sign that premium brands can in some cases retain customers despite higher prices came from Unilever’s ice cream division, one of the few categories to record volume growth. Separately, in a similar vein the upmarket Swiss chocolatier Lindt & Sprüngli on Tuesday reported better-than-expected sales and profit growth for the second quarter, pushing its stock up more than 4 percent in Zurich.

Walmart’s stock was down about 9 percent in premarket trading. The retail giant’s warning that it would need to continue marking down inventory that wasn’t selling because many shoppers were shifting to cheaper, lower-margin products showed how quickly inflation has gripped the economy. Last month, Target also warned that its profits would be lower because of inventory markdowns.

The Federal Reserve is expected to act aggressively this week to rein in rising prices with another large interest rate increase, a move that risks tipping the economy into recession. More signs of how stubbornly high inflation is hitting people’s wallets will come from financial reports by Coca-Cola, McDonald’s, and other consumer-facing companies set to be released later on Tuesday.