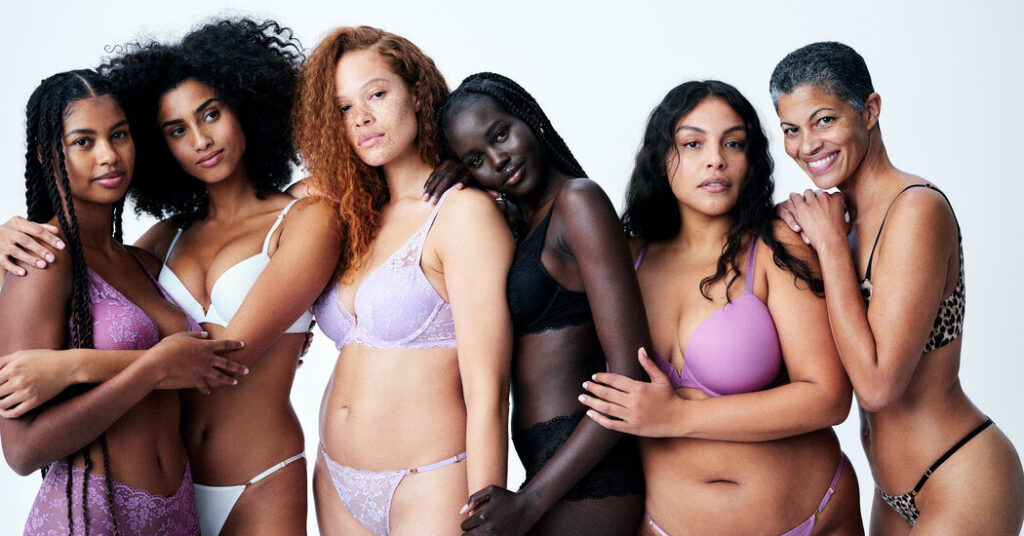 
When Victoria’s Secret announced, back in August 2021, that it was rebranding after years of falling sales and falling cultural credibility — that it would become a champion of female empowerment, replacing its bevy of supermodel angels with the VS Collective, ten women of great accomplishment as well as varying ages and body types — the news was met, generally (and understandably), with raised eyebrows.

The former home of high-kitsch male fantasy was going to become … the new Betty Friedan? It was hard to imagine.

Well, now a new ad campaign that “celebrates the Victoria’s Secret of today,” as a spokeswoman said, is here, promising “we’ve changed” and “we see you” and featuring women of different skin colors, ages, shapes and abilities, looking super-comfortable in simple silk bras and panties.

And guess what? A bunch of people don’t like the new look either, and took to Twitter to complain.

It is too “utilitarian.” No one wants such boring underwear. The message it is sending, said one observer, is that inclusivity isn’t glamorous. Bring back the wings — but put them on everybody!

Bring back the wings? Seriously?

It has been just over two years since Leslie H. Wexner, the founder of L Brands and the man who built Victoria’s Secret into a behemoth, stepped down as chairman and chief executive of the company after his ties to Jeffrey Epstein were revealed. Only two and a half years since Victoria’s Secret canceled its famous babes-in-thongland fashion show in the wake of the #MeToo movement.

And yet it seems as if a mass psychological event has occurred and half the world has forgotten the conversation about why VS, as it is now known, needed to change in the first place.

Forgotten that strutting around in stilettos, bikini bottoms and a push-up bra with a skirt of balloons attached to your heinie (as the models did in one show) was not really a dream outfit for anyone. Forgotten that the wings could weigh up to 30 pounds and made adult women look like naughty putti. That such inane outfits were part of what created a culture where men in power (including men in power at Victoria’s Secret) saw the young women around them as playthings to do with what they desired.

That bringing those outfits back in an inclusive way is just advocating for equal opportunity objectification, and there’s nothing glamorous about that.

For anyone who needs help remembering, there is “Victoria’s Secret: Angels and Demons,” a three-part documentary from the director Matt Tyrnauer airing on Hulu just in time for the new campaign. It looks at how the company got from the mythic Victoria — a well-bred Brit with a bit of a sensuous side — to angels emerging from a spaceship in silver bomber jackets with laser guns and matching undie sets.

Though the documentary doesn’t actually answer the questions it raises, which have to do with Mr. Epstein, Mr. Wexner and what exactly their relationship was (mostly, the talking heads say, essentially, “who knows?” and raise their eyebrows meaningfully), it does effectively trace the brand’s progression. How it went from a tasteful catalog company to an acceptable soft-core entertainment vehicle to what it is now.

How it went from a psychological stalking horse for all of our complicated feelings and frustrations about what, exactly, “sexy” means, and how you break a mold and mind-set that has been centuries in the making. Which is why, in the end, the rebranding has hit such a nerve.

The truth is, there’s no single answer and certainly no single brand with the answer to what is sexy because that is up to each individual. Yet the dominant images of lingerie are still those of binaries and extremes. It’s either thongs and naughty maids on Jessica Rabbit bodies or comfortable cotton undies in neutral tones on lots of bodies. Victoria’s Secret, the old version, or Dove and Aerie.

(To be fair, plenty of people find plain and comfortable sexy. As Megan Rapinoe, the soccer player and activist who is a member of the VS collective, told The New York Times about why she agreed to join: “I think functionality is probably the sexiest thing we could possibly achieve in life. Sometimes just cool is sexy, too.”)

In fact, the brands that are often held up as alternatives — Rihanna’s Savage x Fenty and Kim Kardashian’s Skims — slot pretty neatly into these two categories, stylistically speaking. The first is all maximal provocation in its game-playing, the second mostly minimal wabi-sabi (even if Skims, with its new swimwear ads featuring the newly divorced Ms. Kardashian as a camp California Stepford wife, seems to be edging into more cinematic territory).

And because those lines have celebrity female founders, ones who are themselves famously sexy, they are treated as somehow other. The theory seems to be that since the money she makes empowers a woman who publicly owns her own sexuality, that potency trickles down to the consumers they serve.

Perhaps. Or perhaps the real takeaway from all of this is that no one person or brand or size or shape gets to say what’s sexy — and that should be seen as a good thing.

That sexy in the end has to do with feeling at ease in your skin, rather than in any single garment. That there are as many definitions of the term as there are people in the world. And that actual empowerment doesn’t come in a bra and panty set. It comes out of it.