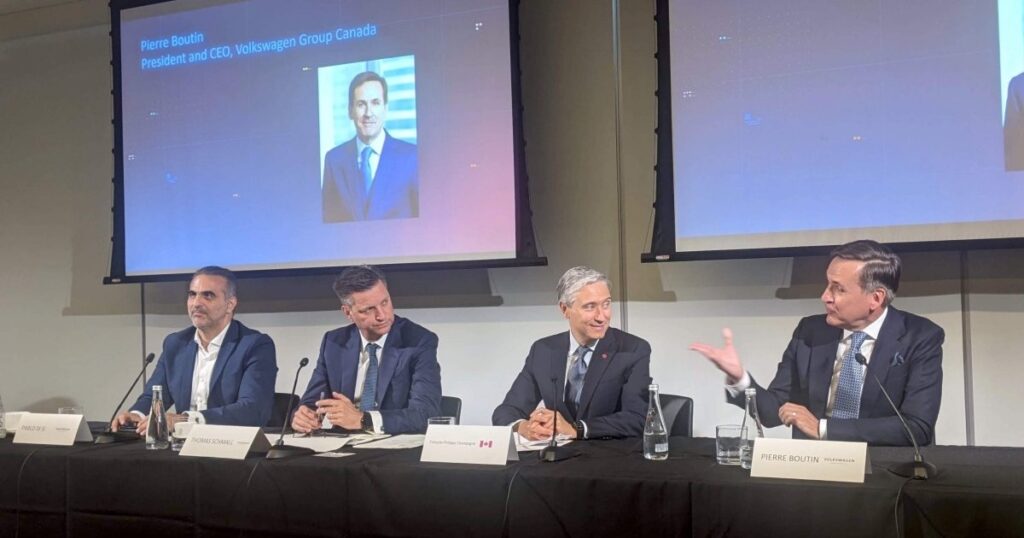 
Volkswagen Group is stepping into the Canadian battery materials sector as it re-evaluates its relationship with Canada and works to localize its North American supply chain amid the shift to electric vehicles.

The German automaker signed a deal Aug. 23 to collaborate with the Canadian government on opportunities throughout the EV value chain, as well as announced plans to set up a new office in Canada for its in-house battery unit PowerCo.

Volkswagen technology chief Thomas Schmall said the two steps will accelerate company efforts to get directly involved in the Canadian battery materials sector, establishing the country as a key partner for the automaker’s transition away from gasoline and diesel vehicles.

“It will be a strong pillar holding [up] our EV business [and] cell production, especially for the North American region,” he said at a Toronto press conference Aug. 23.

Volkswagen stopped short of announcing any firm investments in Canada, but François-Philippe Champagne, federal minister of innovation, science and industry, said the automaker’s memorandum of understanding with Ottawa and the addition of staff dedicated to battery supply chain development in Canada are “opening the door for future investments.”

VW’s prospective plans for Canada span the early links in the EV battery supply chain, namely mining, processing, cathode active material production and battery cell manufacturing, Schmall said. While that is the extent of the company’s current explorations, neither Canadian parts production nor vehicle assembly have been ruled out, he added.

Any material processing or manufacturing footprint in Canada would be a new development for the world’s second-largest automaker by volume. Volkswagen currently has North American assembly and parts plants in the United States and Mexico, but no footprint in Canada beyond sales and distribution.

Yet the automaker’s new chapter in Canada will start small.

Schmall said PowerCo’s Canadian office will open with three staff and scale up as the automaker’s Canadian involvement grows. The PowerCo team will focus exclusively on “the business of cell production and critical mineral supply chain,” Schmall said. Volkswagen Canada said PowerCo is still finalizing the details on a location for its Canadian office.

Volkswagen officially established PowerCo in July as it started construction on the unit’s first battery cell plant in Salzgitter, Germany. A half dozen other battery plants are expected to follow before the end of the decade, including one in North America with capacity to produce 20 GWh of cells annually. Canada is in the running, Schmall said, but the company is still evaluating prospective locations.

Decisions will come sooner rather than later, however.

VW plans to announce a site for its North American battery plant before the end of the year, Schmall said. It also expects to choose a partner that will provide it with cathode active material, and release “concrete details” on mining projects from which it plans to source material before the start of 2023. The automaker is evaluating all options to secure streams of battery materials, including making direct investments in Canadian miners, Schmall added.

The recent passing of the Inflation Reduction Act (IRA) in the United States could also influence EV supply chain investments in Canada, though Volkswagen leadership said it was not the impetus behind the accord with Ottawa.

Pablo Di Si, the incoming CEO of Volkswagen Group of America who will take over for Scott Keogh Sept. 1, said the new legislation will “only strengthen our strategy to localize more.”

The IRA adds more stringent rules for automakers looking to fully qualify for federal U.S. tax incentives, including a requirement to source an escalating amount of battery material from a country with which the United States has a free trade agreement over the next five years.

Di Si said Volkswagen had already drawn up its strategy to source battery material and localize manufacturing in North America, but the company would work toward meeting the updated requirements for the tax incentive.

“Now what we need to do is get the right partners, localize more, and the intent will be not only to have great products for consumers, but also … make the supply chain more resilient and hopefully the default will be to get the $7,500 credit in the future.”