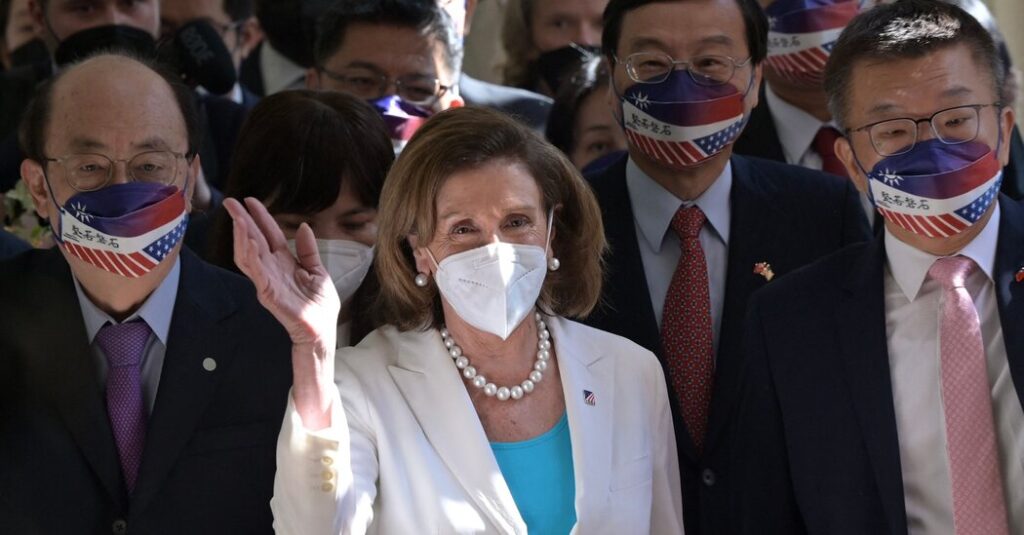 Speaker Nancy Pelosi left Taiwan today after a short visit that could have major repercussions. It drew unusual support from Republicans, condemnation from Beijing and quiet defiance from her hosts in the face of Chinese threats. But China experts predict more fallout may be ahead for businesses and investors from a trip that tested China’s appetite for confrontation.

“The world faces a choice between democracy and autocracy,” Pelosi said today during a meeting with Taiwan’s president, Tsai Ing-wen. “America’s determination to preserve democracy here in Taiwan and around the world remains ironclad.” Economic growth and trade were among her agenda items — along with the pandemic, climate change, human rights and democratic governance — but these were overshadowed by geopolitics and China’s fury at her visit to a self-governing island it considers its territory.

Among many other things, the trip was about chips. Pelosi spoke today with Mark Liu, the chairman of Taiwan Semiconductor Manufacturing Company, the world’s biggest chip maker. T.S.M.C. is building a plant in Arizona, and Pelosi and Liu reportedly discussed the recently passed CHIPS and Science Act, which offers subsidies to companies that open U.S. chip plants (more on that below).

China’s business backlash to Pelosi’s visit included banning some fish and fruit imports from Taiwan, but the broader impact could reach U.S. shores. Bloomberg reported that China’s CATL, the world’s biggest maker of batteries for electric cars, delayed its decision on a North American factory because of “tensions” surrounding the trip. Semiconductor company stocks slipped yesterday on mounting fears of conflict — especially China’s plan to hold live-fire military drills in areas encircling Taiwan starting Thursday. Liu of T.S.M.C. warned in a CNN interview this week that war over Taiwan threatens to disrupt the geopolitical landscape and the global economy, citing the effect of Russia’s invasion of Ukraine.

Robinhood lays off nearly a quarter of its staff. The company’s brokerage app surged in popularity at the start of the pandemic, but it is now losing customers, including 1.9 million active monthly users in the second quarter. Separately, New York State regulators announced that they were fining Robinhood’s crypto unit $30 million over violations of anti-money laundering and cybersecurity regulations.

Senators will propose a new regulator for Bitcoin and Ether. The legislation, backed by leaders of the agricultural committee, would make the Commodity Futures Trading Commission the chief regulator of the two largest cryptocurrencies. The S.E.C. has recently stepped up its crypto enforcement, arguing that many digital assets should be regulated like stocks and other investments.

Forbes is up for grabs. The company said it was exploring a sale after a deal to go public through a merger with a special purpose acquisition company was scrapped in May. Forbes is seeking a buyer at a time when digital media companies are out of favor with investors, and when the value of SPAC transactions has plunged 90 percent.

Blake Masters, a Peter Thiel-backed Senate candidate, wins the Arizona Republican primary. Masters, who was also endorsed by Donald Trump and has complained about “wokeness,” will face off against the Democratic incumbent, Mark Kelly, who won a special election in 2020. Other election results yesterday included a win for abortion rights in Kansas, and a poor showing generally for candidates following the Trump playbook.

Warner Bros. axes “Batgirl.” The studio, which spent $90 million on the nearly finished superhero flick, said it would never see the dark of a theater, or make it onto any streaming service. Warner said the decision was not based on the film’s quality, but was part of a new strategy to be more selective in the movies it releases.

The CHIPS Act has strings attached

Lawmakers used a shelved plan by Intel meant to expand its chip manufacturing capacity by taking over an abandoned factory in Chengdu, China, as an argument for passing the CHIPS and Science Act, The Times’s Ana Swanson reports. The legislation, which contains $52 billion in subsidies and tax credits for global chip manufacturers that establish or expand operations in the U.S., will hand significant power over the private sector to the Commerce Department.

“This is not a blank check to these companies,” said Gina Raimondo, the commerce secretary. “There are a lot of strings attached and a lot of taxpayer protections.” Her department has the authority to review future company investments in China and to claw back funds from any firm that it deems to have broken its rules, as well as the ability to make certain updates to the rules for foreign investment as time goes by.

China’s increasing dominance of key global supply chains has generated new support among Republicans and Democrats for the government to nurture strategic industries. South Korea, Japan, the European Union and other governments have outlined aggressive plans to woo semiconductor factories. And the production of many advanced semiconductors in Taiwan has become for many an untenable security threat. “The question really needs to move from why do we pursue an industrial strategy to how do we pursue one,” said Brian Deese, the director of the National Economic Council.

The bill still has plenty of critics. In focusing its restrictions on newer generations of semiconductors, the legislation could leave the door open for China to dominate the production of older chips that are used in cars and other consumer products. Some Republicans, like Senator Marco Rubio of Florida, say the guardrails aren’t strong enough to prevent U.S. technology from leaking to China. Some Democrats and their allies, like Senator Bernie Sanders of Vermont, describe the bill as a corporate giveaway.

How efficiently will the funds be spent? The disbursement of tens of billions of dollars in the coming years is likely to raise many questions about how those investments are allocated. And it may touch off more jostling among semiconductor companies that spent more than $20 million on lobbying in the first half of this year alone, according to their disclosures. A 10-year ban on investments in more cutting-edge facilities in China has been particularly contentious, with firms arguing that it would make them less competitive globally and ultimately set the U.S. back in a race against Chinese competitors. But there are signs that the ban is already having an effect: Two South Korean chip makers are reportedly rethinking their investments in China.

“I’ve tried three courses and one expert on the side, and the only thing I got out of it was an empty wallet.”

— Scott Mitchell, 33, who is one of many people trying to make money through an approach called YouTube automation.

There is a ghost lurking in the background of Penguin Random House’s proposed $2.2 billion deal to buy its rival Simon & Schuster, writes our colleague Shira Ovide, the author of The Times’s subscriber-only newsletter On Tech. (Spoiler alert: It’s Amazon.)

Yesterday, Stephen King, the best-selling author known for his horror books, testified in support of the lawsuit filed by the Justice Department to block the merger. It’s one of several efforts by the Biden administration to stem what it has said is excessive concentration in the U.S. economy.

The administration says the merger will hurt authors. The deal will shrink the number of large American publishers of mass-market books to four from five. King testified that the options for authors to get published have decreased since he started selling books in the mid-1970s. With fewer imprints competing, King said, advances have slowly dwindled, particularly for writers without a track record of sales. The merger of two of the country’s largest publishers would make it even harder for writers to earn a living, he said.

But, Ovide argues, the trial is haunted by the specter of Amazon. “Book publishers want to become bigger and stronger partly to have more leverage over Amazon, by far the largest seller of books in the United States,” she wrote. “One version of Penguin Random House’s strategy boils down to this: Our book publishing monopoly is the best defense against Amazon’s book selling monopoly.”

Companies have long tried to justify acquisitions by saying they are trying to level the playing field.

Nonetheless, Ovide says, another mega-merger is unlikely to solve the book business’s concentration problem. Competition experts told her that the best way to deal with Amazon’s dominance in books is not to allow publishers to become monopolists themselves, but to deal with Amazon’s outsize power with laws, regulations and enforcement. There’s growing bipartisan support for such a move, but don’t hold your breath.

“This legal case about book publishing is a window onto deep-rooted problems in the U.S. economy,” Ovide wrote. Those problems “took decades to make and will take a long time to change.”