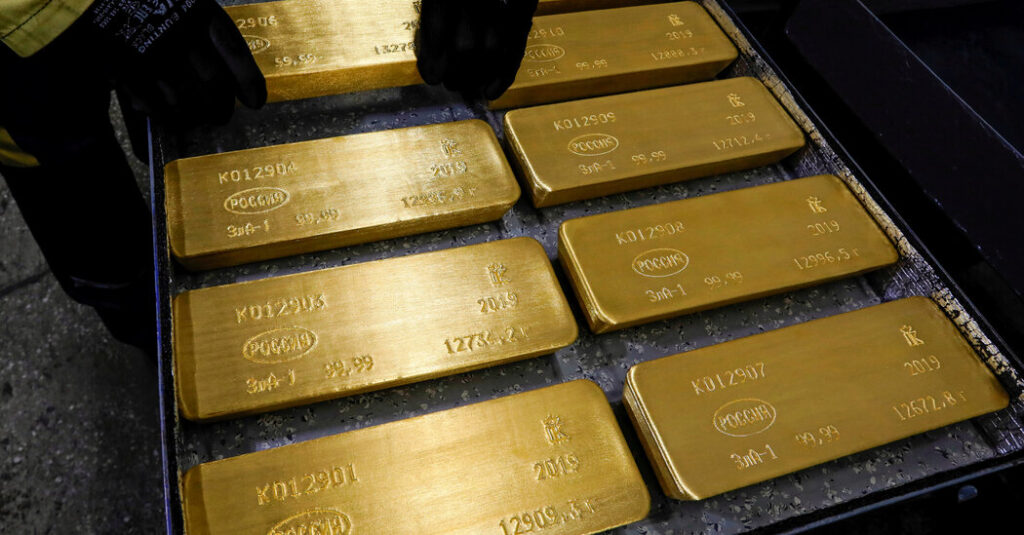 What the ban on Russian gold imports means for its increasingly isolated economy.


The decision over the weekend to ban the purchase of newly mined and refined gold from Russia is the latest effort by the United States, Britain and their allies to dial up the wave of sanctions they have imposed on Russia in response to its four-month-old invasion of Ukraine.

The announcement, made as President Biden and other leaders from the Group of 7 nations gathered for meetings this week in Germany, builds on steps already taken to cut Russia off from the international financial system, to deprive it of additional revenues that are helping fund its war in Ukraine and to punish President Vladimir V. Putin of Russia and wealthy business executives in his circle.

Ukraine’s allies have already prohibited most trade with Russia, frozen hundreds of billions of dollars of assets belonging to the Bank of Russia held in their own financial institutions and blocked Russian banks from using the messaging system that undergirds the system of international payments known as SWIFT.

The Bullion Market Association in London, which is a major hub of the global gold trade, suspended transactions with six Russian silver and gold refineries in March.

Russia, one of the world’s biggest producers of gold, cranked up the mining of new gold to compensate for some of the paralyzed assets, Christopher Swift, a national security lawyer at Foley and Lardner, said.

“In order to make up for reserves held by Russian companies and oligarchs, they brought new gold online,” said Mr. Swift, who previously worked at the Department of Treasury’s Office of Foreign Assets Control. “The G7 is shutting down access to this new gold.”

Russia’s billionaire business magnates have been buying gold bullion in an attempt to blunt the impact of the sanctions. Prime Minister Boris Johnson of Britain underscored the point on Sunday, saying the move would “directly hit Russian oligarchs.”

The ban is also aimed at depriving Russia of new revenues earned from exporting gold, which is used for jewelry, in some industrial processes and for investment. As is often the case during crises, the purchase of gold for investment has jumped since the coronavirus pandemic started upending the global economy. And central banks, including the Federal Reserve, have often been big buyers through intermediaries.

After the early rounds of sanctions had stopped much of its existing international gold trade, Russia’s central bank announced that it would resume buying domestically produced gold, which was also seen as a way of helping to prop up its currency. Roughly 20 percent of the $600 billion in reserves held by Russia’s central bank is in gold, estimated to be worth $100 billion to $140 billion.

“Fundamentally this is an incremental tightening of the sanctions rather than a significant escalation,” Mr. Swift said. “If your goal is to undermine Russia’s economic ability to wage war in Ukraine, this is a necessary but not sufficient measure.”

Ever since the war started, European countries, which are heavily dependent on Russian oil and gas, have been in a difficult dance, looking to punish Russia without inflicting too much damage on their own economies.

Last month, after weeks of tense negotiations, the European Union agreed to largely ban the import of Russian oil by the end of this year. But so far the question of whether to ban Russian gas — which is much harder to find a substitute for than oil — has been off the table. Germany’s government and industrial leaders have warned that a gas embargo would be catastrophic for its economy.

“If the G7 wants to have a strategic effect then they really need to think about what they’re going to do about Russian gas,” Mr. Swift said.