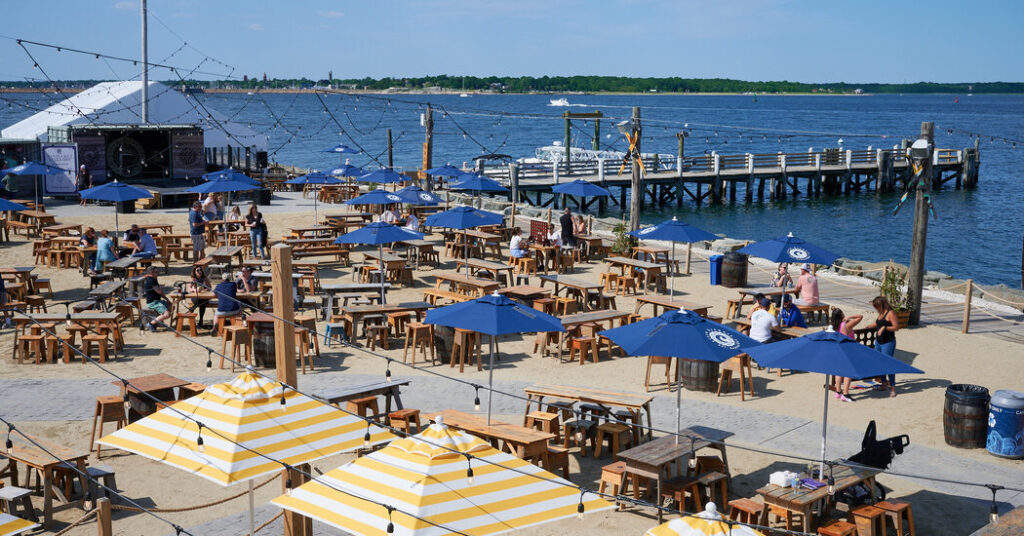 What To Do in New Bedford, the Old Whaling Capital Outside Boston


“I have some folks here who are painting the other side of the house,” my Airbnb host messaged me before a road trip to New Bedford, Mass. “The guys are really quite awesome/talented artists, lots of good vibes.”

Indeed, when Aaren, my travel partner, and I turned off County Street to find our home for two nights — a one-bedroom apartment in an 1855 Victorian that was once apparently rented by Herman Melville’s sister — three painters were industriously updating the house’s exterior with cream, orange, blue and warm gray colors.

These days, the entire city, approximately 60 miles from Boston, seems to be getting a fresh coat of paint. Signs of rejuvenation are everywhere, from a park honoring abolitionists to new murals on old buildings.

Once the world’s wealthiest city per capita and a powerhouse in whaling and textile manufacturing, New Bedford fell into decline in the mid and late 20th century, enduring a high crime rate, high unemployment, urban blight and bad jokes (“New Bedford: The armpit of Cape Cod, maybe the nation”). If they stopped at all, many travelers would stay only for a meal, or a visit to the New Bedford Whaling Museum, before continuing via ferry to Martha’s Vineyard or driving Interstate 195 to Cape Cod.

Yes, New Bedford continues to lean heavily into its maritime past: Not only did we stay at the charming Whalehouse and visit the Whaling Museum, we also ate at the Whaler’s Tavern and toured a restored mansion built on whaling money. But there’s a focus on the present, too. Old textile mills are being reimagined, new restaurants are thriving and exhibitions and parks are expanding to better tell the city’s long history of promoting equality. Museums, downtown artist studios and performance spaces speak to investment in the creative class. As for the future, the first train service from Boston since the late 1950s is expected to start next year. (Its planned route is not without complaints.)

Thanks to health care and commercial fishing and other maritime industries, New Bedford remains a working city. It does not rely on tourism, though everywhere we went, we met proud, invested residents — from the volunteer docent at the Whaling Museum to the curator at New Bedford Free Public Library to the waitstaff at restaurants.

“There’s no Cape Cod pretentiousness in the city, because we’re not really Cape Cod. We’re the South Coast,” said Allie Copeland, the curator, adding that New Bedford “has a very cool kind of vibe now.”

Our first evening, after stopping at the Quahog Republic Whaler’s Tavern for a golden ale and a Mai Tai, Aaren and I met Bev Ehrich and Carl Freedman eating outside on one of the city’s cobblestone streets. The couple had recently moved from Providence, R.I., to the nearby village of Little Compton. They had driven in for dinner with another couple at Union Flats, a seafood restaurant that opened this winter. The four friends raved about the monkfish and mackerel (later we inhaled seared scallops, fresh and cooked perfectly), as well as the city’s jazz and other cultural draws.

“The only reason we used to come here when we lived in Providence was to get the ferry,” said Ms. Ehrich, 69, a retired university administrator. “Now we are coming for fabulous restaurants, museums and music.”

In 2017, Margo Saulnier began her role as the creative strategist for the city of New Bedford, charged with implementing an arts and culture program. Since then, the city and partners have used grants and other funding to host free events, solicit and assist local artists to create public murals and more.

“The more that we invest in our creative economy and our local talent in arts and culture, the better it is for everyone,” Ms. Saulnier said. “And that includes people who live here and people who visit here.”

For the people who visit, New Bedford can be relatively inexpensive. The art collection at the New Bedford Free Public Library displays work by contemporary artists like Adrian R. Tió, as well as old favorites from Ralph Fasanella, Albert Bierstadt and John James Audubon. At the Cape Verdean restaurant Izzy’s, a heaping can’t-eat-fast-enough breakfast of cachupa rafugado, scrambled eggs and linguiça costs $13. The “See NB in Three” pass, $18 for adults, allows entry to the New Bedford Fishing Heritage Center, New Bedford Art Museum and the Rotch-Jones-Duff House & Garden Museum — whose rose beds alone are worth the fee.

The collapse of the whale population at the end of the 19th century came as enormous textile mills were being built, transforming the cityscape. But as manufacturing in the South and overseas gained prominence in the mid-20th century, these factories closed and New Bedford languished. The situation grew bleaker in the 1990s after local fisheries collapsed.

“For 50 or 60 years, there’s been nothing going on because the textile plants closed up,” said Mr. Freedman, 71 and a lawyer, at Union Flats, speaking of New Bedford and other old New England mill towns. “Those energy-consuming industries will never fill these big buildings ever again. And that’s why reimagining these buildings is the future.”

I spent the next morning walking around one reimagined mill in the city’s South End neighborhood. Kilburn Mill, built in 1903 and expanded in 1910, is a three-building complex now home to shops, gyms, music performances and the bright, plant-filled Dough Company restaurant, which sells a delicious “Green Giant” egg sandwich ($8) — one with greens, pickled onions and goat cheese.

Breakfast fueled us as we toured downtown museums and strolled the streets. On one block alone, I discovered a toy store, a used record store and a witch shop called ​​Sanctum Folklorica. The highlight of the day was the Whaling Museum (adults, $18), dedicated to the brutal industry that transformed New Bedford and the world. Through a rich collection — whale skeletons hanging from the ceilings, an explorable replica of a whaling ship, art collections and more — we learned not only whaling history, but also the creatures’ biology and behavior, the threats they face and conservation efforts.

The museum also looks at the people powering the industry, starting with local Native Americans, and the mariners who came from around the world, including Cape Verde, the Azores and mainland Portugal, and settled here. (Through culinary and other cultural influences, their presence remains strongly felt.)

One expanded exhibition at the museum and nearby park are dedicated to Captain Paul Cuffe, a Quaker born locally to a Native American mother and African father in 1759. At a time when many Africans and African Americans were in servitude, Cuffe ran blockades during the Revolutionary War and later became a wealthy shipowner and captain, using his influence to petition the state for the right for landowning men of color to vote, and to establish one of the country’s first integrated schools.

Throughout the city, we learned about New Bedford’s ties to Quakerism, which contributed to the city becoming a stronghold for abolitionism, a station on the Underground Railroad and establishing a recruiting office for one of the first African-American regiments in the Civil War.

This fall, the New Bedford Historical Society, along with the city, plans to unveil a park dedicated to the area’s abolitionist movement. Abolition Row Park, built on an unoccupied corner lot, will include a statue of Frederick Douglass, a gazebo and community garden space.

“What we have been intentional about — and are funding — is the certain stories that have not been told, or have not been told to the masses,” Ms. Saulnier said. “There is this renewed sense of celebrating that past.”

Our last evening, we biked south to the Harborwalk, a walking and biking trail on the hurricane barrier that protects the New Bedford Harbor. The massive sea wall, built in the 1960s, rises 20 feet above the Acushnet River and offers views of lighthouses, ships and passing ferries. Just beyond one set of its massive barrier gates lies Cisco Brewers Kitchen & Bar, a 3.5-acre restaurant and bar outdoor space that opened last June and welcomes dogs, children and beer lovers with picnic tables, live music and a dock for water-going guests. Aaren ordered food to share and two hazy I.P.A.s, and we settled in to enjoy the scene.

Farther south is the city’s East Beach and Fort Taber Park, a 50-acre green space and military museum, but those would have to wait for another visit. We finished our fried clams, listened to one last song and, in the cool ocean breeze, got back on our bikes.

PrevPreviousOver 360 newspapers have closed since just before the start of the pandemic.
NextF.C.C. Commissioner Pushes Apple and Google to Remove TikTokNext